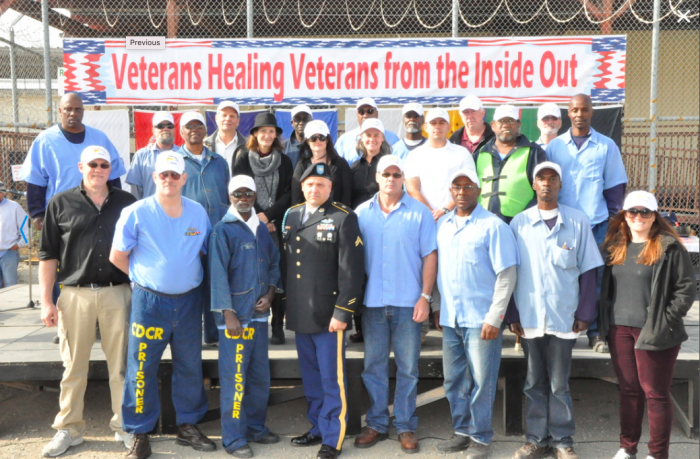 It had been slightly over one year since my path of ministry and chaplaincy led me to become a volunteer at San Quentin State Prison.

I have had the great privilege of assisting in forming a new group for incarcerated veterans, “Veterans Healing Veterans From the Inside Out.” This group is the brainchild of Ron Self, former Marine and currently incarcerated prisoner at San Quentin State Prison.

They gathered the names of the 6,700 men and women who died in combat in the Afghani and Iraq wars. They were particularly moved to include the 48 suicide attempts of soldiers each day since the wars started. This fact moved me deeply; these “forgotten men” wanting to honor the “forgotten men and women,” the unspoken victims of recent wars.

As I approached the typically crowded prison yard on Veterans Day morning, I was struck by the emptiness in front of me.

I anticipated seeing the press, numerous outside guests, and hundreds of inmates I expected to see. Instead, I walked toward 50 empty chairs set in rows in front of a stage flanked with an American Flag on one side, an MIA/POW flag on the other side, no inmates, one guest, and one organizer.

The guest read her sheet of 50 names to a crowd of one. The brilliant blue sky was witness to these names that were once given to an infant. There was a surprising absence even of the birds that generally flock to the yard.

I sat down and was told there had been an “institutional recall” this morning, which meant that none of the inmates were allowed out onto the yard. Nevertheless, the stage, chairs for an audience, podium, microphone-and stunning banner “San Quentin- Veterans Healing Veterans From the Inside Out” were impeccably in place.

Behind the banner were 48 blank dog tags representing the 48 daily suicide attempts of US soldiers in Iran and Afghanistan. Names of the 6,700 identified soldiers killed in war had been printed out on 134 pages and distributed to dozens of inmates who wanted to honor them. Because of the recall, one guest read the names of the deceased to an audience of two.

I took a deep breath and sat with this reality, another power struggle, another good intention thwarted, but was it? I looked to the deep blue sky as each name was read.

Luckily, within the hour, the recall was partially lifted. The inmates began filtering down to the stage area and lined up to read their page of names. One of the men came with a Buddhist bell, which was struck for each name read; each mother, father, sister, brother, son, or daughter killed in the wars.

The event officially began. It was announced that the bell would ring ten times to remember those who had taken their own lives on the hour. The names continued to be read.

At the same time, the many hundreds of birds who frequent the yard began flocking around us: seagulls, geese, ducks, pigeons, red-winged blackbirds, sparrows, crows. It was as if the birds were linked with the spirits of the soldiers whose names we were calling out. The birds, regardless of species, spiraled around the stage, up, up into the sky, then dove down to the stage to begin another spiral up to the wispy clouds.

Also, at the same time, the Native American inmates, many of them Veterans of our wars, began building a fire right across from where we were sitting, next to their sweat lodge. The smell of wood smoke added another dimension to the reading of names; comfort, warmth, transformation. And the many birds continued their spirals above the stage. As the fire settled, the men tending the fire-roasted flatbread and chicken offered it to those of us bearing witness.

And the names continued to be read. A few guest speakers, Veterans from many wars, spoke on different issues common to Veterans, common to humans, common to war. As one World War II Veteran approached the stage, two fighter jets flew over the prison yard in tight formation, as if in tribute to this event, this monument of remembrance. They flew over the prison a few more times. Each time, the reading of the names quieted, and the Veterans present watched the graceful yet fierce sound and sight of these planes, everyone absorbed for a moment in all they had in common.

Also, for an hour or so, law enforcement officers at the shooting range on the hill above us began their target practice. Oddly, the sound of multiple guns going off became synchronized with the speaking of the names. It was as if the people being named, suicides or not, were getting a military send-off. Wood smoke wisped. Birds spiraled. 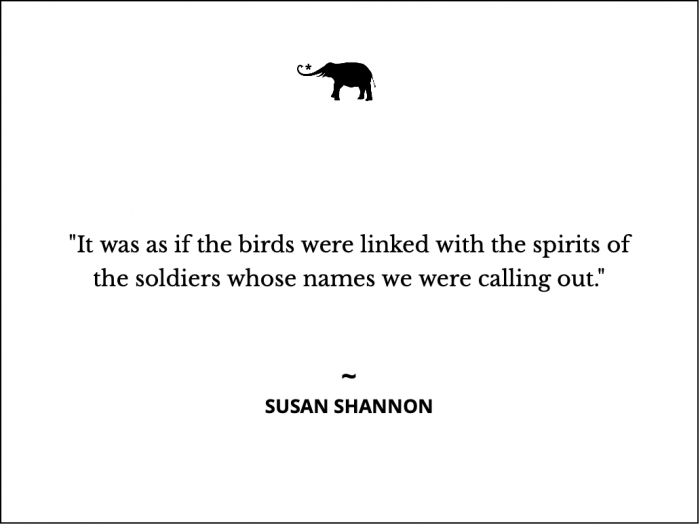 I sat in awe and felt honored to be there, hearing the names of these mostly young people who had died in these wars. I found myself going into a deeply meditative space, with all the birds, smells of wood smoke, names, the bell, gunshots, jets.

Each time a name was read, I said a silent prayer for the mothers, fathers, families, communities, and all the positive intentions that were alive at one time within these mostly young beings. I was struck that most of them were under 23 years old.

The hours went on; the bell rang for every name.

Now and then, an outside person got up to speak for a few minutes. Despite the call to the “outside people” to attend, there were not many guests, maybe ten counting me. Finally, toward the end, I was nestled between two inmates. We sat in silence, now and then sharing a word or two, but the tone of the day was so deep with reverence and respect, there was not much room for words.

I am so deeply moved to have witnessed these forgotten men remembering the other forgotten men and women in this reverent and meaningful way.

I wish the press had been there.

I urge every one of you reading this today to match the intention of the San Quentin Veterans. Let’s remember those who are forgotten, especially the suicides. Let’s continue to educate ourselves on combat-induced Post Traumatic Stress Disorder and Moral Injury. Let us continue to do our part to create a society where anyone who intends to help others, be it former inmates or former soldiers, will have a place of peace to do the hard work of reconnecting with the community. 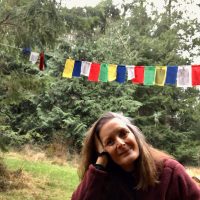 Susan Shannon, M. Div., BCC, is a seeker, educator, earth and animal steward, and devotee of the heart. She has worked in the fields of Emotional Literacy and Restorative… Read full bio