Why the G-Spot is Patriarchal & how to (really) Center Female Pleasure. {Adult, Partner} 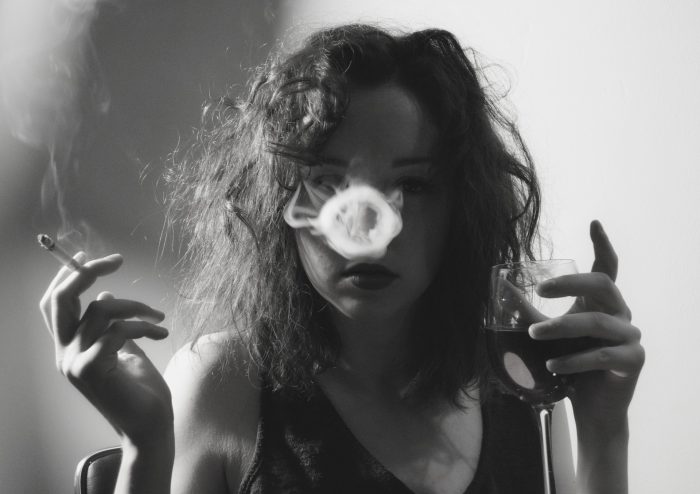 This article is written in partnership with Je Joue—they’re dedicated to sexual pleasure and empowerment. We’re honored to work with them. ~ ed.

I wouldn’t say I’m a prude, but I’ve definitely never chatted about the G-Spot at a dinner table or, err, anywhere.

Even typing it out feels illegal. I feel like I should shut my laptop immediately and call my mom to apologize for using such language.

I’m all about changing the narrative around women’s pleasure, bringing more conversations about it to the forefront, and working on unpacking my own deep-seated shame around sex as a woman—but for some reason, the G-Spot conversation feels like it trots right over some manufactured sex threshold.

Why does it feel so, well, touchy?

Thankfully, I didn’t need to deep dive into that answer on my own. Our close friends, makers of my favorite toys of all time, and agents of women’s pleasure, Je Joue, have got all there is to know about the magical, mystical, and mysterious Spot of G (and some phenomenal toys to tap into it with).

History has a Rocky Past with Women’s Bodies—because of, well, Men.

Before we can get a handle on the present, we’ve got to look at the cumulative history behind my (and maybe yours, too) discomfort with the G-Spot topic that informed me my coyness wasn’t groundbreaking—it was intentional. I’ll explain.

Medical writers from as early as the 16th century believed women’s anatomy to be deviant from the male form, and “othered.” It wasn’t until the 1700s that men were brought into the midwifery industry, with much trepidation from just about everyone.

Welcoming men into the birthing room posed a problem: what if the men became aroused by the process of labour, and the naked bodies of the new mothers?! (Eye roll).

As per usual, the responsibility of controlling men’s thoughts was placed onto women, resulting in the complete separation of the woman’s genitals from the rest of her body in the eyes of medicine—a mindset which has resulted in the lackluster research into women’s sexual and reproductive health, which still permeates today. (1)

Yeah, so mystifying women’s pleasure has been going on longer than the United States has been a country, and even well before that. No wonder owning our pleasure seems radical now, especially when it comes to arguably the most controversial erogenous zone: the G-Spot.

Own your pleasure & get exploring with some toe-curling toys. Use code EJ25 to get 25% off when you spend $90 or more >>

The “spot” was officially recognized in 1980 for Dr. G(räfenberg), and the rest was history, and still shrouded in a whole lot of mystery. The thing is, with an overwhelming prominence of male doctors writing the books on women’s anatomy, there was more male bias on the pages than there was ink. That’s why ladies, it’s time to take the G-Spot exploration into your own hands (literally).

Let’s begin decoding the G-Spot with a li’l insight from Dr. Jennifer Berman, MD, a urologist and female sexual medicine specialist. Ah, a breath of fresh air. According to her expertise, “​​the area can be found along the inner front wall of the vagina—the top wall if a woman is lying on her back. It’s a few inches up, about a third of the way, although it varies from person to person.” (2)

Our friends at Je Joue would call this the G-Zone—an area where some women are fortunate enough to enjoy the sensation of their aroused clitoris through their vaginal wall—rather than a distinct “spot” that every woman seems to have “hidden” somewhere. 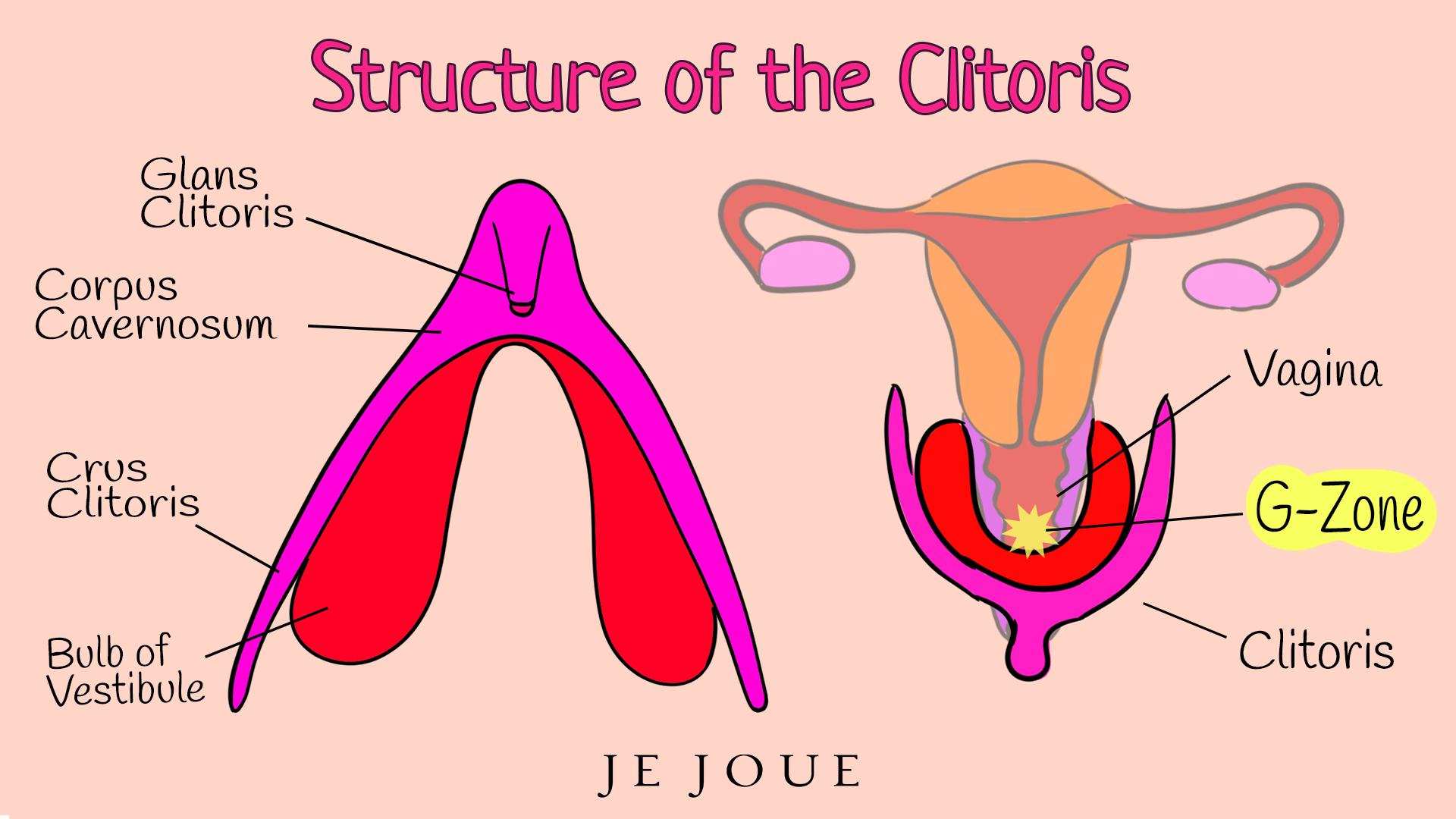 The variation of its exact coordinates isn’t the only reason there’s doubt and debates perpetually present in the medical field. Aside from the male dominated origins of medical writing, there’s been a vested interest in proving its defined existence from plastic surgeons who have offered G-Shots—the injection of filler to the region believed to enhance orgasms. Yes, it’s a thing.

Some have actually coined it the female prostate, “since the area may be similar in structure and function to the male organ located between the penis and the bladder. One comparison often made is that both spots—the G-Spot in women and the prostate (also considered the ‘male G-Spot’) in men—can trigger or contribute to orgasm when stimulated.” (2)

These toys are absolutely G-enius.

Since every woman’s body type, genetics, age, and life experiences vary, exploring your body with toys or a partner is the key to getting your finger on the pulse of your G-Zone, and the more areas you’re able to access to do that, the better.

That’s especially true because it hasn’t always been exactly, well, accessible to find the right toys to take the “G-Spot” for a test drive. Manly medical misinformation has informed the straight, phallic sex toys of the past that we’d frankly grade with an F. Thankfully, along with the advancement of knowledge around women’s bodies has come some welcomed revisions to the sex toys of yesterday, like the luxury convertible of vibrators: the G-Kii. 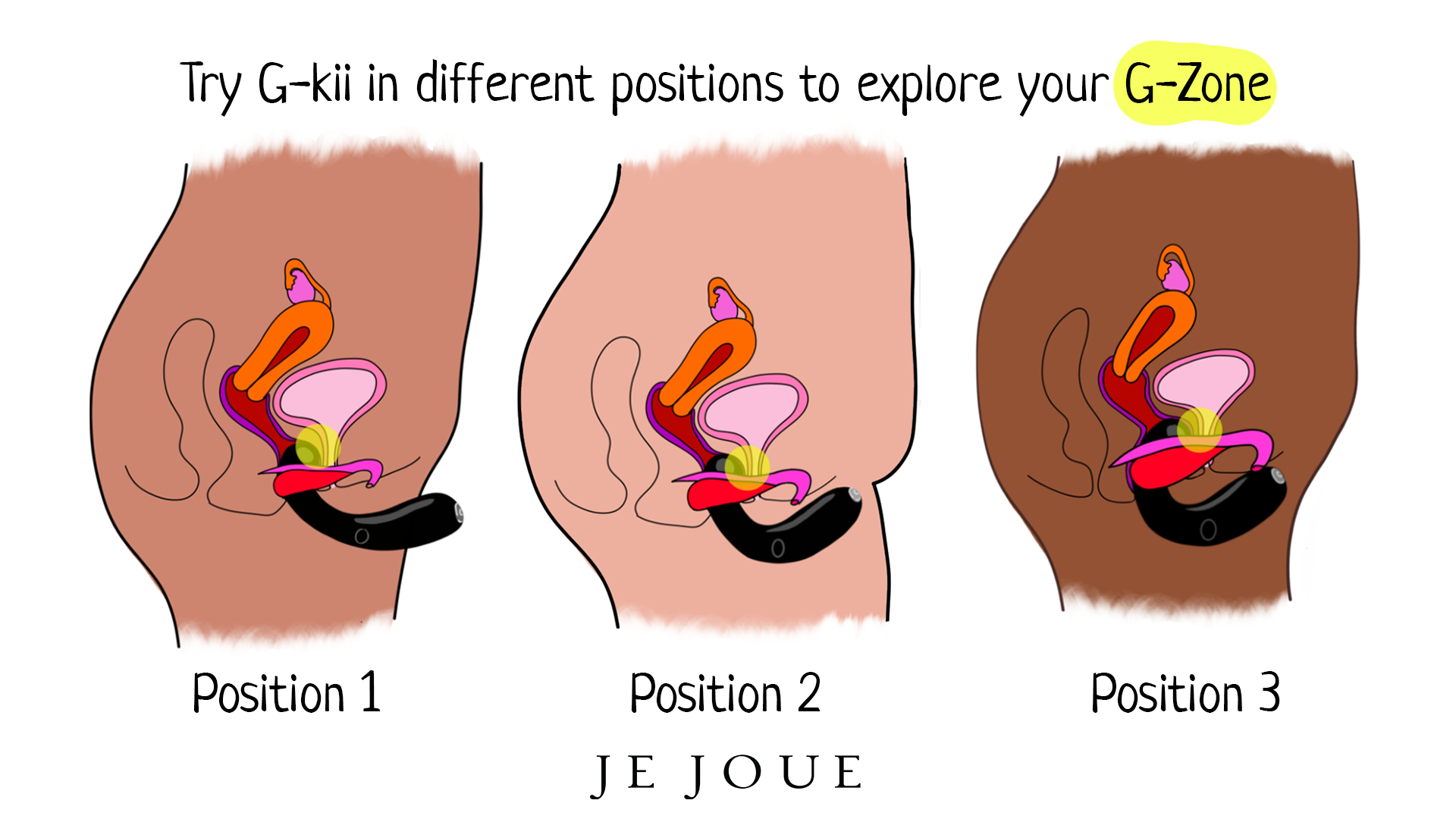 Je Joue worked with the Gynecological Association to compare the measurements of over 10,000 women and crafted a toy that’s as unique as each woman’s body.

The G-Kii is customizable to suit all the beautiful, sexy shapes and sizes that women come in (literally). It can curve into five different positions, so that you can experiment with accessing the clitoris and G-Zone (shown in yellow above) from different angles, or both at the same time for dual stimulation. If you’re really wanting to dive in, you could even access the intense, sought-after “blended orgasm.”

There’s a consensus that there’s a different kind of sensation between orgasms that involve internal as well as external clitoral stimulation. In medical studies conducted in the 1970s, “women described [external only] clitoral orgasms as ‘localized, intense, and physically satisfying,’ and internal vaginal orgasms as ‘stronger and longer lasting’ and ‘more psychologically satisfying,’ with ‘whole-body sensation’ and ‘throbbing feelings.’” (2) 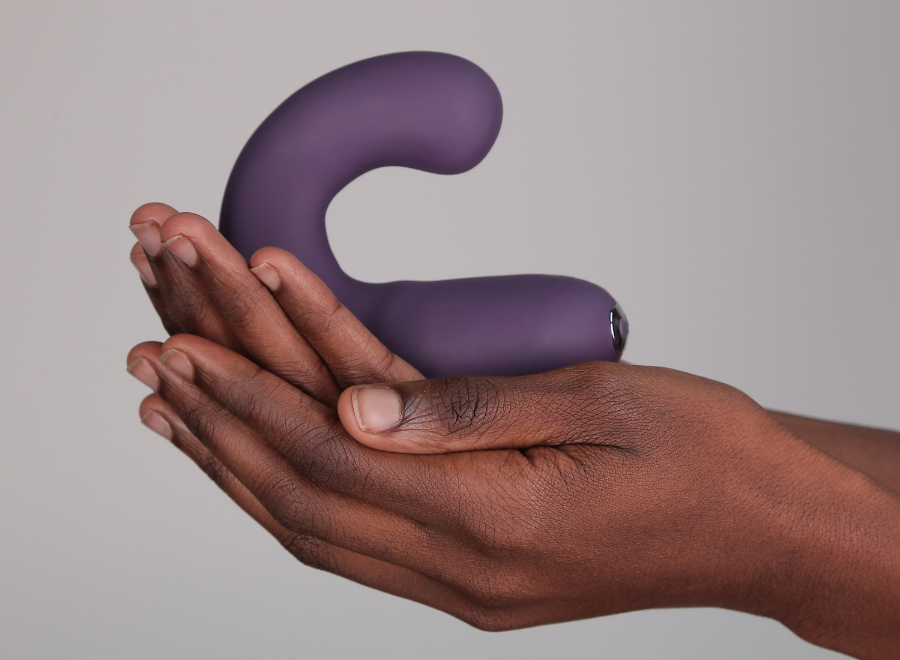 That distinction plays into why Je Joue’s equal-orgasm-opportunity toys are designed with ultra-low-frequency vibrations to give you the best of both worlds. These vibrations travel deeply into the body, accessing all of the internal pleasure points that a buzzy vibe simply can’t reach. Trust me, they get the job done.

If you want to just dip your toe into the G-Pool to see how wet you’ll get, you could always start with the G-Spot Bullet first. It’s smaller, lighter, and has a soft, squishy tip for more delicate tastes. The soft curve follows the natural contours of the body, perfect for stimulating more of the clitoris externally, and for exploring your G-Zone internally.

Since the clitoris is the true queen of women’s pleasure points, a low-frequency, rumbly bullet is going to be the crowned jewel of your bedroom. If you’ve ever tried a cheaply-made, battery-operated bullet in the past and decided it wasn’t your thing (don’t blame you, girl), then I’ll just say this—you won’t regret giving this one a go. 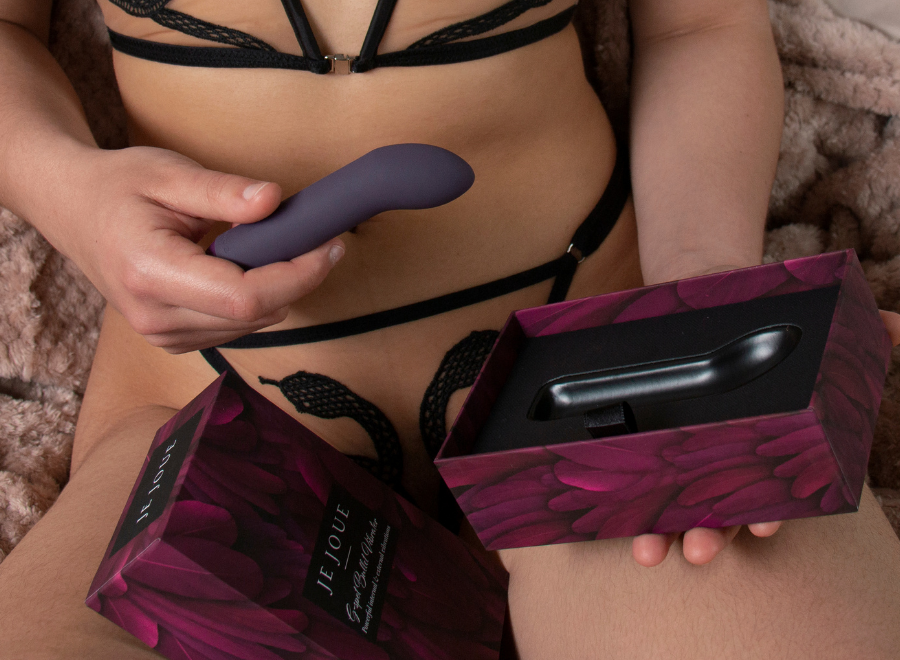 Regardless of which toy you use, the key is to relax and not fixate on “trying to find the right spot.” Your body and pleasure preferences change and evolve as much as we do in every other part of our lives. Trust your body’s unique experience, and be patient while you play.

It takes a healthy dose of foreplay to even give your body a chance to slip into sweet, sultry pleasure. Actually, it takes about 40 minutes on average for the clitoris to become fully erect, so if you’re on a G-Zone excavation, I recommend clearing your calendar for the evening—or morning, whatever tickles your fancy. 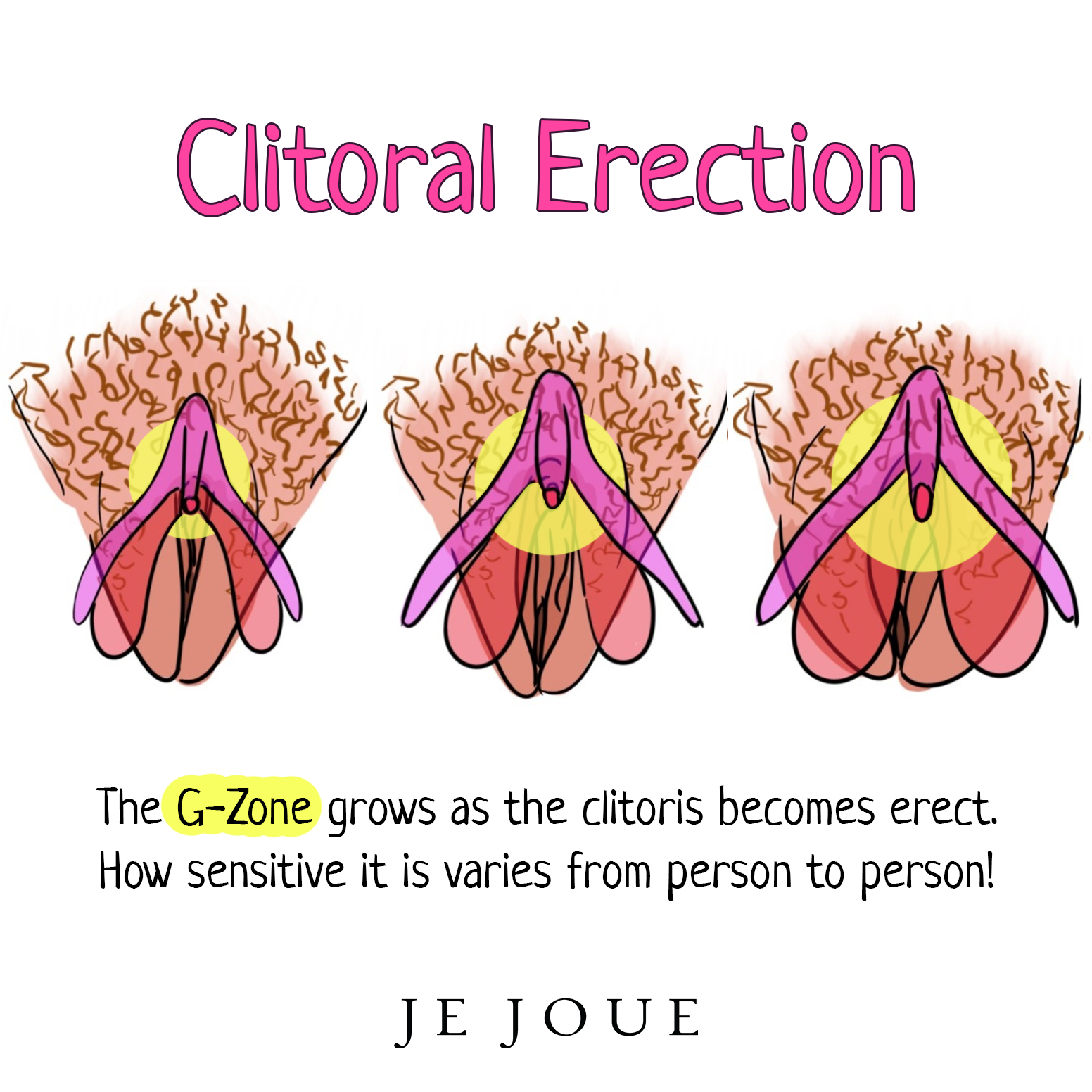 So, go head, gather up some toys and get G-oing. Forget about cobweb-collecting belief systems about women’s bodies, put your clitoris on the pedestal it deserves, and don’t listen to what anyone has to say about your body other than you—you can decide for yourself if that’s the spot you want to hit.

And don’t forget to have a hell of a lot of fun getting in the G-Zone.

Spoil your Special Someone (or Yourself)

1/5
Beautifully packaged in Je Joue’s rose gold feather design, this box is more than just a gift, it’s a gesture of love, and a promise to spend more quality time with the person you love. Spoil that special someone in your life with this limited-edition sexual wellness gift box.
Shop with code BLACKELEPHANT
< Previous Next >

2/5
Perfect if you prefer a more hands-free experience, taking the effort out of holding it in place. Simply slip your bullet into the circular side and your (or your partner's) fingers into the oval shaped side. Use the bullet directly on the skin for powerful all over vibrations. To experiment with sensations move the bullet to the back of the fingers to keep the skin touch, with added vibration.
Shop with code BLACKELEPHANT
< Previous Next >

The Silky Sub-Woofer of Vibrators

3/5
The versatility of the Mimi Soft means you can use it on any pleasure zone you want to stimulate. Use the flat side for more dispersed vibrations over a wider surface area, such as the entire vulva. Or enjoy the squishy edge for softer direct pleasure. You can even cradle the Mimi Soft in your palm and have the vibrations travel down your fingertips for an even more gentle sensation.
Shop with code BLACKELEPHANT
< Previous Next >

5/5
Strong and flexible for pleasure à deux. Beginner: Stretch Mio and slide it down to the base of the penis. You can then position the vibrating part upwards so that it comes into contact with your partner during sex, or downwards against the balls. Advanced: Before getting hard, stretch Mio around both penis and balls for a stronger erection and overall sensation.
Shop with code BLACKELEPHANT
< Previous Next > 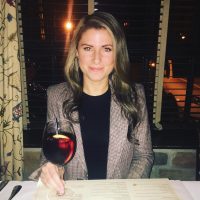 Kaitlin is a New Jersey native who explored Virginia living in her early twenties and returned to New Jersey for the bagels, she is on a self-exploration journey in the form o… Read full bio

The Buddhist Quote I Can’t Stop Thinking about Since the Turkey-Syria Earthquake.