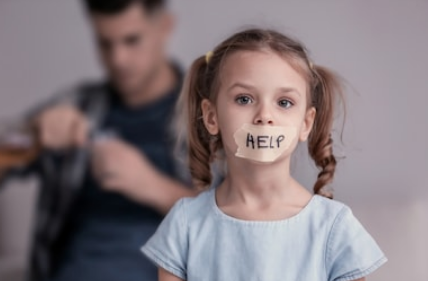 Imagine yourself, an innocent 7, 8, 9 year old girl who has just ‘survived’ a confusing encounter with a man, an authority, a respected friend of her parents, a teacher, caretaker, or even more likely, a family member. Someone she trusted — up until this moment — who, as he puts his penis back in his pants, threatens in a low growl “Tell anyone what just happened and you’re in trouble. I’ll tell your parents what you did, you dirty little whore.” The warning from this man — two or three times her size — who has just removed his suffocatingly heavy body from hers is beyond terrifying. It’s debilitating.

Emerging dazed and disorientated from this confusing mess of bodily fluids, suffocation, fear and reeling from the physical pain of what just occurred — most girls don’t even know what sex is at this age — she rallies and runs to hide in the bathroom, where, to her horror she discovers blood in her panties. Some part of her acknowledges she’s been wounded. Injuries create blood. Throughout her entire childhood, any time she was injured she ran to Mom or Dad for comfort, for soothing, for understanding. This time it’s different. She doesn’t fully understand why she is injured or how it happened to this part of her body — the place that holds so much secrecy and mystery. She knows it was wrong. But the threat from the big, strong, overwhelming man who her parents trusted makes it seem that she did something wrong. That she caused this to happen. The seed of shame and self-blame has been sown. Her ability to trust herself or others successfully annihilated.

Her autonomic nervous system’s response, her body having physically been unable to escape the ‘threat’ by fighting back or fleeing, as he had her deftly pinned to the floor with one strong arm— clearly an impossible task with a predatory man twice her height and three times her size — her system subsequently became overwhelmed and tipped into the ‘freeze’ state, or what is known as ‘tonic immobility’ also called thanatosis in the animal world; the ability to fake death in order to evade a predator or any other unwelcome intrusion. This incredible innate survival strategy does just that, it helps us survive situations where it feels like we are going to die; overwhelmed by a perpetrator who is causing us severe pain. Yet, once we’ve survived, the nervous system remains in this mode causing us to feel stuck. Hopeless. Helpless. Numb. Locked in. Powerless. Paralysed.

This ‘state’ is one that perpetrators can count on. The paralysis that arises during the act of abuse continues, quickly evolving into silence. It’s not just the perpetual state of ‘freeze’ that the system remains in, but the deep embedded fear of blame and shame at not having been able to escape, together with the retribution we believe we’ll endure for our apparent wrongdoing. The terror of what our parents will say, the painful punishment that will be administered — knowing we don’t have the capacity to endure any more pain. Silence is a better, safer option. Then we can avoid the loss of face in community, at school or within a friend group — remember how conscious you were of your friends opinions at this age? Not to mention the fact that kids aren’t educated in ‘what to do if your teacher or Daddy’s golf buddy fondles you or dips his wick in your foo-foo,’ they aren’t about to Google ‘sexual assault resources’ or dial up 911 and call on Percy Policman to come arrest the Putrid Perpetrator.

And so, most suffer on. For many the memory of assault is locked away in the amygdala – the reptilian part of our brain responsible for emotions, particularly fear, our developing Neo-cortex incapable of processing the overwhelming trauma at such young age. For others, the event continues, re-wiring our bodies and brains until the PTSD symptoms begin to appear; often 20 or 30 years on. Wondering why for the majority of our lives anxiety, fear and depression have been our primary modes of being, which we’ve often suppressed quite successfully with substances, drugs, shopping, even yoga.

Then one day, an Orange headed baboon opens his babbling mouth and dares to question a woman over her inability to report an incident of sexual assault that happened in her teens. And, all of a sudden, that ‘freeze’ evaporates, you feel the fire in your belly, the anger rise, the indignant disgust of the injustice of a society where the patriarchy is able to perpetuate this culture of denial, victim blaming and shaming so the silence is maintained. Then, deep inside you feel a shift. As I tell all my clients of sexual abuse, “The only way out is through” — what I mean by that is; the autonomic nervous system, in order to reset and return to a place of trust, relaxation and safety, must first go through the fight/flight response. This results in our system having to enter into the panic, anger, rage. Righteous rage at that. President Trump. You have no idea what you’ve unleashed. That, inadvertently you’ve just helped millions of silenced souls to rise-up. To feel their rage. To speak out. Let the waves of anger do what anger is made for. To create inspired action. To bring change to a world that desperately needs to find ways of preventing this from happening, to stop annihilating the trust of our children, and instead annihilate the shameful pro-rape culture and to truly give a voice to and trauma-informed support to those who’ve experienced assault and abuse, especially in their innocent, early years.

Gemini Adams, E-RYT, C-TREP – is a trauma specialist, yoga teacher and award-winning author who is passionate about unraveling the shadowy ‘stuff’ that sits behind our suffering to bring relief and restore an authentic state of well-being to mind, body, heart and soul.  A somatic therapist and advanced TRE® practitioner, she draws on 20 years of study in the healing arts. She is the creator of Womb * Sense — a fusion of yoga, sensual movement and somatic therapy — designed to help women heal from trauma and abuse, which she’s taught to thousands of women worldwide. She also works with the Center for Relational Healing in Los Angeles.