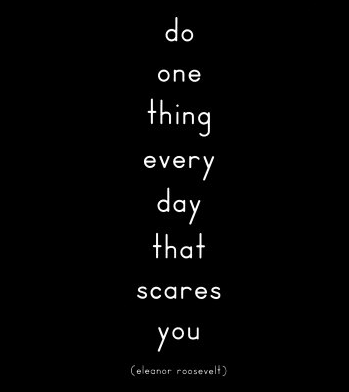 She was certainly our First Lady, traveling incessantly and serving as President Roosevelt’s eyes and legs.

What’s inspiring about her, as I remember it, was that she was only happy, only fulfilled when she was helping others. She needed to help others in order to be at peace. And so she worked non-stop for the poor, for African-Americans (at the time extremely marginalized) and for all those who were getting a tough break, one way or the other, during the 1930s and 40s. After her husband’s death, she went on to serve the world for another three decades. Recommended reading: No Ordinary Time, by Doris Kearns Goodwin, about her and FDR’s complicated, distant, yet warm and intellectually-rich relationship.

1. No one can make you feel inferior without your consent.
2. People grow through experience if they meet life honestly and courageously. This is how character is built.
3. You gain strength, courage and confidence by every experience in which you really stop to look fear in the face. You are able to say to yourself, ‘I have lived through this horror. I can take the next thing that comes along.’ You must do the thing you think you cannot do.
4. Do what you feel in your heart to be right – for you’ll be criticized anyway. You’ll be damned if you do, and damned if you don’t.
5. Friendship with oneself is all-important, because without it one cannot be friends with anyone else in the world.
6. Beautiful young people are accidents of nature, but beautiful old people are works of art.
7. I used to tell my husband that, if he could make me ‘understand’ something, it would be clear to all the other people in the country.
8. I’m so glad I never feel important, it does complicate life!
9. Since you get more joy out of giving joy to others, you should put a good deal of thought into the happiness that you are able to give.
10. We are afraid to care too much, for fear that the other person does not care at all.

Excerpt via Doris Kearns Goodwin’s article re: Eleanor in TIME’s 100 most influential people of the 21st century:

When Eleanor Roosevelt journeyed to New York City a week after her husband’s funeral in April 1945, a cluster of reporters were waiting at the door of her Washington Square apartment. “The story is over,” she said simply, assuming that her words and opinions would no longer be of interest once her husband was dead and she was no longer First Lady. She could not have been more mistaken. As the years have passed, Eleanor Roosevelt’s influence and stature have continued to grow. Today she remains a powerful inspiration to leaders in both the civil rights and women’s movements.

Eleanor shattered the ceremonial mold in which the role of the First Lady had traditionally been fashioned, and reshaped it around her own skills and her deep commitment to social reform. She gave a voice to people who did not have access to power. She was the first woman to speak in front of a national convention, to write a syndicated column, to earn money as a lecturer, to be a radio commentator and to hold regular press conferences.

The path to this unique position of power had not been easy. The only daughter of an alcoholic father and a beautiful but aloof mother who was openly disappointed by Eleanor’s lack of a pretty face, Eleanor was plagued by insecurity and shyness. An early marriage to her handsome fifth cousin once removed, Franklin Roosevelt, increased her insecurity and took away her one source of confidence: her work in a New York City settlement house. “For 10 years, I was always just getting over having a baby or about to have another…

…But 13 years after her marriage, and after bearing six children, Eleanor resumed the search for her identity. The voyage began with a shock: the discovery in 1918 of love letters revealing that Franklin was involved with Lucy Mercer. “The bottom dropped out of my own particular world,” she later said. “I faced myself, my surroundings, my world, honestly for the first time.” There was talk of divorce, but when Franklin promised never to see Lucy again, the marriage continued. For Eleanor a new path had opened, a possibility of standing apart from Franklin. No longer would she define herself solely in terms of his wants and needs. A new relationship was forged, on terms wholly different from the old.

She turned her energies to a variety of reformist organizations, joining a circle of postsuffrage feminists dedicated to the abolition of child labor, the establishment of a minimum wage and the passage of legislation to protect workers. In the process she discovered that she had talents–for public speaking, for organizing, for articulating social problems. She formed an extraordinary constellation of lifelong female friends, who helped to assuage an enduring sense of loneliness. When Franklin was paralyzed by polio in 1921, her political activism became an even more vital force. She became Franklin’s “eyes and ears,” traveling the country gathering the grass-roots knowledge he needed to understand the people he governed.

They made an exceptional team. She was more earnest, less devious, less patient, less fun, more uncompromisingly moral; he possessed the more trustworthy political talent, the more finely tuned sense of timing, the better feel for the citizenry, the smarter understanding of how to get things done. But they were linked by indissoluble bonds. Together they mobilized the American people to effect enduring changes in the political and social landscape of the nation.

Nowhere was Eleanor’s influence greater than in civil rights. In her travels around the country, she developed a sophisticated understanding of race relations. When she first began inspecting New Deal programs in the South, she was stunned to find that blacks were being systematically discriminated against at every turn. Citing statistics to back up her story, she would interrupt her husband at any time, barging into his cocktail hour when he wanted only to relax, cross-examining him at dinner, handing him memos to read late at night. But her confrontational style compelled him to sign a series of Executive Orders barring discrimination in the administration of various New Deal projects. From that point on, African Americans’ share in the New Deal work projects expanded, and Eleanor’s independent legacy began to grow.

She understood, for instance, the importance of symbolism in fighting discrimination. In 1938, while attending the Southern Conference for Human Welfare in Birmingham, Ala., she refused to abide by a segregation ordinance that required her to sit in the white section of the auditorium, apart from her black friends. The following year, she publicly resigned from the Daughters of the American Revolution after it barred the black singer Marian Anderson from its auditorium.

During World War II, Eleanor remained an uncompromising voice on civil rights, insisting that America could not fight racism abroad while tolerating it at home. Progress was slow, but her continuing intervention led to broadened opportunities for blacks in the factories and shipyards at home and in the armed forces overseas. Eleanor’s positions on civil rights were far in advance of her time: 10 years before the Supreme Court rejected the “separate but equal” doctrine, Eleanor argued that equal facilities were not enough: “The basic fact of segregation, which warps and twists the lives of our Negro population, [is] itself discriminatory.”

There were other warps and twists that caught her eye. Long before the contemporary women’s movement provided ideological arguments for women’s rights, Eleanor instinctively challenged institutions that failed to provide equal opportunity for women. As First Lady, she held more than 300 press conferences that she cleverly restricted to women journalists, knowing that news organizations all over the country would be forced to hire their first female reporter in order to have access to the First Lady.

Through her speeches and her columns, she provided a powerful voice in the campaign to recruit women workers to the factories during the war. “If I were of debutante age, I would go into a factory, where I could learn a skill and be useful,” Eleanor told young women, cautioning them against marrying too hastily before they had a chance to expand their horizons. She was instrumental in securing the first government funds ever allotted for the building of child-care centers. And when women workers were unceremoniously fired as the war came to an end, she fought to stem the tide. She argued on principle that everyone who wanted to work had a right to be productive, and she railed against the closing of the child-care centers as a shortsighted response to a fundamental social need. What the women workers needed, she said, was the courage to ask for their rights with a loud voice.

For her own part, she never let the intense criticism that she encountered silence her. “If I … worried about mudslinging, I would have been dead long ago.” Yet she insisted that she was not a feminist. She did not believe, she maintained, that “women should be judged, when it comes to appointing them or electing them, purely because they are women.” She wanted to see the country “get away from considering a man or woman from the point of view of religion, color or sex.” But the story of her life–her insistence on her right to an identity of her own apart from her husband and her family, her constant struggle against depression and insecurity, her ability to turn her vulnerabilities into strengths–provides an enduring example of a feminist who transcended the dictates of her times to become one of the century’s most powerful and effective advocates for social justice. …for the rest, click here.