Letter From a Veteran: I Didn’t “Serve” Our Country, So Please Stop Thanking Me. 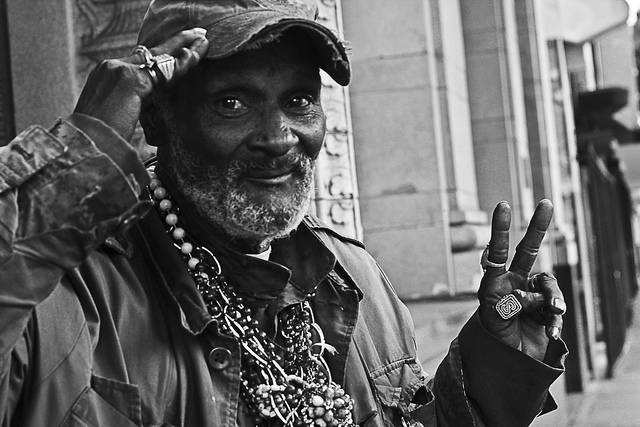 Each Veterans Day, Americans commemorate the men and women who have “served” the country in the military.

In the strictest sense of the term, I’m one of those men: I’ve just passed the 30th anniversary of my discharge from six years of Navy “service.”

I know that those who express gratitude for this mean well. I want to respect that.

But I can no longer remain silent while people heap platitudes of gratitude upon me for something that I did not do.

I could probably continue to ignore it, except that people have begun to explicitly thank me, by name, for “serving our country.”

I did no such thing.

Yes, I enlisted and “served” in the US Navy—but it was entirely self-serving.

There was no noble motivation, no dedication to the country.

I was stuck in a rut, in a small town with limited opportunities. I had a drug addiction and had no resources for breaking it. I had to get out of town, to save myself. But I had no money, and no prospects of getting enough to get away. The Navy offered me a ticket out of there, as well as an education that promised to set me up for the future.

I was reluctant to enlist. I was a long haired dope smoking poster child of the “me” generation. I didn’t want to be subjected to military discipline. I certainly didn’t want to get a haircut, wear a uniform or keep my shoes shined.

But I was desperate to get out of Nowhere-ville, Georgia. I was desperate for some intellectual and cultural stimulation. And I naively thought that if I got away from my peer group I could finally kick the dope.

So I signed up.

As Meatloaf says: “two out of three ain’t bad.”

Twenty-four hours later I was in San Diego—almost as far from Georgia as you can get. Soon I was being stimulated in grand and unexpected ways.

But I didn’t get away from my peer group. I discovered that they’re everywhere. In 1979, the dope in California was much better than what we could get in Georgia. In 1980 I learned that the dope in Hawaii, the Philippines and Thailand was better still.

We partied hard, all over the world—on Uncle Sam’s dime.

You probably think that at least we dried out a bit at sea; but you’d be wrong.

Watching the sunrise over the Golden Gate Bridge, hanging off the guard rails of an aircraft carrier as we entered San Francisco Bay hallucinating on LSD was awesome. Running the length of the ship responding to a fire alarm high on cocaine was a blast.

Snorting speed on the mid-night watch was merely getting by.

I could go on like that, but you get the picture. That’s how I “served my country.”

Most of my shipmates came from small towns, or from tough working class neighbourhoods in the cities. Some had been laid-off from factory work due to the recession. Others had finished school with few opportunities. Sure, they all professed patriotism; but none were keen to die for it. They were all running away from hard times, or searching for a way towards a brighter future.

We were serving ourselves, not our country.

In fact, except in times of national emergency, the enlisted ranks of the US military are generally made up of young people from the most disadvantaged ranks of the working and middle-classes. Even in times of prolonged warfare, most fighting men and women are drawn from the lower socio-economic groups—people with no interest in going to war, but with limited opportunities in civilian life. (1)

This is why conscription was necessary during WWII and Vietnam. Without conscription, the two Gulf Wars required reservists and National Guards to be “called up” to active duty—something they certainly did not sign up for. So, thank them for their service, by all means—but don’t treat it as if it was some self-less or noble act.

In the wake of 9/11, as the War on Terror was ramping up, there was an upsurge of young people volunteering to join up. I mean them no disrespect—but for the most part, we’re talking about very young and naive men and women who were fed a steady stream of patriotic ideology throughout their schooling.

They were taught unquestioning loyalty to the idea of America. They were certainly not taught to critically engage with the reality that is America, or to think about the huge gap between the United States of reality and the ideals that the United States espouses.

They obediently marched into Iraq on a mission to seek and destroy mythological weapons of mass destruction.

In reality, the only “good” that came from removing the dictator Saddam Hussein was to the bottom line of arms dealers and government contractors; corporations owned by the puppet-masters who also owned the President.

It has been a long time since any soldier or sailor has been called upon to actually “serve” the United States. Since peace was declared in the Pacific Theatre at the end of WWII, the service that the US military has provided has been almost exclusively to corporate America—ensuring that foreign markets and resources are open to US corporate exploitation.

I was one of those millions of naive young people who enlisted unaware of this cold hard fact. I don’t take pride in having served, and cringe when I am named in effusive statements of commemoration on Memorial Day and Veterans Day.

The only thing achieved by this rah rah rah about military service is to continue to glorify a most inglorious business: to continue to romanticize people who willingly sign-up for largely selfish reasons and find themselves unwittingly used as puppets of the most vicious form of capitalism.

Save your platitudes and express your gratitude by electing genuine peace-makers to public office. Elect people who are committed to ensuring that the military is only used to protect the people and territory of the United States—not the property and profits of corporate interests.

Elect people who are committed to thanking veterans with properly funded health and repatriation programs—ensuring that no veterans are left homeless, or needing adequate treatment for their “service.”

Express your gratitude by condemning aggressive war-mongering for corporate profits; condemn petty politicians posing as national heroes while hiding the fact that they are self-serving puppets of private profiteers.

Platitudes serve only to perpetuate the status quo, continuing a now well-established American tradition of consuming and destroying young lives, made palatable by calling them heroes.

(1) The results of a google search for US Military Demographics begins with a number of references to a 2008 study by the Heritage Foundation that claims to have disproved this “conventional wisdom”. The Heritage Foundation is an ideological “think tank” with a vested interest in perpetuating the cult of the military hero. A more credible source is ‘Who Joins the Military?’ by Amy Lutz from Syracuse University, which confirms my claims here.

Dead Veterans Aren’t the Only Ones Who Need to Be Remembered.

The War Inside: Veterans & Suicide.