Depression: 6 Small Ways to Battle Back. 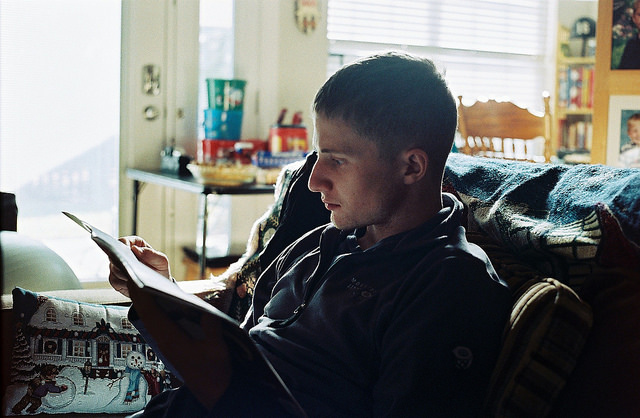 Depression sucks. It literally sucks the life out of us.

And to fight it, we have to become warriors. We need to carry shields and swords, and throwing stars, and that chain with the spiked ball hanging off it. Whatever that’s called, we have to carry that.

Anyone who suffers from depression (to any degree) will tell you that the things people offer as remedies for combating it are said mainly to try to give us hope and a plan of action. We know they want to help, and they are sincere in their caring, but they just don’t understand.

Depression keeps us indoors, in our beds, on our couches, away from the world.

It’s like waking up with a brick wall in front of our faces, or lugging around an anvil and resting it on our laps whenever we sit down. Seemingly, it has the ability to grow roots and plant itself inside us. And if we don’t constantly rip that sh*t out when it’s beginning to take hold, it only grows bigger.

When I was a child, I had a traumatic experience that changed my life and affected how I learned to cope with my feelings. It gave me confusion, self-loathing, and an open invitation to addiction. It took away my voice, my confidence, and my little girl innocence. I was left without my inner self, the part of a person that absorbs and deals with life’s complicated offerings.

Would I have experienced addiction and its fraternal twin, depression, without my added history? Probably, since they are both afflictions that run rampant in my family. I could certainly blame my eating disorder on my depression, and vice versa, but either way, it was a sh*tty, vicious, inevitable cycle. A cycle survives when the origin of the circumstances becomes blurred.

In recent years, I’ve had some success battling my depression. These days, I’m able to keep the cycle from scribbling a black cloud over my life, but it’s a fight. In addition to initially tackling depression head on (professional therapy and medication), there are a few other things I do to actively battle back. These ideas indeed require a mind-over-matter philosophy (that no one with depression ever wants to hear), but they work if given the chance.

I’m sharing these ideas because they help me. It’s as simple as that.

I dealt with the ups and downs of life by abusing food. I repeatedly gained and lost weight. The binge eating and fasting subsequently triggered deeper depression. I often felt hopeless and helpless in my failure to get a grip on my eating disorder.

When I subscribed to a different food philosophy, things changed. I eat six small meals a day before 6:00 p.m. and I cut my alcohol consumption, as it tends to work as a trigger. Keeping things simple with my food plan—and sticking with it—helps lift the fog I often lethargically carry around. Without weight goals and dieting gimmicks, I nourish my body instead. I must do this each day in order to break the cycle of my bulimic episodes, and it creates positive feelings. As a result, I’ve lost “real” weight and have managed to keep it off.

I fully understand that I can be just as depressed sitting in the sun as I can be sitting inside my house. A funny thing happens when I go outside more: The air and sun hit my face and my senses became engaged. Something this simple changes my brain chemistry, while helping me glean some much-needed energy from something as small and simple as light.

The last thing I ever want to do when I’m feeling a bout of depression is talk to other people, and yet forced socializing becomes a great tool for my daily battle. I know that loneliness feeds itself, and is a big part of the depression/addiction equation. I agree to social gatherings with the understanding that I can leave at any time. Knowing this helps me get out the door. More often than not, the conversations and connections with people I make feed and stimulate my brain juices.

I take long walks, but I don’t call them exercise. The goal is not about calorie burning, it is to move my legs and get oxygen into to my body. Simply walking around my neighborhood gives me a sense of well-being. Short walks are good too!

Specifically, the practice of voluntary laughing via “Laughter Yoga” gives me the same physiological and psychological advantages of spontaneous laughter. This particular yoga experience focuses on breath and expelling negative feelings. All forms of yoga and its many soul-feeding, depression-fighting benefits, are wonderful weapons in the fight.

Crying at the movies, or being moved by a great book creates an inner shift. Good things happen when I physically release my emotions instead of bottling them up. As I express myself, my walls and weights erode. When I allow myself feel something outside of my own depression, it lightens my load.

Sometimes, combating depression is about not letting it grip us for too long. Scheduled eating helps me battle my eating disorder by throwing a wrench into the cycle. I know if I can get up to go to the bathroom, I can indeed walk outside, if only for a moment. Going to a party is infinitely easier when my inner contract allows me to leave at any time. I can release emotions not tied to my depression through laughter, a good book, or simply crying at the movies.

Depression is not something that simply goes away. It comes and goes in waves.

Battling depression is about following some rules, like getting to therapy and taking medication if it helps. But some of the rules require us to blindly fight back in the smallest of ways, every day. Walking, or getting to a yoga class can act like throwing stars. Something as simple as sitting outside in the sun instead of sitting inside on the couch helps me raise my sword to fight.