Do we even need another Reason to Adore Prime Minister Justin Trudeau? 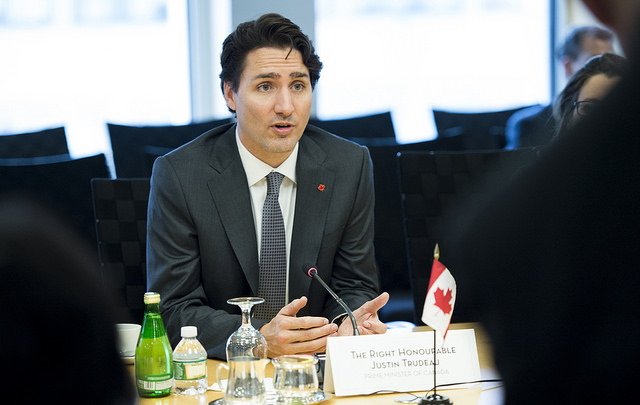 About a month ago, while crossing from the United States into Canada, two men lost almost all fingers to frostbite in their desperation to seek refugee status.

“Asylum seekers are illegally crossing from the US into Canada in growing numbers hoping to receive refugee status. One small prairie town in southern Manitoba has become the nexus point for migrants who have lost hope in the US.

Mohammed says he once viewed the US as a beacon for human rights and a place that welcomed newcomers but ‘when we came, we didn’t see that.'”

Where is our outrage?

Like most Americans, I am ashamed to admit that I’ve become jaded to the plight of refugees. We read about climate refugees fleeing water shortages and famines. We hear about Syrian refugees fleeing bombs and desolation. We see boats filled with children drowning on a weekly basis. Rarely does the latest tragedy pierce our comfortable bubbles and actually force us to stop and think about what is happening outside our families and our homes.

I was horrified—stomach in my mouth, tears streaming down my face—while watching the interview with these two men. Being from Alaska, I grew up with a healthy appreciation of the seriousness of frostbite. But that’s not why. This isn’t happening in Europe or the Mediterranean—this is happening here at home.

Instead of finding the “Land of the Free,” and rather than waiting to see what policy changes come next from the new administration, desperate immigrants are leaving the U.S. and walking across the sometimes frigid, snow-covered border into Canada.

Many of the undocumented immigrants entering the U.S. from Mexico are Central Americans fleeing from violence in their home countries. It’s an ongoing American delusion to think that we have a monopoly on freedom and democracy.

Although Canada has its share of immigration and refugee challenges, instead of fueling a climate hostile to immigrants like we are seeing in the U.S. today, Canada is stepping up and putting compassionate kindness into action. Not only is Canada’s Prime Minister Justin Trudeau a self-proclaimed feminist, he is personally and actively welcoming immigrants into our great, northern neighbor:

To those fleeing persecution, terror & war, Canadians will welcome you, regardless of your faith. Diversity is our strength #WelcomeToCanada

First, donate to a worthy organization. There are a lot of good people out there doing a lot of good work. Find a group that calls to you and consider a monthly contribution, even if it’s only a few dollars. One time donations are great, but sustainers keep the lights on from month-to-month.

Second, volunteer. Don’t have the cash to give? Donate your time. The best volunteers reach out and ask what an organization needs. Many need volunteers to help out in less sexy ways—like filing or stuffing envelopes or making phone calls. Set egos aside and get ready to be of service.

Third, walk your talk. Take a leaf out of Prime Minister Trudeau’s book and cultivate basic goodness. We can’t all house refugees or immigrants in our homes, but we all can treat others with respect. Holding U.S. citizenship shouldn’t be a litmus test to kindness. Let’s lift each other up and ensure no one else loses a finger to frostbite fleeing from the world’s richest country.

“Helping others is a question of being genuine and projecting that genuineness to others. This way of being doesn’t have to have a title or a name particularly. It is just being ultimately decent.”