7 Signs your Dreamy Yoga Teacher is a Horndog. 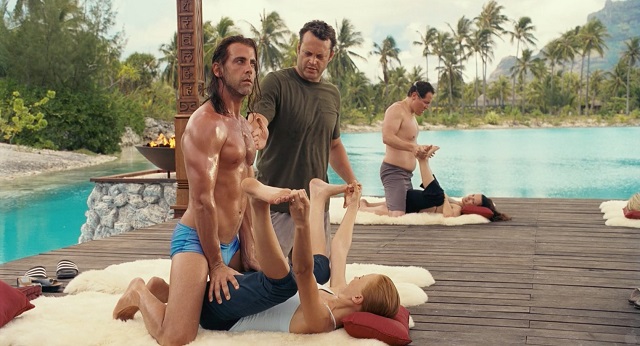 He is dreamy and delicious, with rock-hard abs, tanned pecs, and a tight butt.

Best of all, he is enlightened.

That dreamy yoga teacher works the room, occasionally stopping to make adjustments and provide encouragement as we struggle to hold Warrior III or fly up into Bird of Paradise.

His gentle reminders to reconnect with our breath and accept where we are at any given moment make him even hotter and dreamier. It is natural to crush on the yoga teacher in such circumstances.

But what if underneath his wise words and amazing adjustments lurks a horndog who uses his yoga cred to sleep around?

Here are some signs:

1. He always wears tight leggings or gauzy, sheer pants that show off his package.

My favorite are those sheer, white, wide-legged yogi guru pants. These pants work most effectively in demonstrations of headstand or another inversion that makes his pants fall around his groin area, exposing his legs and accentuating that bulge.

One friend told me about this guru at a yoga retreat who would remain in headstand for hours with his erection prominently displayed, presumably practicing acceptance of his sexual arousal while his disciples and students tried not to look.

At least his flagrant display provides an excellent opportunity to practice one of the eight limbs of yoga, Pratyahara, or sense withdrawal—since not looking at his perfectly packaged erection is virtually impossible.

Sure, these pants provide optimum comfort and mobility, and accentuation of his package is inevitable, especially in inversions. But plenty of male yoga teachers wear similar garments and yet somehow do not reveal any tell-tale bulges. And sure, sometimes unintentional erections happen, no doubt creating distress and embarrassment for decent male yoga teachers who do not hit on their students.

The difference lies in the yoga teacher’s attitude. Does he strut around proudly anyway? If so, he’s a horndog. Add bonus horndog points if he is always shirtless.

2. He always goes to the back of the room during those long Downward Dog holds.

Downward Dog is one of those delicious foundational poses that holds our Vinyasa flows together. Yoga instructors sometimes prompt students to hold Down Dog for at least five breath cycles, especially after an intense Vinyasa sequence, usually involving some torturous combination of Crescent Warrior, Revolved Chair, Side Crow, and Standing Splits. Resting in Down Dog helps reestablish our connection to the breath and calm down out-of-control heart rates so we can maintain concentration and focus.

Unfortunately, sticking our tail bones upward and spinning our thighs inward provides a nice view of our privates for anyone who happens to be behind us. Add sweaty yoga leggings, and precious little is left to the imagination, providing the teacher with plenty of visual candy.

So be wary of that vibe but please, please, please do not become self-conscious about Downward Dog. As long as he is not being totally creepy, go ahead and rock that Down Dog, proudly practicing acceptance of what is in true yoga form.

3. He talks too much about women’s womb power.

Our wombs get lots of cultural traction as the source of human life and hence the ultimate power of women. Before we get too excited, let’s pause at the bottom of the exhale for a reality check. This power also saddles us with the ultimate responsibility of gestating, birthing, potentially breastfeeding, and raising a child.

Even in modern America, we live in a patriarchal and puritanical culture that still tries to restrict access to birth control and abortion. As long as our rights of reproductive choice and bodily autonomy remain in question, so will our power.

For all his flowery talk about women’s womb power, he is not the one who has to deal with the prospect of pregnancy and all its physical, emotional, and financial consequences. So don’t reward his flattery—save it for a more honest man who really gets it and respects women as people, not some mystical life source.

4. He invites you to play Shiva to his Shakti.

Shiva and Shakti are important Hindu deities that embody the male and female aspects of creative, divine energy. According to Tantric philosophy, Shiva represents unmanifested universal consciousness, while Shakti represents manifested consciousness as matter and all the physical objects in the universe. Shiva’s unmanifested and unchanging state means that he must experience himself through his union with Shakti, the feminine. And yes, this union is sexual—just take one look at any depiction of Shiva and Shakti in the throes of ecstasy.

This shameless use of Shiva and Shakti indicates his willingness to exploit important Hindu deities in his quest for sexual gratification. Instead, we can view the sexual union between Shiva and Shakti as a metaphor for the heightened consciousness we experience when we connect deeply to divine and creative energy.

5. He casually mentions his ability to preserve his chi during sex.

According to ancient Taoist and Tantric philosophies, men lose chi, or life force, when they ejaculate during orgasm. Taoist and Tantric philosophies recommend that men practice self-control and prevent, or at least delay, ejaculation for as long as possible to preserve their chi. Delayed or nonexistent ejaculation during sex takes incredible self-control and discipline so any man who truly achieves this deserves some cred in my book. Such disciplined lovers are rare finds and worth experiencing for the mind-blowing sex.

But test-driving his self-control might result in a broken heart if he turns out to be a horndog. That delicious sex may come (no pun intended) with the price of having to share his prowess with other women. The fact that he even mentions his chi suggests that he seeks out opportunities to practice his self-control. In this case, practice definitely makes perfect. So beware.

6. Polyamory liberates him from sexual attachments.

Buddhism teaches that our attachments to things and people leads to suffering and we must let go of these attachments to cultivate greater happiness and well-being. In this regard, his polyamorous lifestyle works wonders as he easily shifts between various lovers. Gone is the guilt and hassle of cheating because all his lovers know his deal. Any jealousy or angst from his lovers simply indicate a lack of spiritual maturity and true understanding on their part.

But his polyamory does not enlighten him spiritually as much as it validates his need for sexual variety in true horndog fashion. So when he suggests hooking up to help liberate you from sexual attachments, ask him about Brahmacharya, one of the Yamas in the first limb of yoga that guides ethical behavior toward others. Brahmacharya, or celibacy, prevents those sexual attachments from forming in the first place.

7. He offers you free, private Tantra sessions to release trapped energy in your root chakra.

Actually, our sexual and emotional energy lies in the second, not the first, or root chakra. This discrepancy between the chakra he claims he can release and the sexual chakra gives him the pass to make his move since, technically, he is not referring to the sexual chakra. But the physical location of the root chakra makes it fairly certain that his techniques to release that “trapped energy” includes some sort of sexual activity.

Be wary if he notes your extreme discomfort in Full Splits or any hip openers as most of us lack flexibility and openness in those areas. We probably all have trapped energy down there so skip the private Tantra lesson unless casual and interesting sex is on your agenda.

Chances are, your dreamy yoga teacher is a horndog, mostly because what makes him so dreamy also makes it easy for him to attract women. But that does not mean giving up his class entirely (if he otherwise leads a rocking Vinyasa flow that results in a blissful Savasana).

As long as he does not cross any boundaries, a horndog yoga teacher can still be a good teacher. He may even guide us to deeper awareness and well-being. And harmless flirting is always fun, even if it does not lead to spiritual enlightenment.
~ 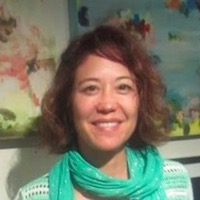