How Modern Witches are Tested in Everyday Life. 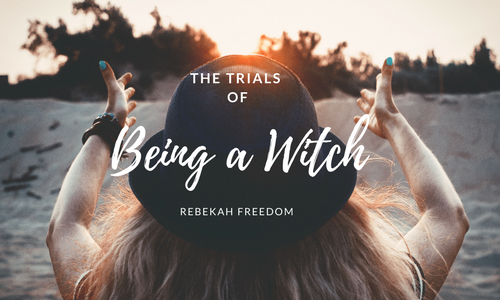 In each definitive moment of our lives, there comes an awareness so big that we can never unknow it.

For me, this moment came in a therapy session where I was lamenting my most current breakup. As we dug deeper into why I chose to be with that person—who was clearly not ready for me—in a burst, I said, “It’s because I’m a witch.”

These words slipped out of my mouth and as I heard them, everything began to coalesce in my life. I’d never really fit in at the Christian school I went to, with the men I’ve dated, in the jobs I’ve had, and so on. Suffice it to say, the early years of trying to fit in resulted in my ability to act as a shape-shifter.

In high school, I was called a “witch” and “gay.” I was the weird, lanky girl. And I defended against those labels because I wanted to fit in. I’ve suffered, as many women have, because the identity of being a witch still conjures up images of black magic, fear, and criticism. As we know, witches were persecuted throughout history.

But, what of the modern world? There are still trials that come with being a witch.

The first trial is coming to understand your place in the world.

Of course, this is a common theme for men and women alike. But, specific to being a witch, it means owning that you have a certain skill-set or gift of magic. Many of us experience this magic as anxiety, depression, or attention deficit disorder. It’s as if the potent energy inside of us is seeking an exact outlet.

But, so often, we try to hide it for fear of being banished—rather than turn to nature, to magic, and to the cycles of the moon to express our true power. Some of us siphon it into the healing arts, but without claiming the title of witch, our personal potency remains sequestered.

The second trial of being a witch comes from the associations behind the word.

We have sanitized the language around witches. We call it “manifestation” now. But the modern witches of the world are more than potions and spells. We are more than myopic healers. As so beautifully described in her book Witch: Unleashed. Untamed. Unapologetic., Lisa Lister tells us what a witch is:

“A witch is an unapologetic woman.

She alchemizes experiences and emotions.
She’s a woman with power, agency, and sovereignty…and she has it on her terms.
She creates and manifests.
She is self-sourced.
She freely communes with Nature/Spirit/God…
Being a witch is being a woman in her power.” (pp 7)

The third trial of being a witch is that even with our parent’s revolution, it’s still a pussy-grabbing man’s world.

The women’s march on January 21, 2017, the #metoo movement, which was reignited on October 15, 2017, and the continued efforts of women’s rights activists may be shifting the tide, but as tides do, they ebb and flow.

The fourth trial of being a witch is that it’s hard to know: “Where my witches at?”

I’ve lived in communities with hundreds of massage therapists, energy healers, “shamans,” psychologists, and psychics. But, the women in these groups rarely identify as witches. Yet, on a daily basis, they are casting spells with essential oils, gratitude journals, invocations written as intentions, and various other forms of magic. So, what would it take for more of us to come out of the broom closet?

The fifth trial of being a witch is the right of passage needed to hone our skills and claim our space as a woman in her power.

We suffer because we feel everything.

We suffer the heartbreak of ourselves and our lovers. We feel the collective torment of mother earth. We tune in so much that sometimes, we have to tune out. Being an empath is just scratching the surface of being a witch because many of us are tuned in to not just this dimension of existence but the unseen worlds as well. This type of knowing scares people at times, fascinates others, and is often misunderstood as entertainment.

The sixth trial of being a witch is not knowing you are one.

The feeling that you are a misfit, an outcast, and a lone-wolf can seem like one’s lot in life. And it has felt like mine. Men have only come to use me for my magic and broken my heart. I’ve been a practicing Christian, yet I’ve always found it odd how a whole faction of individuals believe in Jesus—the original zombie—and at the same time can be so closed off to magic.

But, once you see through the secrets and begin to own that no other title out there quite fits like that of a witch—the trials make you born again!

The next thing to do is walk the path. As a witch, you will use prayer, spells, and sage advice in equal parts. There are several paths and methods one can practice and still be a witch. A warning: it is easy to be seduced by dark magic, mind-altering substances that are masked as spiritual experiences, and promises of power. The essence of living as a witch is to be embodied, to fully inhabit every inch of our lives, and to communicate with integrity.

And as Lisa Lister says, “It’s not that you become a witch, it’s that you remember that you are one.” So, I invite the women of the world to remember, to claim your space, and to be set free from the trials as we band together one coven at a time.