Want to Really Change the World? Try Doing it like the Buddha.

I’m the last person you might expect to talk about activism.

In an age where being super busy is a badge of honor and accomplishing tasks the greatest virtue, where some activists promote rallies by quoting Martin Luther King saying, ”For evil to succeed, all it needs is for good people to do nothing,” I did the unthinkable. I dropped out.

First, I dropped out of the peace movement.

I had a job at a peace organization and my boss was a brilliant, charismatic leader who often gave us pep talks about “the fight for peace.” And it was a fight—against anyone who supported the war, against other peace groups over tactics, and against the media who didn’t cover our rallies accurately. I didn’t like fighting, and I was getting depressed.

One day it dawned on me: if I wanted peace, I had to stop making enemies. So I quit.

Ending the war inside became my first priority. I let go of career ambitions and lived simply so I could devote myself to inner work and meditation practice. But it was hard to give it my full attention when I was embedded in busy, distracted, expensive America, so I dropped out again. This time, out of the culture.

I became a nomad, wandering the world to find inspiration from ancient wisdom traditions and living among people who weren’t yet under the spell of consumer culture. Not that I didn’t like some of what it created. But I didn’t want a beautiful eco-house, organic yoga pants, and $6 lattes nearly as much as I wanted to end the suffering of the world.

I’m in good company. The Buddha dropped out, too. He was the original hippie.

The Buddha was a prince who had it all: power, prestige, money, sensual pleasure, but all of these coveted things of the world seemed insignificant when he finally faced the reality of suffering, death, and impermanence. So he threw away his fabulous clothes and wandered off into the forest in search of deeper meaning.

I’m sure there were those in his kingdom who judged him, who thought his dropping out was selfish. Couldn’t he do more good as a king than as a wandering yogi? What a waste. But the Buddha was looking for something more radical than helping the people in his kingdom achieve temporary prosperity. Like me, he wanted to end suffering.

So he dropped out and wandered. He tried all kinds of things to discover the truth. He was so passionate in his search, he even tried extreme austerities, fasting until he was skeletal, hoping it would push him to realization. Finally, when he was nearly starved and delirious, a milkmaid came by and said the obvious: “You’re making yourself sick. Have some porridge.”

I wonder if the milkmaid knew that her simple offer of comfort food provided the means to the Buddha’s key insight. Maybe she promptly forgot about it—just did a little kindness for a stranger, then went back to her cows.

I don’t think she gets enough credit. If the milkmaid hadn’t stood firmly in her perspective and offered her humble truth, then the Buddha, in his dogged pursuit of the highest truth, might have ended up just another strung-out hippie, dead from his excesses.

But lucky for us, the Buddha had some self-doubt. He listened deeply when she spoke, open to the possibility that she might know something he didn’t. And then he ate the porridge. In doing so, he had a deep insight on which he based his philosophy of The Middle Way: it doesn’t help to go to extremes. Better to cultivate balance.

It’s taken a lot of time and dedication to move through the layers of numbness and conditioning, fear, and delusion in my psyche, and I’ve had many insights along the way. But I didn’t have a profound, world-changing realization come to me in only six years of practice as the Buddha did, and it sometimes makes me uneasy.

Is that uneasiness just my ego, wanting to make a big splash instead of following the truth of what is mine to do? On the other hand, I’ve been at this for a long time. Is it really helping the world? Am I kidding myself?

I don’t enjoy self-doubt, but I think it’s probably a good thing because it keeps the inquiry alive: I know that I might be wrong. That alone is an achievement, considering how convinced I used to be that my perspective was always morally right and the most true.

My practice has gone far enough that I don’t believe anymore that I have all the answers as to how the world ought to change and what everyone else needs to do to change it. And I don’t often think others as enemies, because I’m far less ruled by hope and fear. But I haven’t yet landed in a presence stable enough that I can always trust myself to act from wisdom.

Maybe this instability isn’t such a bad thing. After all, it keeps me humble, because whether I’m directing my attention inside or outside, even with the best of intentions, I can’t know for sure if what I’m doing will help.

In fact, I’m pretty sure that deep down, none of us really knows if what we are doing will ultimately help or hurt. Can we admit that and still do our best with what we have? Not be so convinced that our view is the whole truth and those who disagree are our enemies?

I wonder if world-changing transformation comes from listening for truth from sources that our ego would easily dismiss, and this receptivity requires just the right amount of self-doubt. Not enough to knock us off our seat, but enough to listen to others deeply, willing to be changed.

Maybe this deep listening is the real activism, whether we’re marching in the street or sitting under a bodhi tree. 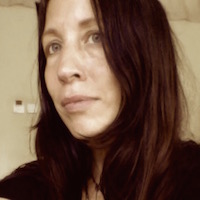