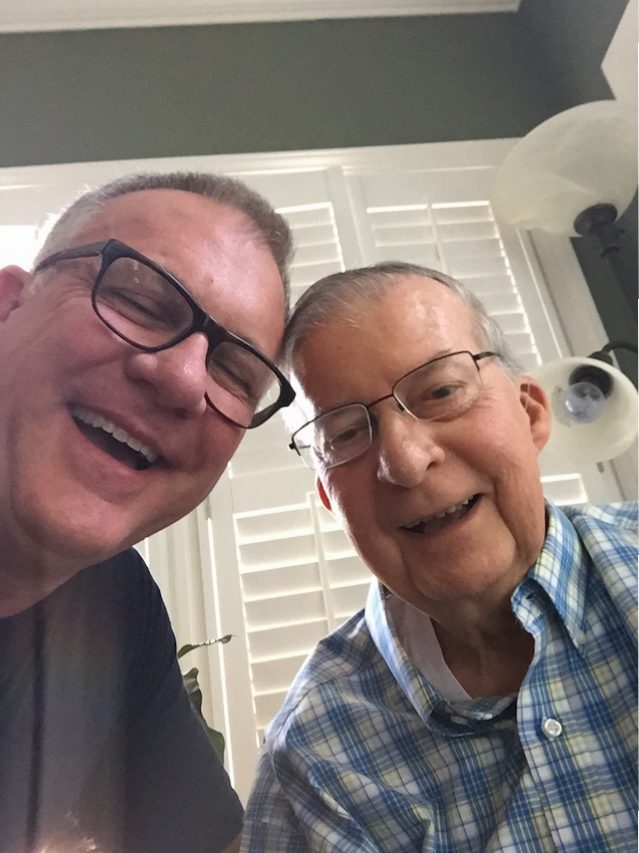 My Dad, now 84 years old, often tells people who claim to be getting old, “Everyone has to grow older, but nobody has to get old.”

He’s always been a man full of knowledge and wisdom. He taught me all the essentials, like plumbing, for instance: hot’s on the left, cold’s on the right, and water runs downhill. He taught me to take my foot off the accelerator when the stoplight turns yellow to save fuel and go easy on the brakes. He taught me the value of making to-do lists, which I now see as a mindful practice allowing me to prioritize what’s truly important, rather than what just seems urgent at the time.

Most importantly, he taught me that my attitude is everything when facing a challenge.

The connection between my dad’s philosophy of aging and attitude has never been more meaningful to me than in the past few months. Last fall, I suffered a debilitating injury that has taken several months for me to recover from. I admit, remaining mindful through the pain of recovery has been especially difficult for me. It’s hard to maintain the right mindset, to remain in the middle of the stream—neither pushing ourselves unreasonably to recover nor letting ourselves cave into despair—when we’re struggling with pain.

Under normal circumstances, I don’t act my age when it comes to the gym, mountain biking, hiking, and running. Going for months without lifting anything heavier than a milk jug meant I had to face an unsettling possibility: old “Warrior Jim” might become little more than some old photos posted on social media. I didn’t like that, not one damn bit.

For several months, I hardly recognized the grave face racked with pain I saw every time I looked in the mirror. A simple walk around the block was all I could muster, and I was hobbling around like an old man. At least, that’s how it felt.

In Steven King’s series, “The Dark Tower,” Roland (the Gunslinger) often said to his companions, “remember the face of your father”, as a way of encouraging them to live honorably, fearlessly, and resiliently.

Throughout the first eight weeks of my recovery, as I plodded down the sidewalk, I would try to remember my father’s voice rather than his face. I would repeat to myself, no one has to get old as if it were a mantra and remind myself, attitude is everything when I feared I might never fully recover.

To my father, aging and pain are to be met like all trials: with attention to our state of mind. Pain either refines us or ruins us. If we want it to refine us, then it’s useful to recognize some simple, albeit difficult, truths.

First of all, we are all going to experience pain. Whether emotionally or physically, it’s inevitable. Confronting that truth—that we will age, and that we will be hurt—gives us power over it. Yes, there will be times of struggle and times when life seems unfair. But if we can actively acknowledge it, even meditate on what may come, I’m convinced we can better prepare for it.

Second, my dad was right: attitude is everything. Pay attention to the pain. Let it hurt. Acknowledge it instead of trying to deny it. But be mindful of how you respond to it. Recognize when your pain is running the show, whether it be physically or emotionally. Then tell it to hush. Over and over and over again, if necessary.

(Obviously, there are severe mental health issues that won’t be overcome by this. It’s important to recognize this too and have the courage to ask for help. There is absolutely no shame in that.)

Third, let go of the past. Part of my struggle to recover was my fear of no longer being who I was before, or at least who I thought I was. What if I couldn’t mountain bike anymore, or run, or go heavy in the gym? Who would I be? I was in pain, which I couldn’t control, but my suffering was optional. The only way I was going to stop suffering was to decide to let go of those fears and stop clinging to who I had been or thought I was supposed to be.

Finally, remember that all things are impermanent. Some things last longer than others. (Ramen noodles and those cream-filled snack cakes, for instance.) But nothing lasts forever. When we’re in pain, it’s easy to believe things will never get better, that we can’t go on, or that the healing process is too much. That suffering arises because we’ve left the moment and moved into the future. In short, we’re worrying about what might happen. By reminding ourselves things are impermanent, we can improve the present moment by envisioning an end to our pain.

As I finish writing this, I’ve just returned from the gym. You see? Things have changed. Sure, I’ve got some more work to do, and I’ve had to modify both my exercise routine and expectations for a while.