How I Learned to be a Man—from my Cat. 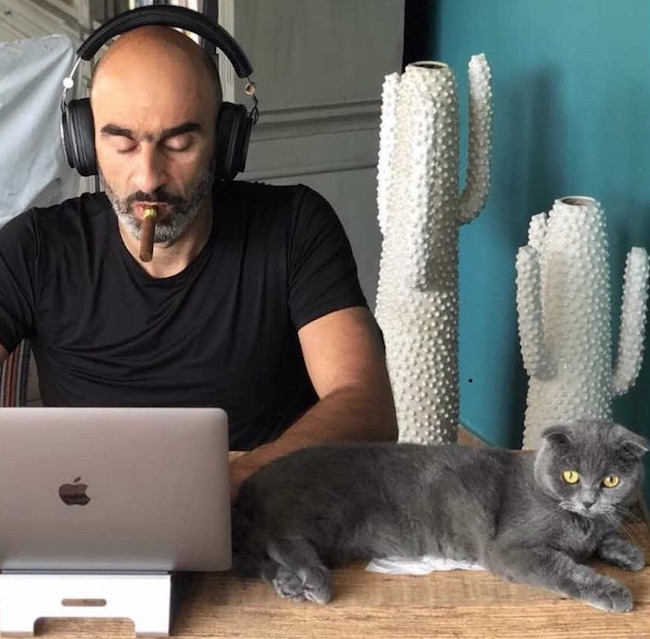 “Cats were put into the world to disprove the dogma that all things were created to serve man.” ~ Ernest Hemingway

This is a story about a cat.

My daughter wanted a cat. I said no. She pleaded. I still said no.

A few months later, my daughter called me. “Dad, do you remember the cat I wanted to get?”

“Well, she’s here at the airport, and customs won’t let her in.”

My daughter, being my daughter, had conspired with a good friend of our family to bring the cat into Ghana, from Ukraine via Lebanon, as a gift to her mother. I did what all good fathers would do and arranged the necessary.

The cat arrived home just a few hours before me and was comfortably curled up in a small corner of the corridor leading to my bedroom. My wife and daughter doted upon the cat as if she were a newborn baby.

“Isn’t she cute?” My daughter held it up to me.

The cat had large round eyes, a rounded head, soft cheeks, delicate whisker pads, and the most interestingly folded ears. Her fur was short and thick, coloured a silvery-grey that glistened in the light.

She was a Scottish Fold, and they had decided to call her Sassy. She looked ever-so-cute and she seemed so helpless.

I didn’t tell them how I felt. Instead, I kept up my stern demeanour and barked out orders: The cat is not allowed in my room. The cat will be locked up in the evening. The cat can’t do this or that.

Within a few days, Sassy broke every rule. For good measure, she also peed on my side of the bed.

I grew up in countries like Ghana and Lebanon, where there’s little time or respect for pets. Not so long before Sassy’s arrival, I made fun of men petting cats. I found it embarrassing that grown people could show such affection for animals.

But, a few months later, I was quietly warming to her. One afternoon, I came home early and Sassy immediately came running toward me. I bent down and started stroking her. She purred and wagged her tail, which filled me with joy and that surprised me.

At that exact moment, unbeknownst to me, a technician at my company was at my house fixing an internet issue. When our eyes met, I was so embarrassed.

I smiled. He smiled back. I could read his mind. Gotcha!

Then I started to think about my biases about men and cats. After all, Vito Corleone, the Mafia boss of bosses in “The Godfather,” had a cat. Winston Churchill had many cats. My all-time hero, Hemingway, had a soft spot for cats and had many in his several homes. I found out that some of my other favourite writers—Charles Bukowski, Mark Twain, Annie Dillard—also liked cats.

Perhaps Sassy caught me at a time when I was more emotionally open. That is, I was navigating the emptiness that I’ve faced since both my children left home for college. Or, maybe all the work I’ve done with vulnerability has helped me to become a more compassionate human being.

Whatever the case, Sassy has brought a lot of character, presence, and love into our home. She has become a blessing—rather than the annoyance I’d expected.

Sassy has already taught me many things. Here are the three biggest lessons so far:

Hemingway famously once said, “A cat has absolute emotional honesty: human beings, for one reason or another, may hide their feelings, but a cat does not.”

Cats are emotionally intelligent, and they get the big picture about life being transactional. I love the simplicity and honesty of that transaction. There is no need to go overboard like a dog and over-express. There is no please, no thank you, and no clinging. There is no pretence in anything they do.

Once, Sassy managed to get her front paw stuck in the material covering a chair. I heard her constant cries from two rooms away. I rushed to see what was happening. The poor kitten was utterly helpless. She was stuck and hanging from the chair. I quickly removed her and put her on the floor.

There was no gratitude, but rather a little growl at the situation. She then turned her back and walked away. “I was helpless, you helped me, and now I’m okay. No big deal,” she seemed to say.

Cats love their alone time. They are clear with boundaries. There’s a time to play, a time to eat, and definitely a time when it’s okay to hold them. But it’s always “me first,” and they are refreshingly unabashed about it. Cats are aloof, but they are so much less demanding because of it. They can spend hours alone gazing out a window, just observing life.

They, too, must have read Kahlil Gibran‘s quote: “Let there be spaces in your togetherness, And let the winds of the heavens dance between you. Love one another but make not a bond of love: Let it rather be a moving sea between the shores of your souls.”

However, cats are also loving and present in their way. Sassy glances and stares directly when our eyes meet. Every few hours or so she will come close and rub her body against my leg. She waits eagerly for us to return home.

A few winters ago, I was sick with a heavy flu and spent all my time in bed. Sassy never left my bedside, only going out for her necessities. It’s like she gets me. Space. Solitude. And always being there for the big things.

Cats (and animals in general) don’t think of yesterday or tomorrow. Only the now. Apart from their biological needs, cats follow their curiosity.

They have that ability to lose themselves in whatever they are doing, no matter how petty it is. It’s like they invented the concept of dolce far niente—brought to the world by Elizabeth Gilbert in Eat, Pray, Love—which translates to, “the sweetness of doing nothing.” It’s similar to Buddhist teachings that preach being present, not trying to strive for anything in order to get lost in the spontaneity of the moment.

Sassy once saw a bird outside. She got all excited and managed to get out and chase it until she hit a tree and fell over while the bird flew away. The kids and I laughed so much. A few weeks later, she did the same thing again, this time following a butterfly. Always curious, always following her curiosity—no matter the outcome.
There’s no doubt that Sassy has added a lot of love to the house. She has become a point of connection for all of us. My children’s first question when they call is always, “How’s Sassy?” And in my own life, I’ve become much more empathetic because of her presence.

Many will argue, probably correctly, that dogs make better companions than cats. However, Sassy not only changed my perception on pets, but has also consistently echoed the values I want in my life: emotional honesty, independence, self-love, and commitment to following our passion.

Get a cat today, and you’ll most likely be thanking me in six months’ time.