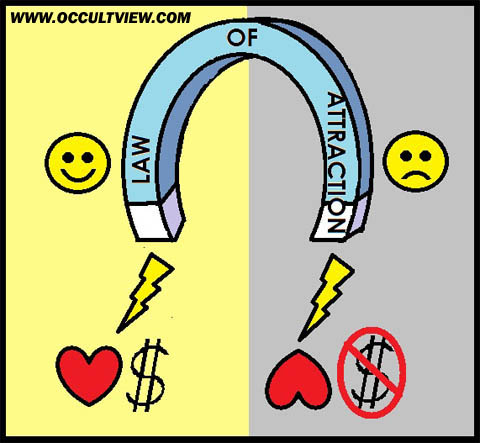 “When you want something, all the universe conspires in helping you to achieve it.” ~ Paulo Coelho

I watched “The Secret,” and as many millions of viewers did, I went back home and started to visualise what I wanted in my life.

And I didn’t want inner peace, love, or more compassion.

No, I wanted 10 million dollars in a small aluminium briefcase, which would solve all my company’s woes and set me up for a good life.

I visioned walking down the street and finding the briefcase resting on a sidewalk. I would simply carry it back home with me and live happily ever after. I practised this visualisation for 30 days straight.

I never did see the 10 million—or that silver briefcase.

Fast forward a few years. After reading a few classics—As a Man Thinketh, by James Allen, Napoleon Hill’s Think and Grow Rich, Ask and It’s Given, by Esther and Jerry Hicks—I began to better understand how the laws of the universe really work.

The Law of Attraction does work. However, we first need to understand the underlying law that governs the universe:

The Law of Vibration.

Everything is energy; it moves and vibrates. Everything that we can see—ourselves, the people around us, the chair we’re sitting on while reading this article, the tall oak tree outside our window, and the things we can’t see—tiny atoms, light, dust on the table, our thoughts, and others’ thoughts—vibrates at a specific frequency.

Only when we understand this first principle, can we then move on to the Law of Attraction.

What is the Law of Attraction?

For a practical spiritualist like me, the Law of Attraction is a useful framework for understanding the world, but it’s not a magic pill.

We must be passionate about our intentions.

What do we truly want, with every fibre of our body? Where are we constantly directing our thoughts? What does our heart weep for? The universe is like a jury—listening, watching, and waiting to be convinced by the evidence we place in front of it.

Have we shown clarity of intention? Have we demonstrated sufficient passion? Are we reaching for what we want? Or is our intention a mere hopeful thought.

In other words, a man is the sum total of his beliefs and convictions, which manifest themselves in the daily life he leads.

Why should the universe help me attract 10 million dollars when I haven’t truly demonstrated I want it? Five minutes of visualisation each day for 30 days is nothing compared to the hours of other thoughts that drew my focus during that time. I wasn’t emotionally invested in the idea, and I was indeed not doing enough to attract it.

We’ve got to have faith and let go.

Letting go doesn’t mean we have given up, but rather that we trust the universe. We’ve shown it what we want. In the end, however, it’s not up to us. Just as a defendant’s fate lies with the jury, our destiny is in the hands of the universe.

I know this sounds almost paradoxical to the self-reliance I often preach, but we need to understand that there are bigger forces at play. Our concept of time is constructed. Our minds, always seeking instant gratification, tend to believe that what we want must arrive today, or soon after. However, the universe moves at a different pace. If we trust it, it does deliver.

Deep inside, I never did believe that I would get the money. Though I did let go of the intention, I had no faith that the universe would deliver. My intention was just a hopeful wish, a stab in the dark.

Likewise, we can “tune” our thoughts, feelings, and actions. We can immerse ourselves in the vision we’re seeking. We have to adjust our environment so that our vision can flourish.

In 2016, I listened to nearly 200 podcasts by Tim Ferriss, author of The 4-Hour Workweek, within six months. I was then shocked to see him at a writing course I attended in Paris, but I shouldn’t have been so surprised. It was as if the universe conspired in my favour to reconstruct my reality, as I was fully immersed in my vision.

I have now moved on from my “new age” obsession and have become much more grounded in my beliefs. I fully trust in the power of the universe, but I also know that I’ve got to meet it halfway.

We all want a quick fix. We cling to movies like “The Secret” and people who promise us the Law of Attraction. However, the real law is the Law of Vibration.

The Law of Attraction is only the byproduct of understanding and working with the Law of Vibration.

Go vibrate your whole being—mind, heart, and soul—into what you seek. Only then will the Law of Attraction start working.