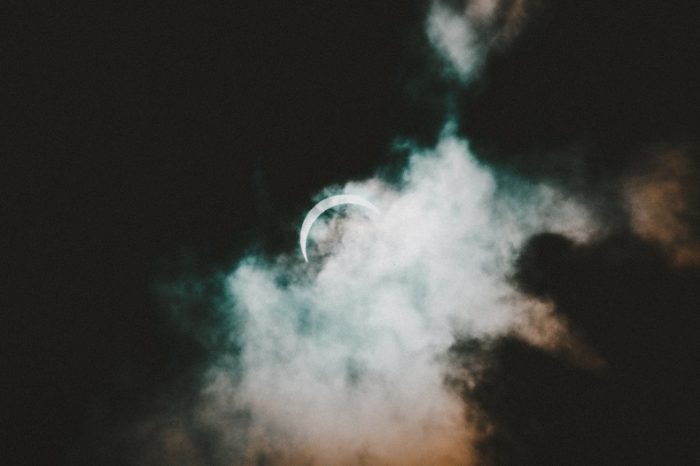 On July 12th/13th (depending on your location), the eclipse season begins with a new moon partial solar eclipse in the zodiac sign Cancer, marking the first of three eclipses in a row.

(This new moon is also a supermoon and is the closest and largest new moon of the year!)

The last eclipse from the previous season was on February 15th, 2018—so all that we have been through since that date is now accelerating to a close and will reach completion on the final eclipse of this season on August 11th. When this six-month period closes in August, we will notice major aspects of our lives clicking into place and making sense, and we will resolve many of the things that have been troubling us since the start of the year.

Eclipses affect each person differently depending on their birth charts, but overall, they are notorious for beginning and ending significant chapters of our lives—without prior warning. These seasons have a particular theme running through them and usually relate to emotions and relationships; they often involve those who are unhealthy for us disappearing (or being eclipsed) from our lives.

During this time we become aware that for some time certain things have been happening behind the scenes—and suddenly a light will shine, and people’s true characters will be revealed. By the time we are awakened to the undercurrent that has been heading our way, it is usually too late to do anything but go with the flow and have faith that the force is relocating us toward better places—or people.

Eclipse energy is similar to full moon energy, but is far more potent and disruptive, so we may feel triggered and find ourselves involved in futile arguments. We may also notice our energy—and that of people around us—feels charged and volatile, as though everyone seems extra irritable, edgy, emotional, anxious, fatigued, angry, or stressed.

We will likely notice our senses are on high alert, and everything feels and sounds louder, brighter, stronger, and more vivid than before, as the energy emanating from eclipses can feel both overwhelming and disorientating. Eclipses are catalysts that deliver immense and unexpected change. They are the “wild cards” of the cosmos, as we are often unprepared for the rapid and dramatic shifts they bring. They leave a powerful imprint, as they generate huge surges of emotional energy which heightens our intuition and compels us to question our core beliefs, thoughts, and feelings, which can then make or break our closest relationships.

This metamorphosis can be extremely challenging and even painful at times due to so many twists and turns in such a short space of time, so we may feel as though our lives are spinning out of control. It is nothing to fear though, as eclipses are nature’s way of awakening us and sweeping our past of anything that no longer serves us, so we have a clear and vast space to plant new seeds and grow into our future.

Eclipses are supercharged, cosmic pushes from the universe that shake us and force us to take action so we’ll pay attention to what is happening around us. They are renowned for being a turning point, as they reboot our lives, particularly in areas where we have procrastinated change and stayed in situations that are toxic, unfulfilling, or that simply make us feel miserable.

During an eclipse, we may find the urge to purge and cut free from anything that feels dysfunctional or that holds us back. We may feel drawn to end a relationship, make a career change, change our beliefs, make a major lifestyle decision, or move to a new city. It is likely we will also make drastic changes in our homes, as we purge belongings and rearrange our living spaces.

Issues we have consciously or subconsciously avoided will surface during an eclipse, which may be uncomfortable to face; however, they are essential for our personal growth, transformation, and soul evolution. Eclipses can feel destabilising, but that is mostly due to the closing of the six-month energy period, so everything feels as though it’s coming to a head at once.

Eclipse seasons are often turbulent, but are known to work in our favor, as an energetic force is guiding and supporting us through any difficulties we are presented with. They are beneficial teaching and healing periods—and although they can feel devastating as sections of our lives are uprooted during the transformation, it is for our higher good, so it is important to trust the process.

During eclipse cycles, we will likely break old and harmful patterns of behavior and develop healthier communication styles that allow us to connect and bond on a deeper level with those around us.

An eclipse is the universe’s way of using cosmic powers to halt us and ask if we want to consider changing direction. They encourage us to take a few moments (at the time of the eclipse) to close our eyes and synchronize our energy with the shadowing of the Earth or the moon (depending on whether it is a solar or lunar eclipse), while focusing on the direction we want our lives to go in and whatever we wish to manifest.

Eclipses briefly pause the universal energy between the sun, moon, and Earth—and during them, we will notice an abrupt halt to the energy in our lives. This temporary seizure offers us the opportunity to gain profound clarity about our surrounding circumstances before pressing reset on all that has previously occurred.

During highly charged energy portals, such as eclipses, we may notice the following:

>> People from our past reappear, so we have the chance to learn valuable lessons, to make amends, or to forgive and release once and for all.

>> Physiological symptoms may manifest, such as flu-like symptoms, ear ringing, or aches and pains.

>> Frequent anxiety or feeling panicky without clear reason, as well as bouts of fear about the future.

>> We might “know” things without logical explanation and find it difficult to explain the source of our information.

>> Becoming more accountable for our behaviour and actions.

>> Premonitions, and vivid dreams or nightmares.

>> Seeing and feeling energy such as orbs, sparks, or flashes of light, and noticing energy warming the palms of hands.

>> Sensitive to light, tastes, touch, and noise—particularly tones of voices.

>> Feeling as though something huge is about to happen.

>> Awakening to past mistakes and no longer repeating them.

>> Chronic fatigue; being around other people feels draining.

>> Feeling zoned and spaced out, or ungrounded.

>> Appreciating that all life is sacred.

>> Releasing, healing, letting go of the past.

>> Overthinking and obsessing over tiny details.

>> Consciously aware of other people’s energy fields and being highly sensitive to negativity.

>> Becoming aware of certain things we have been conditioned to believe.

To combat these symptoms we can:

>> Meditate and remain aware of reoccurring thoughts and feelings.

>> Consume high-vibrational foods, such as fruit and vegetables.

>> Remind ourselves that everything in the universe is made up of energy.

To help ensure this eclipse season (along with the next six months) runs smoothly, it is worth taking time out to figure out what it is we truly want, who we want to be around, and who we are still holding on to (that we really need to let go of). Then we must find the courage to make the life-changing decisions we have been shying away from, so we can open new doors and burn tired old bridges without regret—although be wary, as during the eclipse we are usually more emotional than normal, so it is worth allowing the energies to settle first.

Disclaimer: If you experience any of the symptoms listed here, please also seek the advice of a medical professional. The above symptoms are commonly noted during major cosmic events, however, there may be other medical-related causes.

When Things are Hard, Remember This.