Why Genocide is Exploding in the Age of Trump. 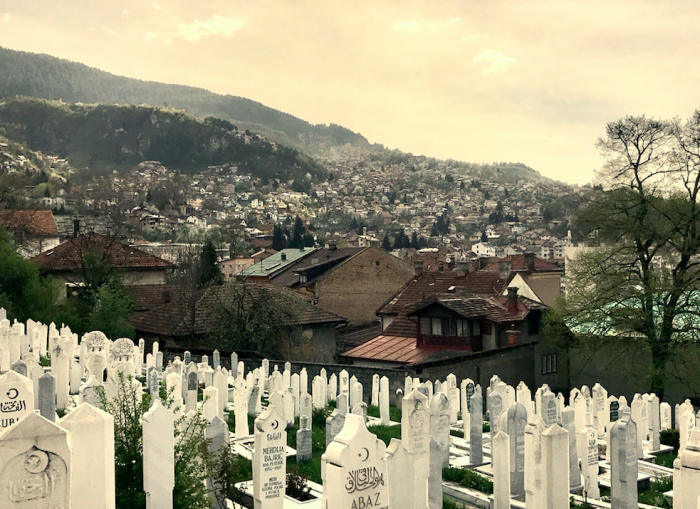 The city of Sarajevo is contained by the mountains like some great cup, filled up at night with smog.

It is a tolerant city where the Muslim call to prayer can be heard on the steps of a Catholic Church, a former Ottoman outpost where the Middle East blends effortlessly into the West. The people here appear introverted and calm, soft and open, and it is one of the most poignantly beautiful places to which I have travelled.

But back in the 90s, Sarajevo was the site of a three-year starvation siege in which civilians were picked off in the streets by Serbian snipers perched in the mountains. Western leaders did nothing to stop the genocide for years until NATO intervened in 1995 in a short bombing campaign that lifted the siege. Then peace returned, with the establishment of a rather precarious, corrupt but multiethnic and democratic state.

It was arguably the first time America engaged militarily in a humanitarian intervention to stop genocide or ethnic cleansing. The U.S. would do so again when the same Serbian regime threatened ethnic cleansing in Kosovo in 1999; when Libya’s deputy representative to the U.N. warned that Gaddafi might commit genocide in 2011; and when tens of thousands of Yezidis were trapped by Isis on Mt Sinjar in Iraq in 2014.

There were successes like Bosnia and failures like Libya, and the motives were often mixed. America and other Western states often did little if anything to stop mass murder in places like Darfur and Syria. But where American intervention was lacking, Britain, France and the U.N. often filled the void, as in the narrowly averted genocide in the Central African Republic in 2014.

Enter President Trump, a man who wonders why, if we have them, we do not use nuclear weapons; a man who sees no problem with nuclear proliferation; a man who is as unpredictable as he appears irrational; and mass murder is exploding in hot spots the world over.

The election of Trump was followed by an all-out assault on the remaining areas of rebel-held Syria. But the bombing of civilians in East Aleppo had already reached genocidal proportions, with regular attacks on hospitals and a siege that had left a population of 250,000 on the brink of starvation. The Obama administration may have ignored its own redlines concerning the use of chemical weapons, it may have let half a million people starve under regime sieges, but few expected it to stand by amid an all-out genocide.

Yet, with Trump as president, Putin and Assad could go about their business with neither censure nor threat.

Attacks on the Rohingya in Burma also stepped up immediately following his election, with reports of children being thrown in fires and women being mass raped—and this is no coincidence. A year later, the Burmese military would ethnically cleanse over half a million Rohingya.

In a stunning diplomatic achievement, the Obama administration successfully enticed one of the world’s most repressive military regimes to open up and democratize. But in the process, its military leaders, who remained autonomous, increased attacks on the Rohingya—Burma’s most defenseless minority—whom the U.N. has called “the world’s most forgotten people.”

Now that Trump is president, the military can go about their business of subverting democracy through ethnic cleansing with neither censure nor threat.

It has been similar with Yemen. Britain and Obama had armed Saudi Arabia in their fight against the Houthi rebels in Yemen, and that fight involved starvation sieges and the bombing of agricultural facilities. The U.N. stated in the fall of 2016 that seven million people were on the brink of starvation, but when the Saudis targeted political leaders attending a wedding, killing 140 civilians, Obama met them with a harsh rebuke and threatened a thorough review of American support. Weeks later, the Saudis were participating in a desperately needed cease-fire and America was limiting arms sales.

But with Trump as president, they can go about their business with neither censure nor threat, even as the famine grows immeasurably worse. It is similar with Israeli human rights abuses.

Israel has carried out increasingly brutal bombing campaigns on Gaza every couple of years for the last decade or so, and the last attack in 2014 involved the targeting of schools and civilian kill zones in which anything that moved was to be shot. Meanwhile, prominent Israeli leaders began talking about Palestinians as snakes that needed to be killed in the womb. But with a couple of thousand civilian deaths, the attack did not reach genocidal proportions, and this probably had a lot to do with the unpredictability of the American response.

We can already get a sense of how he might respond to a full-blown genocide in Gaza from his complete silence in the face of 6,000 Palestinian demonstrators being shot with live ammunition over the course of the last several months. It has now become possible for Israel to shoot hundreds of children with nary a word from the American president, because Trump simply does not care, and he has created such a circus, the attention of the world is focused elsewhere.

Any state that has been waiting to target some defenseless minority but has feared the international response knows that it can now do so with impunity.

So, if Jair Bolsonaro, the newly elected leader of Brazil wants to commit genocide against the native peoples of the Amazon, where he wants to open up more resources to exploitation, there will be little to stop him from doing so. And if Roderigo Duterte of the Philippines, who compares himself to Hitler, wants to kill three million people as he has suggested in his so-called “war on drugs,” which Trump has praised, the world’s most powerful state can be expected to stand aside.

But perhaps the greater concern is that these murder zones will be forgotten amid the chaos.

Genocides tend to break out when no one is looking. They explode in times of war and nationalist fervor. They erupt when people feel insecure and lash out against outsiders. They overflow when the world is in chaos. Times like the Second World War, times like the fall of the Soviet Union, times like that of today. Trump will bring chaos to the world. He will bring a sense of disorder and lawlessness, and he has already made it well-known that he does not care.

The period from 1995 to 2015 has been a remarkably peaceful period of human history, extensively documented in Steven Pinker’s, Better Angels of Our Nature. But it can seem just the opposite for America watchers, who tend rather to see in this period an ever-intensifying era of military engagements. What we all too often miss is that while America has been busy starting senseless conflicts like the Iraq War, and humanitarian interventions like in Libya, the rest of the world remained relatively quiet.

It is one of the unfortunate ironies of history that life is often most peaceful under the boot of empires. A clear balance of power invites stability, and a single hegemon can set others to rest. But when the balance of power is in flux and many vie for dominance, things can get bloody. For war breaks out where power vacuums abound; when states underestimate the strength and resolve of rivals; and when great powers proliferate.

The age of American decline, which many mark with the Great Recession, was perhaps always bound to be brutal. Foreign policy analysts have been arguing for years now that we have shifted from a unipolar to a multipolar world, and such a world will be filled with war. As America loses resolve, other powers like Russia and China are filling the power vacuum, and everywhere it seems states are testing the boundaries of the international order.

But the rise of Trump has signaled the end of any predictable order whatsoever. We should expect it to be violent, bloody, unpredictable, and dangerous. And the ones who will be hit the hardest are the most vulnerable, like the Rohingya, the Palestinians, the Yemenis, and the native peoples of the Amazon.

Genocides are exploding in the age of Trump and we will be picking up the pieces for generations to come.

Theo Horesh is author of The Holocausts We All Deny, from which this essay is derived.