And Now, He is Stardust.

I was looking at the stars last night and thinking of my dad.

I think of him quite often in the months since he passed, contemplating the nature of our connection now that he is no longer physically present.

I look at the stars and wonder, “That star over there, the one that shows up every night, just to the left of the big birch tree in my backyard…is that you, Dad?”

My dad was a man of faith, and he raised our family in a community of faith. But he was never one to consider his way the only way in any aspect of his life, and he accepted that his children would develop their own definition of faith. In this way, he taught us yet another of the lessons about inclusion without judgment that were the model for his life.

I have always felt compelled to learn the “how” and “why” of things—how things work, why things are the way they are…the science of things. As I’ve gotten older, my version of faith has evolved as I’ve tried to align it with the laws of science.

You see, I believe that faith and science can coexist.

Dad and I had some late-night hospital talks before he passed about what the future held, and I shared with him how I’ve settled the balance between science and faith for myself.

Science taught me that every living thing is made of atoms. Physicists tell us that the atoms of our bodies are traceable to stars that exploded and spread their elements across the galaxy, enriching our planet with the chemistry of life. In this way, we are all connected—to each other, to the Earth, and to the rest of the universe. We are made of stardust, the astrophysicists like to say.

Science also taught me that energy can neither be created nor destroyed—it can only be transformed from one form to another. In life, the human body is comprised of matter and energy. We are our own little universe within The Universe, constantly exchanging energy with our surroundings.

In death, the atoms and energy of which we are made are repurposed, reabsorbed into the collective energy that surrounds us.

On the faith side of things, I believe that faith is a choice. I choose to believe that what some would call our consciousness—or our soul—is the very energy that gives us life, that which makes us individual and unique. What some may call God, or a higher power, may be that collective energy from which we are created and to which we return. I look up at the vastness of the cosmos, and I choose to believe that all that energy has a source, an origin, no matter what we call it.

My three-year-old granddaughter, Claire, shared a special bond with her great grandfather. Upon his passing, and with no prompting or prior conversation about the subject, she announced that angels had come and fixed her Papa, and he was on a journey through the stars—another label for that energy, from a toddler’s perspective. Pretty damn insightful of her.

Apart from the labels, faith and science maybe aren’t that far apart. Science is our attempt to understand how the world works. For a person of faith, no matter how they label their belief, what greater form of worship/appreciation could there be than to seek that understanding?

My dad’s faith taught him that there would be a life after this one. Science taught me he will always be with me in one form or another. Maybe we’re both right—we’ve just been calling it different things.

One of the biggest lessons I’ve learned from Dad’s life is that labels don’t matter.

What matters to me now is knowing that all the photons that ever bounced off Dad’s face, all the trillions of particles whose paths were interrupted by his smile, by the touch of his hand, have raced off like his great grandchildren at play, their ways forever changed by him. And all those bits of energy that bounced off him were gathered in the particle detectors of our eyes, and those bits have become constellations of neurons whose energy will go on forever.

I’m comforted to know that his energy is still around. According to the laws of science, not a bit of him is gone.

Claire says he lives in the stars now, and I have faith that she is right. 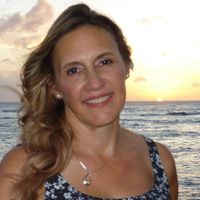