How Acknowledging our own Racism makes us Better Parents—& People. 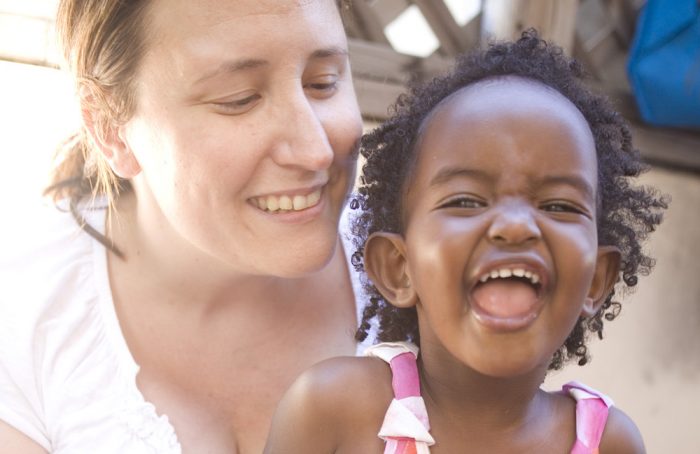 Jordan Peele’s film “Get Out” is filled with near-perfect dialogue.

One of my favorite lines comes from Dean Armitage when talking to his daughter Rose’s black boyfriend, whom she has brought home to introduce to her family. “I’d have voted for Obama a third time if I could,” Armitage offers to his daughter’s beau, apropos of nothing they had been discussing.

In one line of dialogue, Peele’s message to the audience is clear: these folks think they are the “good white people.” Definitely not racist.

That’s about where I was when I decided to adopt my daughter from Ethiopia. I was one of the good ones, I believed. I had a genuine interest in civil rights and black literature. I even studied African and African American history in college. I certainly wasn’t racist. And I thought (now cringing) that, as lucky as I was to get to be a mother, my future daughter would also be lucky to be raised by me.

Well, I won’t bury the lede—I was so very wrong.

So too, likely, would a majority agree that if your child was adopted, there is an additional set of skills and understanding you are responsible for. In fact, the unique trauma and developmental challenges adopted children face are spelled out well in Nancy Verrier’s book, The Primal Wound. Verrier explains the immediate and lasting effects of a child separated from her or his birth mother—even if it happened at birth, and whether or not the child is made aware of their adoption.

Now, add to this tall order parenting a black child when you are white, something that is becoming ever more prevalent in the United States.

By and large, adoption is the origin story for most transracial families. A recent statistic states that 73 percent of adoptable children of color are adopted into Caucasian families.

I attended an additional training session for those of us adopting internationally called “Journey Abroad,” which discussed cultural sensitivity…I think. I know I was asked to bring a traditional Ethiopian dish to the potluck.

During the process, I was also asked a series of questions, including how I would discipline my child, whether I would indoctrinate her or him into a specific religion, and what childcare plans I was making for when I returned to work. These are necessary concerns for a new parent, for sure, and adoption social workers are right to ask them.

What I and no other white prospective parents I know were asked to do before bringing a child of color into our home was to face our own inherent racism and identify how we are going to address it and recover from it while parenting a child of color.

Because this, I believe, is the Rosetta stone of parenting transracially without inflicting additional lifelong trauma on your child. Acknowledging and dismantling my own inherent racism is vital if I am going to provide my daughter with all the tools necessary to navigate America as a black girl and beyond.

Moreover, without admitting my own racism, there is no room in our family for celebrating my daughter’s blackness. It remains a trigger of the shame of my racist beliefs and assumptions, something I have a visceral aversion to and want to run from—not something I am drawn to and want to explore and know more about.

Think about that: my daughter’s blackness is a constant reminder of my racism. Without acknowledging that this is the anguishing truth, I cannot fully acknowledge my daughter.

In fact, once my own racism was a part of my daily consciousness, what I did not just for my daughter but for our family was center blackness, black culture—including its art, history, struggles, triumphs, and, most importantly perhaps, its power and joy—in our lives. I am not talking about quoting James Baldwin and attending Black History Month events. Nor do I mean it is as simple as downloading “Black-ish” from iTunes, even though my daughter and I are as religious about watching that show as we are about anything.

When I say “centering blackness,” it means a reorientation of our entire family’s worldview. My worldview. This is not accomplished by increasing our consumption of black popular culture, but by following a genuine curiosity of another angle or perspective to all events, news, and information that otherwise do not mention race.

And every white person who clings to their “I am not racist” mantle deprives themselves of their own child’s fullness and magic.

Trista Schroeder is a lawyer, writer, and mom. Back home in New York after a 15-year self-imposed exile on the west coast, she is completing her first novel. … Read full bio