I have them. I was born with them.

Well more so, I grew my own rather luscious pair when I was 11 years old.

Being a tomboy—or really what I would refer to now as a “physically strong young woman.” I hated that, because I liked sports, I was seen as manly. Some boys called me “Samaaaaaantha” at school because I actually knew how to throw a cricket ball and how to play football—and really over all I was just physically proficient. But, in their minds because of my skill “I didn’t play like a girl.” F that.

Anyway, back to the boobies.

They were always something I was ashamed of. I used to wear two bras and tape them down when I played soccer. I didn’t like the attention they received. Or the way the ball would bounce off in odd angles when I jumped up to “chest the ball” back to my feet.

Boys were only interested in me because they wanted to cop a feel. Men would approach me and ask for a hug and then squish my breasts hard against their eager chests.

I soon realised that girls were sometimes worse than the boys.

At the age of 12. I had a female school teacher that used to call me out in front of the whole class in a dramatic Scottish accent “stop sticking your chest oooot.” Which I wasn’t purposefully doing. I just had big boobs.

When I was 13, I remember two girls delivering a note to me in class that was supposedly from a teacher from another class. “Stop sticking your t*ts out” the note read. I could hear the girls cackling as they ran away from my stony silent classroom, as I stood alone. Cheeks coloured the deep shade of mauve and beetroot. Knees shaking as my teacher asked what the note was about.

My nickname became Big T Sam—guess what the T stood for or BTS for short. My name was Sam at that time (another story perhaps) and I ended up buying thick, black, rimmed glasses. And then I became the “Sam with the glasses,” which made for a nice change.

Though even with my new glasses, I would still constantly hear women snigger and sneer if my breasts were in any way, “on display.” I remember one time I was standing in line for the toilets in my bikini—(wait for it, because I’m an absolute freak…so much that Rick James would literally be quaking, in his glittery space boots)—I was waiting in the line for the toilets at the beach. And I hear these girls in the line say to each other, “Check out that sl*t with big t*ts in the blue bikini top over there.” They were all looking in my direction.

Me being me at the time, 20-something and shouldering a lot of unresolved trauma coupled with huge amounts of energy, I strode up to them with a whole whale’s weight of sass in my step. That sass was a disguise for how butt hurt I actually was.

“Would you rather I was dressed in an 80s ski suit? Would that make you feel more comfortable? Something up to the neck? Perhaps a space suit with the helmet on? Just to make sure that I’m well and truly hidden from view? Then I wouldn’t be a sl*t, hey?”

They gawped and said nothing. I returned to my place in the line, filled with pride for sticking up for my boobies.

But, after a lot of experiences like that I developed boob trauma.

Yes that’s right. I was traumatised by my boobs and the attention they got.

So, for the last few years my boobs have remained hidden away. For fear of attention, fear of unwanted desire. Fear of women being mean or men being sleazy. They honestly felt numb to me. A little dead. When I looked at my boobies or even touched them. I just felt grief, coupled with shame and anger.

I have noticed something too. Girls that buy their boobies, as in get implants, they flaunt them like there’s no tomorrow. Side boobs, underboobs and good ol’ fashioned cleavage. They work them, enjoy them, and get their money’s worth. They feel comfortable with their ample size. And enjoy how they make them feel.

Yet, I find that a lot of girls with natural breasts feel the exact same way I do. That they need to hide them for some reason. Wishing for them to be smaller. To make ourselves smaller and less than. Even though The Great Creator and our Mamas had gifted us—very kindly, I might add. With beautiful breastsicles.

Lately, I’ve been working hard on healing my traumas. Deeper traumas than what I’m talking about. Things like rape and sexual exploitation. And through that work I realised my disdain for my breasts ran even deeper than I first realised.

Here is where I have begun to reclaim my body.

Yesterday, I saw this sweet body suit with a criss-cross over the boobie area. I just knew that was going to look sumptuous.

So I bought it.

And here I am—rocking it. I wore it on the ferry and into the city to drop something at the ferry office. I literally took it for a walk around the block and came straight home.

And each time someone approached me that I wasn’t attracted to, or I felt slightly afraid of, I had to fight myself from putting my jacket over my breasts. And if someone approached me to talk to me, I immediately assumed they were talking to me to look at my breasts. I seized up over and over again. Out of habit, I wanted to hide myself. To protect myself from unwanted attention.

But I decided to disarm, to take my protective cloak off and really look at why I was being triggered. If someone really got joy from stealing a glance at my décolletage, was it really that bad? As long as they didn’t try and touch me without consent and weren’t too aggressive about it. And, if they were out of line, I was confident enough in myself to manage my boundaries, right? Surely.

And, if a woman felt insecure about my presence did that make me or even her bad? No. I actually feel compassion for her, as I know how that feels. To feel “less than”‘ in another woman’s presence. It’s something most of us experience multiple times in our lives. Given the opportunity to have a discussion with her now in my later years, I would rather build her up and help her to see her own beauty. Rather than give her my whale-weighted sass and defence like I might have done, with less laps around the sun.

I have this amazing friend Ross, who always loved me and always believed in me—even in my lowest times. He had nicknames for both of my breasts. The left one was called Des, and the right one, Troy. Because together they destroy.

PSA: if you’re triggered by this post, maybe you want to have a look at why that is—we’re such interesting and complex beings, aren’t we? Often we’re thinking that we’re feeling something for one reason, but when we look through the layers, we realise our feeling is attached to something completely different than what our first reaction was.

And, by examining these thoughts, we can often reclaim our own power back and dissolve the judgment we are feeling toward others.

Big love to all. 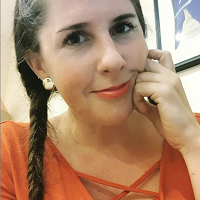 Jeanne Reynolds: I am what I like to call a Creative Node. Many creations and ideas spring forth from my mind. All angled at improving my home country of Aotearoa, New Zealand… Read full bio

Why Self-Care needs to include your Boobies Too. “Healthy Breast” Massage Oil. {Recipe, Cancer Care & Self-Exam Video} Get to Know your Nipples: 5 Unusual Facts. Mammograms: what’s the Worst that could happen, Right? 12 things to consider before Breast Implants.
See relevant Elephant Video