Lessons in Love from Elementary School. 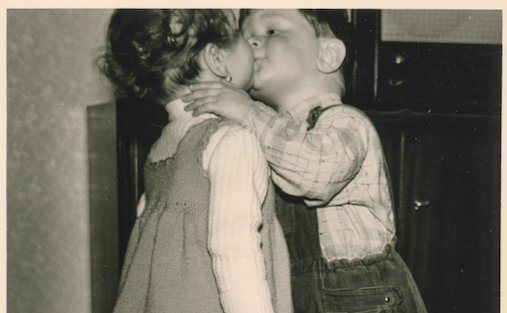 Emma was in my preschool class; we finger-painted rainbows and held hands until all the paint turned brown.

She was also in my kindergarten class. I learned to spell her name before my own: EMMA. And, once, on the bus, she kissed me. She was placed in a different first-grade class. We lost touch. I saw her holding hands with a new boy in the hall. I was happy for her.

So it goes, I thought.

First grade, I planned a birthday party six months before my actual birthday. At the top of the guest list was RACHEL; just Rachel, I couldn’t spell her last name. I hung it on the fridge. Three months passed, and I saw her at the baseball field. I was wearing a full-body blue power ranger outfit and tried to say hi. She told me I was weird and to leave her alone.

I went home and crossed her name off my guest list in great big red crayon. I pulled down my power ranger mask and cried myself into a little, blue raisin. I sat on my kitchen floor and took in the dry air with tiny hiccupy gasps. My mother found me there. She said, “It will be okay.”

Second grade, I fell in love with Sara. Once, at a sleepover, someone dared me to call her house. I did. Her father picked up.

“Who the f*ck is this! It’s one o’clock in the f*cking morning!”

I hung up. My friends thought it was hilarious.

Soon after, I saw her holding hands with Nathan. Nathan!

I tried not to cry. I pretended to be sick and went home where I couldn’t hold it in. My mother asked, “What’s wrong?” and when I told her, she said, “Well, you had every opportunity! And you screwed it up!”

Or maybe she didn’t. Maybe she just said, “Why don’t you lie down and let it all out.”

Either way, that’s what I did.

Third grade, Meghan transferred into our class. She’d just moved to town and she was gorgeous. When she got up in front of the class on her first day, she said, “My name is Meghan. I just moved from Texas. I’ve never been ice skating.” And her words got stuck in my eye, and I knew I was destined to take her ice skating. But then I broke Andrew’s ruler when then the teacher was out of the class.

Meghan told on me. I was yelled at in front of everybody!

And so, I was overtaken by a seething hatred instead. I didn’t know my little body could hate so much. And I had an older brother.

Fourth grade, my pants fell down during a gym class soccer scrimmage. Underwear and all. There was no love that year.

Sixth grade, it was Sabrina, blue-eyed and baked by angels with strawberry blonde frosting on top. I would have wanted to eat her if it wouldn’t have meant she’d never be able to look at me again. My older brother had a girlfriend and we went to the mall for him to buy her a bracelet. My mom asked, “Isn’t there anyone special for you, hon?” And I thought of Sabrina. And I told my mom about her. Mom said, “Oh! I bet she’d like a bracelet. Why don’t you buy one for her?”

“Go for it,” my mother said. “What’s the worst that can happen?”

We were in line after lunch. She was at the front. Me in the back. Two girls ahead of me were snickering and watching me. Then they turned.

“We heard you bought Sabrina a bracelet?”

In my memory, they said this in-sync with one another, and their eyes flashed red and their tongues were forked. Maybe that was the case, maybe not. But then they said, “She doesn’t even like you!”

They turned to others in the line. “He got Sabrina a bracelet and she doesn’t even like him,” they said, with their red eyes and forked tongues. I was so embarrassed and angry and my legs were cold. I wanted to be carried away, never to be seen again, or love again.

But I thought about what my mother had said. And so, I went for it. I walked to the front of the line and put the wrapped bracelet in her hand. And the worst happened; the line laughed like a celebration wave at a baseball game.

And I went home. I was a mess.

But really, it was all I needed to know.

After 20 years of Dating, this is the Most Important Lesson I’ve learned about Relationships—& Myself. The 4 Gifts of Rejection. 7 Words from my Grandmother that Reminded me What Love Is.
See relevant Elephant Video