Letting Go of the One that Got Away. 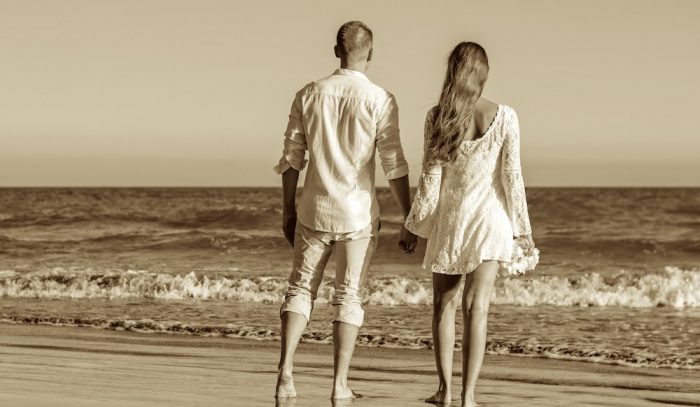 When I was 20 years young, I met a man I thought was meant for me.

When our eyes met across the room, a thousand lifetimes flashed before me as I gazed into the depths of his dark, glittering pools.

There was a flicker of instant recognition in my soul. I was drawn to him like a magnet being pulled by a force beyond my control.

As we talked about chemistry and biology, we placed our hands together. Electricity sparked between our fingers, resonating with the fluttering that started in my heart. When our lips met for the first time, a million shooting stars lit up the sky.

He awoke a fire in me that’s never been extinguished. He was contagiously fun and ridiculous. Just like me. I knew we had to see each other again.

This was when Facebook had just been introduced. It only existed in the college campus realm, but I found him. We connected and started to get to know each other through sporadic, lengthy messages. He wrote eloquently, and I was intrigued by his intellect.

Months later, he finally came to visit me. The minute I set eyes on him again, my heart was ignited, my soul ablaze. He told me the stars were lining up, and I could feel it too. He spoke my language, and we seemed to view the world the same way.

When we were together, I believed in destiny and magic again. If he would have told me I could fly, I would’ve sprouted wings and owned the sky. I was completely enamoured. I wanted nothing more than to spend as much time with him as I possibly could. Foolishly, I presumed fate would give me that. When he left, I thought it was the beginning of something that I had been dreaming of since I heard my first fairy tale.

Sadly, that wasn’t the case. He apparently was not as in tune as I had presumed. However, my idealistic heart refused to give up on my infatuation.

I tried to pretend I didn’t care, but I’d get intoxicated and lose all control. I’d call him repeatedly and leave countless unanswered voicemails. He would humor me at times, and we stayed in contact as friends. We were brought together a few more times, like galaxies colliding as we crossed paths through space. Every time we separated, it hurt a little more than the last.

I kept waiting for him to choose me, but he never did.

We would engage in long emails and talk about how incredible it would be if we were together. He would always leave me hanging with the words, “Maybe in another life.” This only kept hope alive that we could still be together in this one. There were not many days that the thought of him didn’t cross my mind. I held space for him in my heart for far too long.

Over the years, we continued to reach for each other in the darkness and help each other find the light. He told me he loved me once, and I finally spoke the feelings aloud that had resided in me from the start. I don’t know if he ever truly grasped how unconditional my love was for him, or how many times I let him break my heart.

One day, he completely cut me off. He said he couldn’t talk to me anymore. He needed space to figure things out. This time, I didn’t chase after him or beg him to stay in my life. I finally loved myself enough to let him go. I am grateful that he walked away, because I don’t know if I ever would have.

Looking back, I can see why it never worked with anyone else during that time period of my life. In the back of my mind, I always thought that we would end up together. Once I had felt what I felt with him, even if only for a moment, I didn’t think anything else could compare.

I had no idea how incorrect that notion was.

People show you how they really feel about you with their actions. Words are meaningless without something to back them up. Did I truly love him or was I in love with the idea of him? I think it can be harder to let go of what might have been. If you never fully have the opportunity to explore something, you hold on to the possibility. It’s just a fantasy, and the reality probably wouldn’t measure up.

Three months after we officially parted ways, I met the man who became my husband. A man who saw me for who I truly was, and chose me from day one. A warrior who fights with me and for me, and continues to choose me. Every single day.

In him, I’ve found the type of love that dreams are made of. A love that awakens the mind, brings peace to the soul, and runs deeper than I ever could have imagined. He is my true match, my best friend, and my soulmate.

What if I had never been open to finding him because I was still holding onto someone else?

When someone is removed from your life, there’s a reason for it. The universe knows exactly what it’s doing.

The Sweet Vulnerability of Unconditional Love. It is Not Your Fault that He Couldn’t Love You. Soulmates: You don’t Find Them, They Find You. A Soul Mate is a Mirror: We Accept the Love we Believe we Deserve.
See relevant Elephant Video