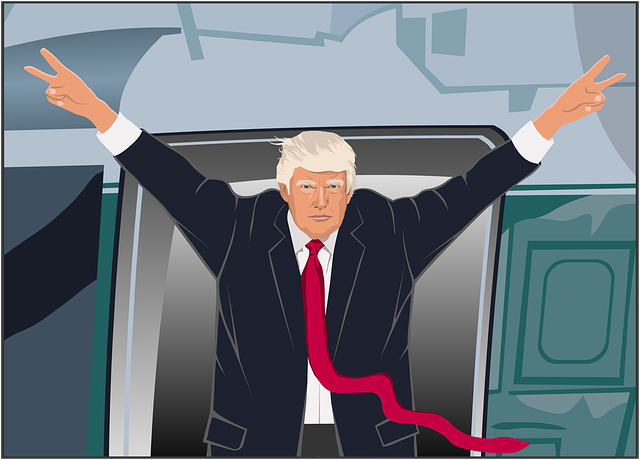 Best comment: “Trump is so angry. He needs to calm down and maybe just go see a movie with his friends or something.

“My representative, Dean Phillips, is the first Democrat in MN-3 since 1961. He just voted to impeach.

Updates: “The impeached President of the United States just mocked a congresswoman mourning the death of her husband who was a long time congressman by saying that he was probably in hell right now. This is our timeline.”

Next up: Lindsey said “I am not even going to read the charges I am voting to acquit“

Senate Majority Leader Mitch McConnell, speaking to Fox News, was even more explicit. “Everything I do during this, I’m coordinating with White House counsel.

“I am trying to give a pretty clear signal I have made up my mind,” he added later. “I’m not trying to pretend to be a fair juror here.” 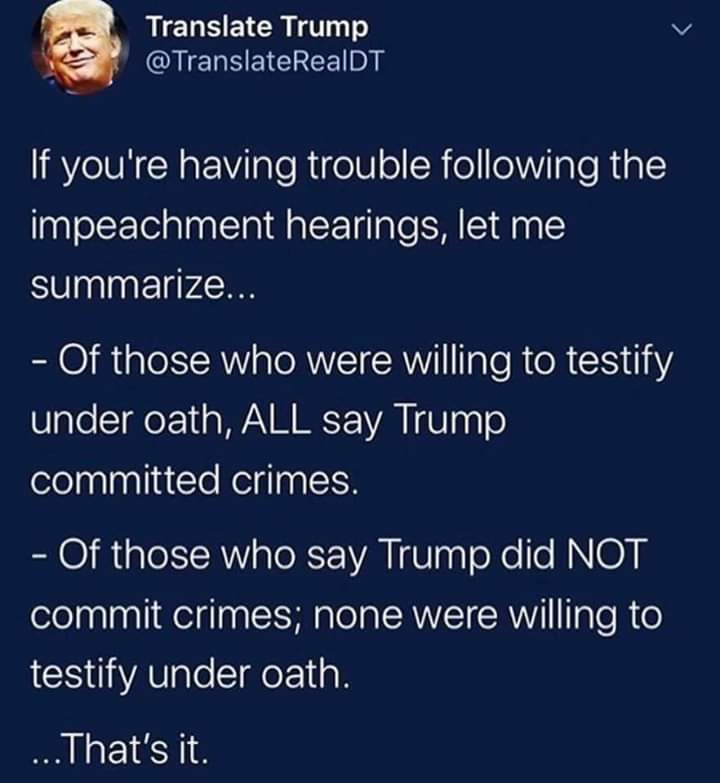 Nixon expressed great remorse for Watergate, ultimately resigning and conceding he “Let the American People down”. Days before his impeachment, Bill Clinton said “I am profoundly sorry for all I have done wrong in words and deeds. I never should have misled the country, the Congress, my friends or my family”.

Donald Trump has expressed not one scintilla of remorse for his actions, or conceded that they were in any way inappropriate. He continues to describe abusing the power of the presidency to extort a foreign country into ratfucking his political opponent and help him win the 2020 election as “Perfect”. ~ redditor

These last few months have proven beyond a shadow of a doubt that this impeachment would never have happened if voters hadn’t come out in such great numbers in 2018.

So do it again, do it better, stay informed and stay on fire for truth and justice, check your registrations, get your friends and neighbors and coworkers and exes and strangers on the street to go with you en masse and VOTE in 2020 in such high numbers that attempts to steal the election or interfere with the outcome fail. Change is still possible and this nation can recover, but it won’t without you.

To add on this, see if you are registered to vote. Every vote matters! ~ redditor comment

Elephant Journal articles represent the personal views of the authors, and cannot possibly reflect Elephant Journal as a whole. Disagree with an Op-Ed or opinion? We’re happy to share your experience here.  ~ ed.

I was scrolling through my Instagram feed a bit mindlessly this morning after a workout when I came across this post by The Guardian.

As someone who supports Trump’s impeachment, my first response was joyous…but then I read a little more.

Trump has been impeached on both Article One: abuse of power and Article Two: obstruction of congress, but as Nancy Pelosi warned, those who support this motion shouldn’t celebrate yet.

While he faces an imminent trial in the Senate, Trump is still president.

“A trial is set to take place in the Senate in the New Year. The Republican Party has a majority there, making it almost impossible that the president will be removed from office when senators cast their votes.”

Here’s the ABC News summary of the situation as it stands:

Or for a lighter take on matters—from a Buddhist perspective, taking ourselves less seriously is a good thing—here’s “The Daily Show’s” summary:

Hang on, did they just compare Trump to Jesus?! Anyway…

(Unlike Jesus), he’s fuming and fobbing it off and asking for support all at the same time.

“Trump has shown no contrition at all over actions he thinks weren’t wrong at all. The impeachment has consumed his time, between dictating his irate letter to Pelosi, phoning his associates to vent into the wee hours and plotting his defense in a Senate trial, writes CNN’s Kevin Liptak. He has been ranting about impeachment in phone calls with Republican members of Congress over the last several days and nights, according to multiple GOP sources.”

As voting took place, the president was addressing a campaign rally in Battle Creek, Michigan.

As the BBC reported, he told a cheering crowd: “While we’re creating jobs and fighting for Michigan, the radical left in Congress is consumed with envy and hatred and rage, you see what’s going on.”

The official statement from the White House was that the president is “confident that he will be fully exonerated” in a Senate trial.

So, while our first reaction may be to celebrate moral victory, the process is complicated and could possibly be entirely anti-climactic in the end.

As we await the outcome, perhaps all we can do is follow this advice from the Dalai Lama on President Trump. And vote in 2020.

Until then, here are more ways to get involved and make your community better, right now:

Talk to your Neighbors

And more in relephant reads and videos below…

Khara-Jade Warren is Elephant Journal’s Managing Editor of Partnerships. She writes about wellness, mindfulness, love, grief, and motherhood. Connect with her on Instagr… Read full bio

Climate change isn’t Trump’s problem. Sacred Activism: We are the Ones We’ve been Waiting For. How to Love Everything Deeply, even Donald Trump.
See relevant Elephant Video