Are we just the Victims of Ancestor Guilt Tripping? 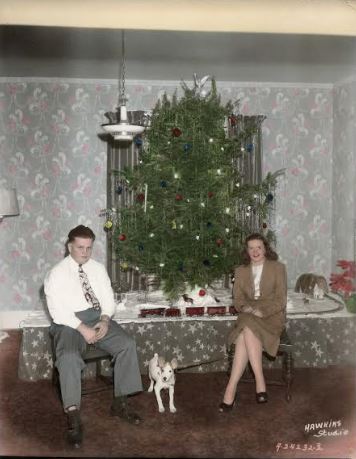 I’ve become the custodian of artifacts, pictures, treasures, and trash that have landed in and squeezed the space for attention in my small apartment.

I’m not so sure I had a choice.

I’m looking at a photograph of my mother and her brother, Victor. It is undated, but I’m guessing it was taken around 1940, when they were 16 and 18. My mother is smiling and Victor is sullen, as he appears in every picture I’ve ever seen of him. They sit in wooden chairs in front of a low table. On the table sits a decorated Christmas tree. A model train set track is laid out encircling the tree and on the track a model train is poised, ready to run; an engine, a coal car, and three boxcars. There are other elements in the photo, including my mother’s dog, Tippi, a brown rug, and walls covered in a gray wallpaper with a design of large red and white flowers.

My attention though sticks on the train. As I was growing up I was told that someday Victor’s train set would be mine. Is this that very train?

To my left is a plastic storage box and in the box is an unorganized collection of model train cars. Three engines, one of them metal and two plastic, and an assortment of other boxcars and flat cars. Is this that very train?

In the presence of these pictures and this hodgepodge of train cars, I become paralyzed, mesmerized by the meaning and import of the lives that surrounded them so many years ago. The paralysis is a pain that prevents me from taking action with these items, and yet, also soothes me with a sense of connection and continuity to a history otherwise undocumented.

This box came into my possession after my parents passed. I’d been told “someday they would be mine” and now I feel an obligation to hold on to them. That’s a strange obligation—something implied by an ancestor upon a descendant, which basically says “you are the one to carry this forward.”

I’m struggling to answer what is the “this” in that implication. Is it the artifact—the train, the dish, the watch, the whatever? Is it the memory? The memory of the person? Or the meaning of the life the person led embodied by the piece of material now sitting in a box?

The train cars by themselves do not seem to hold much import. These are not items that would capture high bid values at an auction. They do serve to conjure up a memory of the person who left them behind. The memory alone though is not very rich and at this point there are few living souls who could share that memory.

The artifact and the memory can provide the elements necessary to conjure a meaning. If the train set is the lead, the memory is the added ingredient, and the alchemist’s prize—the gold—is the meaning that can be derived.

In my case, I see my uncle’s young picture, I hold the trains, and I’m driven back into a whole storehouse of memories of him, of the house he and my mother grew up in, their parents, the extended family in their small town, the many times I visited, and on and on.

And then I put myself into their lives, to see the world as they experienced it, to try to understand the choices they made, and the outcomes they created. When I was young enough to spend time with them, I was not old enough to ask the kinds of questions I would ask now: what brought my great grandfather, the immigrant from Sweden, to this small farming town in Illinois? How did he cope as a single father of nine children after his young wife died at age 37?

What was my grandfather’s life working on the railroad like? How did my grandmother’s family travel from the House of Burgesses in Virginia, west to the Shenandoah Valley, and then south to Kentucky and Tennessee, and then end up farming in Illinois? What was life like in the household for my mother and uncle, especially after the death of their older brother at age 12?

Why did my mother leave and move 1,000 miles away at the first chance she got? Why did my uncle never leave the family home, living a spartan life with his parents with whom he frequently argued? And when did he play with this train set? Some of the cars seem to be pre-WWII, but some of them seem to be post-WWII. Was he still buying and playing with a train set like this after he returned from his days in the Army during WWII?

All of these are questions I cannot ask directly of them—at least not in the conventional way. The pieces and pictures of their lives seem to carry a message though and when I immerse myself in them, I sometimes feel as if they are talking to me, imparting the meaning and context of their lives.

It is both satisfying and a burden.

As a burden, it seems like I become the workhorse to help carry through with the unfulfilled elements of their lives. As if they are saying “we got this far, you take it to the end or pass it along.” This burden of having to hold on to the pieces, the memories, and somehow help them conjure, and carry forward, the meaning of their own lives is what I mean by ancestor guilt-tripping.

So, in that sense, I’m not a victim at all. And it’s not ancestor guilt-tripping. More like ancestor meaning-making and I’m the prime maker.

My challenge is to discern the difference. To keep my own agency in this process intact, and find a way to both incorporate what I’ve inherited, and to make it generative and not restrictive for my own children and grandchildren.

I have dozens of boxes of pictures, documents, and pieces to sort through, so I have plenty of opportunity to practice! 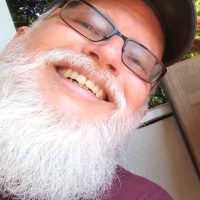 Jefferson Armstrong is a refugee from the government acquisition and contracting business. He left the 60s and early 70s with a personal mission to change the world and found … Read full bio

What’s in a Name—& Why I Decided to Change Mine. My Great-Grandma, the Knocker-Upper. Forgetting our Roots is the Disease of Modernity. The Struggle of an Adult Adoptee. {Chapter 3} How my Grandpa’s old photos led to an Unexpected Lesson in Compassion.
See relevant Elephant Video