A Secret Kiss during a Global Pandemic. 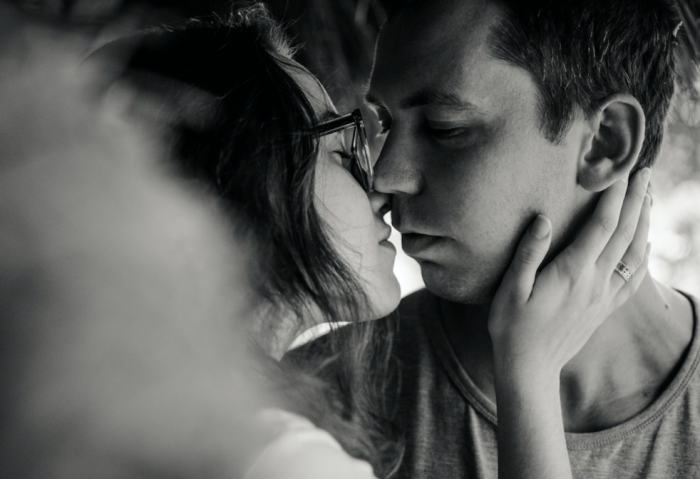 It was when I went on to Spotify to find something sad to play that it all dawned on me.

Three days ago, I thought, I was happy. I was blasting Chuck Berry with my kids in the car. The memory was a fabulous one. So, what was it that transpired in the last few days that brought me to this dark place? I hate to have to even admit this out loud, but it was a perfect stranger.

I was waiting for Monday to roll around for weeks. On that day, my plan was to bus into the city and meet my agent for lunch at a popular Italian restaurant in the Theater District by Times Square. As I exited Port Authority, the day was full of sunshine and promise, even though most of Manhattan was already in a state of panic about the outbreak of COVID-19. If a person sneezed, everyone seemed to dart in all directions. Even at the bus terminal, most people were pretty wary about touching doors or handrails, but for the most part, people were still going about their business unhindered.

By the time I got home at about five o’clock, I was ready for my four-day work week. I had a list of suggestions that my agent wanted me to tackle before the book was released on the last day of March, and my heart was filled with excitement.

So, when I received the notification that Kaitlyn (not her real name) liked me, I ignored it. It sounded like trouble anyway. I called in a take-out order at my favorite sushi restaurant and straightened up my apartment a little. That is, until I realized that the name “Kaitlyn” sounded somewhat millennial. Like a victim walking into that fatal dark room in a horror movie, I clicked on the notification.

Of course, she was young and pretty.

I will fight the temptation to glorify the days before we met for dinner, but suffice it to say, there was a lot of promise. Every objection that I ran into during my dating life was discussed and she did everything to put me at ease. My little daughters? No problem, she said. I’m a mom, too. My ridiculous work-schedule? Easy, she said. I work a lot, also. I’m in recovery, I admitted. That doesn’t scare me, she said warmly. I drive a truck for a living. That’s so cool, she wrote back.

This is where my hopes began to get away from me. As a veteran of dating apps, most would-be relationships were usually cut short over one of those half dozen pieces of baggage that I carry with me everywhere I go.

We met at the independent coffee house in my college town. The agreement was that we’d go for a walk and if things seemed okay, we’d graduate to dinner at the Thai restaurant on Main Street.

We talked and talked until the railroad trail we were walking was pitch black.

Then we headed over to the restaurant. There was never a time during the dinner where the conversation became stilted or awkward. Still in all, having been the victim of misreading dates in the not-so-distant past, I did not allow myself to assume anything.

As I walked her to her Subaru, I asked if she’d be interested in going out again next weekend. She said she would. We hugged and she got in her car. As I drove home, I could not help feeling like this might be the beginning of everything I was looking for out of life.

So, the next day, when I texted her in the late afternoon and she returned a flat, one-word response, six hours later, I knew—once again—I totally misinterpreted everything that happened. Normally, I don’t read into things so quickly, but the amount of time that elapsed between my message and her response was markedly different that day than it was the three days leading up to the date. I can be clueless at times, but I’m not that clueless.

For some of us, love is a peculiarity. We see that archetypical scene of Charlie Brown running to kick the ball and Lucy pulling it away every time and we know exactly what that is. It transcends the old self-help chestnut—the definition of insanity. We keep doing the same things and know that at some point, we will gain a different result. Even if it kills us. The other thing I can assure you about Charlie Brown is that it never feels any different when he lands on his butt. The pain is the same the first time as the 75th time.

I was about to get ready for bed when I got a call from my friend, Sarah, asking if I wouldn’t mind driving her to pick her car up from the body shop. I told her it wouldn’t be any problem. Physically, my body—being dragged down by the blackness in my brain—just wanted to crawl under the covers and die for six or seven hours. I fought that urge because I love Sarah and I knew just being in her presence would be healing.

We drove into the night and I told her the story. She said the things that friends say to each other. I knew she was right—at least intellectually. Emotionally, I wasn’t having it. My emotions wanted to wallow in the mud pit of rejection and sadness. I’m pretty sure she was able to pick up on that.

She got out of the car and leaned into the window. Her blue eyes looked intently into the sad, puppy dog eyes I could feel hanging on my face. She kissed me on the lips tenderly and pulled back slowly.

“You are beautiful,” she said. “I don’t want you to ever forget that.”

She walked to her car. I didn’t need to overthink what just happened. I knew that that was not the start of something between the two of us. I knew it was something sacred that would never be mentioned again. It did exactly what it was meant to do. It swirled up my emotions so that I wasn’t able to land back into the depths of sadness she pulled me from.

I still felt a little strange, but I went home and slept soundly. I needed to get a little sleep if I was going to try to kick that football again.

Dear Lover who Pulls Away: Thank You. Love at First Sight or “Have a Nice Life:” The Binary Hell of Online Dating.
See relevant Elephant Video