Why Trump would Love to run against Biden, but Hate to Run against Sanders. 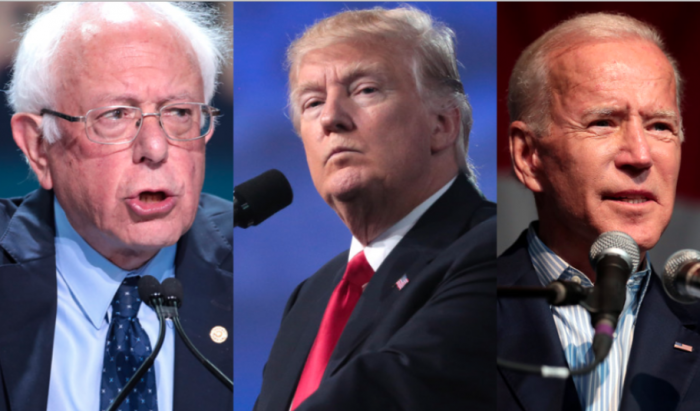 Relephant: The Two Perfect Candidates for a Joint Ticket are still in the Primaries.

Super Tuesday showed us where this is going.

It comes down to two candidates with realistic chances of winning the nomination: Joe Biden and Bernie Sanders.

Just a few weeks ago, Sanders’s supporters were almost claiming an early victory, while Biden’s campaign was not doing well at all. South Carolina shook up things and brought Biden back to life. Pete Buttigieg, Amy Klobuchar, and Tom Steyer dropped out of the race and endorsed Biden.

As expected, the momentum swung toward Biden on Super Tuesday. Nobody would have expected that weeks ago, but after Buttigieg, Klobuchar, and Mike Bloomberg endorsing him, it is not a big surprise. Apparently, votes are not for sale and Bloomberg lost a lot of his reputation and money after his performances during the debate and on Super Tuesday.

Elizabeth Warren and Bloomberg seem to be out of the race and will take their consequences soon. I feel sorry for Warren, as she had a great campaign. Good news for her: She is “only” 70 years old. There are two more chances for her.

It boils down to two men who are 77 and 78 years old. They had been pushing their campaigns and relentlessly fought in the political arena for decades. Both of them have a lot of experience in attacking their opponents; they know all the rhetorical tricks and take no prisoners when it comes to debating.

One thing is for sure: whoever runs against Trump, it’s going to get dirty. Like it or not, this will become the most emotional and aggressive election of all times. Trump’s team can’t wait to start mudslinging against the Democrats. The country is divided, and this is a crucial point in modern American history.

Before Super Tuesday, the question was asked: Who can beat Trump?

Most voters are concerned about winning the general election—not so much about which type of Democrat is running. Democrats from Sanders to Bloomberg can agree that nobody wants four more years of Trump. What there is disagreement on is how to achieve that, and worries about Sanders being too progressive.

Sanders and Biden are both excellent at attacking Trump. Years ago, Biden stated that Trump was the kind of guy he would have beaten the heck out of behind the gym. Sanders does not miss a chance to call Trump the biggest threat to democracy. But it is not only about attacking—running against Trump requires a strong defence. Hillary Clinton knows a thing or two about that, and we have to take a look at how prepared Biden and Sanders are for getting attacked by “the Donald.”

What could the president use against them?

Looking at possible weaknesses of the two candidates, there is a difference that is easily overseen. Sanders was called a socialist for years; some even call him a communist nowadays. Trump likes to call him “Crazy Bernie,” because of his hairstyle and wild gesturing. Nothing new for Sanders, who already dealt with that four years ago.

Biden already attacked him for his controversial vote on gun law in 2005. Sanders has experience dealing with those accusations, as they are not new to him. His campaign team is probably already producing high-quality ads that explain the difference between Sanders’s plan and communism.

But Biden is facing different types of accusations. Alt-rights like to call him “Creepy Joe.” Searching these two words on Google leads to various pictures of him sniffing heads of babies and young women—that needs to change. I don’t say these accusations are appropriate or that he is a sexual predator, but Trump will. And then there is the whole controversy around his son, Hunter Biden, and the Ukraine affair, which has a bad taste to it. Biden reacts angrily when asked about that. Again, I won’t judge him on that, but Trump will.

Both candidates have weaknesses that Trump will try to use against them. Bernie has the advantage of being familiar with these talking points; Biden hasn’t proven that yet. He hasn’t found a way of addressing that and I think he needs to work on it.

The amount of possible damage Trump can do to Biden’s image is worrying me. Being called “Creepy Joe” for months could be tough. When a lie is repeated over and over again, some people will start believing it. Once people think about Hunter Biden’s job in the Ukraine and his dad being too touchy, it will be hard for Biden to stand his ground.

Sanders does not have that problem. Trump would call him a communist and interrupt every argument that Sanders will try to present during debates. It’s Sanders’s home territory: being under attack and explaining that he is not a communist. That’s all they’ve got against him.

Biden’s weaknesses can be used to make him look like a stereotypical political establishment guy. Meanwhile, Sanders is facing accusations of promising too much to his voters. There is a different quality about what Trump’s campaign will be able to use as an attack against him. But it is looking good for Biden at the moment; if Bloomberg drops out and starts supporting him, it will be hard for Sanders’ grassroots movement to compete with big money.

The thought that only a moderate candidate can beat Trump seems to take over the Democrats. But is that really the case? How did that go last time?

Taking that into consideration, Sanders looks like the more promising candidate. He has passionate supporters who want to see major changes happening. It’s hard to accuse Sanders of being a candidate for corporations or the Washington establishment. Biden, as a moderate, is popular amongst older voters, but can he really connect with young progressive Democrats and convince them he is one of them?

Beating Trump will not be easy. Democrats need to get a movement going that is even more determined than the Obama campaign. It won’t be enough to focus on getting rid of Trump and bashing him 24-7. In order to win the election, a vision is needed that sparks excitement in Democrats all across the nation. People who usually do not vote are the key to winning this election.

Sanders’s political revolution might be polarising, but it does not allow Trump to play his favourite role: presenting himself as the man of the working class against the establishment. Running against Sanders would force him to find a different focus and narrative. Biden as a moderate gives Trump the chance to repeat his strategy that he used against Clinton.

Clinton lost against Trump. He threw dirt at her, and unfortunately, it worked. She wasn’t able to defend herself. And I am afraid that Biden will have the same experience, as he seems too vulnerable on several talking points. But Sanders is a different type of candidate.

Maybe the Democrats should not repeat the mistake from last time and try something new. There is no need to be afraid.

Give Sanders a chance!

Why Bernie Can Win Bigger Than You Think. Please Vote, Even if it’s Not for Bernie. Congratulations President Trump!
See relevant Elephant Video