“History is Written by White Men for White Men”—Here’s how we Uncover the Silenced Voices.

Earlier today, @NASA announced that their headquarters will be named for Mary W. Jackson, the first Black female engineer at NASA. Jackson started with the NACA at Langley Research Center and was an advocate for women in STEM fields: https://t.co/idcfST1JnA pic.twitter.com/yBEZoF8acQ

The other day, I realised with horror that I have never read a psychotherapy book written by a Black woman—and I’m a psychotherapist.

As a white woman brought up in the U.K., a culture with colonial legacy, most of the books I have ever read were written by white men.

So when I went back to further my education in my late 20s and all the books were written by white men, did I even notice? No, I did not.

Don’t get me wrong, the books on the reading list were written by insightful, brilliant men who were seeking to understand the workings of the mind. It was new, unfettered territory which they explored, for the most part, with sensitivity. They were pioneers in their own way, often breaking down taboos, and I have benefited from their work and commitment in many ways.

But on reflection, I find myself questioning why so many of these books were written by men when 90 percent of the people reading them in my course were women.

Sadly, it reaffirms the nagging feeling inside that, perhaps, there might be other books that should have been written or were written and were not published.

It makes me wonder, pine even, after what I might be missing.

We know for a fact that many woman authors have been overlooked and their work has been dismissed in favour of men’s voices. We know that J.K. Rowling purposefully only included her initials as to not give away her gender, knowing full well that this is what it would take for her books not to be ignored at the publishing houses. We know that Watson and Crick were given the Nobel Prize for discovering DNA after using research by Rosalind Franklin. And anyone who watched “The Wife,” directed by Björn Runge and based on the novel written by Meg Wolitzer, knows in their bones that this story is just a template for what has been repeated over and over throughout our history.

History in the West, after all, is written by white men for white men.

As a culture, we perceive the white male perspective as the norm, whereas anyone else’s perspective—be it a woman or a person of colour—is always somehow marginal or considered “special interest.”

I was recently further disheartened when visiting the wonderful bookstore in the Tate Modern in London to discover that they had cornered off sections and labelled them “Women in Design” and “LGBTQ Art”—yet again confirming that the only mainstream perspective is that of a white man. While I was happy to see so many books written by diverse groups, the filter somehow smacked of segregation.

Perhaps I am too naive but I really would like to live in a world where the colour of someone’s skin, their gender, or their sexual orientation doesn’t necessarily define them as a person, nor the material they wish to write about.

So when I was trying to put together a reading list of psychotherapy books I could recommend to a friend, I realised quickly that none were written by people of colour. It dawned on me how much I must be—at least in part—the legacy of these pale-skinned men from yore. Their words live on through me and in my practice.

But where are the other voices I need in order to bring about a diverse range of perspectives? Why can’t I just as easily pick up a psychotherapy book written by a Black woman as I can all those written by men of European origin?

I have since set out in search of books that come from other worlds outside the prescribed mainstream—most specifically those that are penned by Black women.

It’s not easy. These books are not promoted by major hubs, like Amazon. You have to dig deep; it takes effort to break out of the system. And the system relies on you not having the time or resources to challenge it.

That’s when the existence of such a system becomes irrefutable.

All my life, my mentors—whether they were white or not, male or not—were all reading from the same script. The script that normalises white maleness as figures of authority, and which dismisses all other voices as “other.” Of course, within this system, there are the maverick teachers who bring awareness to the tilted scales and to whom I am grateful for inspiring me to question many presumptions, but they are, alas, still a minority.

This only highlights how much we need to question, especially if we are of European descent living within Western culture. So much bias has been normalised that this is exactly how we have come to understand it—the subconscious, collective agenda to elevate the white male voice above all others. We are so conditioned by this programming that even during my training, where the ratio of males to females was 1 to 30, guess who was the one to receive a distinction for their essay? The topic, the style, and the name of the author, together, tilted the scales favourably for him to be recognised above his female peers. Whether it was a man or a woman giving the grades wouldn’t have mattered, because we have all been conditioned to hear that particular tone as authoritative and without question.

Of course, not all white men think the same, feel the same, or live the same lives. Many white men suffer from the prescribed agenda as much as we all do by virtue of its non-inclusivity. I am not saying I do not want to hear from white men—quite the opposite is true. I want to hear them breaking the mould, listening to other voices, and questioning the status quo. I want us all in this together.

If we are to evolve and progress, we urgently need to keep questioning our default system and actively work against the grain to hear the silenced voices, so we can all benefit from larger perspectives and gain greater insight into the rich depths of the human condition across all its wonderful cultures and eras. 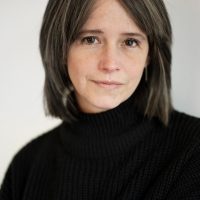 Eleanor Ferguson is a UK-qualified psychotherapist and counsellor from London, now working in Florence, It, and online. She holds an MA and Advanced Diploma in Integrative Psy… Read full bio

How Serving on a Grand Jury Opened my Eyes to the Reality of Systemic Racism. I am Black. This is what I Need (& what I Don’t) from White Allies. I’m a White Woman, raised in a Black City & I still have Racism within me.
See relevant Elephant Video