How finding a Pile of Photos of my Dad Healed Me. 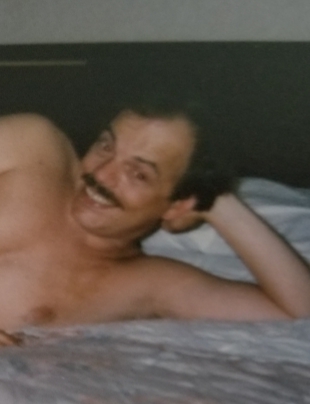 Today I saw my father’s penis for the first time.

His being deceased makes it all the more impressive, I suppose.

The weathered Blacks Photography envelope that contains his photo is labeled “Buffalo 1987.” It makes my dad 38 years old at the time.

During the last few months, I’ve been cleaning out my dad’s condo. He passed away after a short illness in the summer of 2017. My stepmother followed suit just two years later.

When COVID-19 hit, I found myself in a desperate housing situation. I was unable to earn an income in my career as a massage therapist, while I still needed to provide care for my son.

I was only able to come up with rent for the first few months of the crisis. Luckily, my stepmother left my sister and I the gift of her good friend Cathy, as the executor of her estate.

With Cathy’s help, I was able to arrange to live in my dad’s old condo to help ease my financial burden, as well as organize the condo for sale when the time of probate is over.

As I clean up and, sadly, discard most of my parents’ recorded memories, collections, clothing, and endless paperwork, I’ve been able to know them with greater intimacy than they allowed for in life.

My dad was a private man. Often, when I’m in the thick of shredding documents, I can hear him clear his throat before launching into an explanation over why he kept every notice that was ever stuck on his door by the condo corporation or why he always got his photos developed in duplicates. Neither of them would have liked this process, nor me heading the endeavour—I’m certain.

My stepmother was like room temperature in her warmest moments with me. She wasn’t that way with everyone, so I always sensed she had a particular distaste for me.

Maybe it was drawn from my frequent and loud laughter, joyful nature, and resemblance to my mom. But mostly, I suspect, it came from the fact that, as a child, I was my daddy’s girl. She was a woman who only had eyes for her one true love, and consciously or unconsciously, she made it difficult for my dad and I to prolong our special relationship after she moved in.

Their union impacted all of my dad’s most important relationships because of the priority it demanded. I now know how hard it was for my mom to watch us slowly disconnect with dad over the years. I know how much courage it took for my aunt to voice her concerns and subsequently be cut out of his life. I know it was my dad and stepmother against the world and all-in for each other.

Thankfully, I found evidence of their happy relationship all around me. Handwritten poetry dating back to the late 80s and moving forward through the years, cards, and letters.

The last poem I found was a welcome home note from a week-long trip my Dad took with his golfing buddies down to Akin, South Carolina annually, “The Rude Tour.” The first few lines expressed how much she missed him and how the condo was so quiet without him.

It ended in a catchy rhyming scheme: “My darling, it’s been such a long while. Please be waiting in bed, with nothing on but a smile.”

There was also a “contract” drawn up to declare what the winner of their fantasy football challenge would be entitled to. To spare the details of the arrangement, it was a nine-point contract book that ended by the loser preparing dinner and drinks, then breakfast of choice the next morning. This contract was stored with the poetry and love letters in dad’s nightstand. Her earliest notes to him were signed “The Brunette.”

So today, the photo, which is now in a garbage bag at the transfer station, will live on forever burned in my mind—I was not as shocked to discover it existed, as there was only one.

I sent my sister one of the pictures leading up to “the pic”—the one where our dad was posed across the bed wearing nothing but the purple velvet drawstring bag off a Crown Royal bottle. I wasn’t going to suffer the image alone—after all, I have a sibling for reasons such as these.

“Noooooooooo,” she replied. Then she said “Why?” followed closely by, “This is a work phone.”

Laughter and apologies later, she remarked what I had been thinking, “His smile in that picture, wow, that’s my takeaway. He was very happy.”

People always ask me when they find out where I’m living and what I’ve been up to these last few months whether it is sad and hard to be here.

I genuinely think that no: I’m better off having gone through the decades of photos and plucked out the ones that made me laugh or cry—ones I wanted to show my sister and my aunt. I smiled and even laughed outright over some small treasures I found.

I’m happy to have been the person to shred 30 years of precisely kept documents. I needed this time to reconnect with the man I knew so well, yet hardly at all. In many ways, I was healed by the process.

At 38, I find myself separated and in a new relationship as well. I can connect with my dad laying on that bed and smiling at his lover who took his photo. I can even relate to my young stepmother at the time who wanted to be with the man she loved, but didn’t know her place in his life and the lives of his children.

I better understand now that the failure in our bond was maybe in never making space for her and how in sharing one man’s time collectively, we set the stage for competition.

We never seized or created opportunities for any of the little moments it took to build trust—and trust is what it means to have a relationship with a child, such as showing up and being consistent.

At 38, I am proud of myself for being there for my stepmother’s final weeks in the hospital. For holding her hand and channeling any of my dad that I possess within me to be there for her. I complimented their love and how she was there for him. I repeated the things I heard her say to him during his final days, during hers.

At 38, my dad was in the throes of all life had to offer as well. Even though his relationship wasn’t great for me, but it was for him. They thoroughly enjoyed 30 years of loving the life they made together.

I’m grateful I got to catch a glimpse of it. I’m happy I stumbled across numerous sunset photos taken from the same balcony where I obsessively filled my Instagram feed.

I stumbled across decades worth of notebooks from the trips they took. All my dad’s clothes and belongings still taking up half of the space of their life years after his death—signs of how devastated she was to lose him.

At 38, I know what kind of relationship I want to model for my son. I know that loving me means loving him, and my understanding of love is that it never divides or subtracts—it multiplies.

At 38, I’ve found a relationship that lights me up, sparks my creativity, holds space, inspires some serious ghostbusting (a story for another time), and yes, even has me writing poetry. 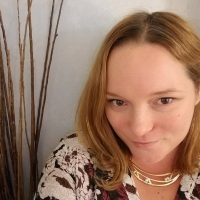 Cristen Hoyle‘s Dad taught her to love words and ideas. He was always recommending her next read as she grew. Now, she tries to teach her child the same love. She likes … Read full bio