I am a single parent approaching 40.

I am a business owner, entrepreneur, an active member of my community, and also lonely.

After a dating hiatus, my friends urged me to try various online platforms—to meet new people since my daily routines seemed to prevent me from meeting a partner in real life.

One evening, I uploaded my best photos to various swipe sites and worked on a genuine bio to go along with the photos. After staring at a blinking icon, all I could muster up was “Looking for a good human.” And I left it at that.

My photos were not suggestive in nature. In fact, I posted a few from my profession as a chef, some from the outdoors, and maybe one of me in a dress. (Most days, I’m entrenched in a kitchen and covered with food.)

I began swiping, looking for a people who seemed well-rounded, and not aiming for one-night stands, affairs, or other strange, seedy requests. I swiped right on a few potential matches and went to bed.

The next morning I awoke to several notifications on my phone—some of my swipes were swiped back. Conversations were started, dates were arranged, and I was off to the races to find my good human.

After filtering out men who seemed kind and forthright but just looking for a sexual encounter, I narrowed it down to a few good ones—I thought.

I began the exhausting expedition of meeting, cocktailing, and flirting with these potential matches. During my summer of swiping, I enjoyed rooftop dates, long walks by water, and a few trips to concerts and theaters.

After a few dates with men I considered to be “good humans,” an evening of romance and deep conversation often led to someone’s bedroom. I am a grown woman and capable of making adult decisions.

I quickly noticed something far from my previous real-life dating experiences a decade before I went online. I witnessed these partners, once behind bedroom doors, change into domineering and borderline abusive monsters.

It seems that sexual requests from these seemingly normal men are veering way out of our comfort zones. And for some reason—the need to please or a basic acceptance that sex now demands more of the female body—women participate in such acts naively rather than speaking up about personal boundaries and comfort.

We then wake the next morning, if we chose to stay, feeling utterly defeated, depleted, and unloved. We feel like an object.

I suppose pornography can be healthy to some extent. And I know it has been around for centuries. But from what I have seen, heard, and unfortunately experienced, it seems to be more dehumanizing than ever. And, to feel loved, accepted, and respected, many of us women give up our moral boundaries; we act out these scenes that are so readily available with a click of a button.

It is not news that many of those videos involve some form of drug use, human trafficking, or childhood abuse, leading the “actors” down a dark road for exposure, money, or fame. Or maybe they truly enjoy it.

I have talked to several of my peers on this issue. A handful of my friends have said they enjoy the slightly to purely painful acts requested by their partners. The majority of women I have spoken with have admitted to being completely uncomfortable with it; they acquiesce to please and (potentially) keep their partner satisfied.

Many of these men are upstanding citizens with good jobs, children, and appear to be the perfect portrayal of a partner (during the day). But behind the bedroom door, something changes. And we often find ourselves discarded once the act is over.

We begin to bargain, put off the uncomfortable requests, promise it for later; it becomes a game of what could be gotten away with; it’s a chase for more and more of our bodies and brains.

In my mind, I equated fulfilling these fantasies as a way to be loved, to be unique, and an active participant in their private lives.

What I found in my experience, and what many women I know will echo, is that we were giving more and more of our souls in hopes to catch the cosmic carrot: true, intimate connection.

“If I do this for him, maybe one day he will make true and passionate love to me.”

Instead, we slowly became an empty vessel. We make breakfast in hopes of an intimate exchange somewhere else outside of sex.

Near the end of my summer of swiping, I resolved myself to hold firm to my boundaries. I began informing them that I would like to foster a loving connection rather than the disconnect and discard I had experienced. I watched my options fade away, and ended up deleting all dating apps.

I had become an empty shell, and every man I met afterward, I looked at speculatively. I left the online world and began to see certain people outside of that seemingly deep, dark circle.

Many male friends I had met had propositioned for friends with benefits, and again I thought, “How can we be so disposable and disconnected with the most intimate act on Earth?”

How could people who seemingly respected me as a mother and career woman want only one thing—minus a mental connection? A few male and female friends would shrug and laugh when I would say, “I am done with casual experiences, and setting boundaries for myself.” And I get that—to a point.

“If you haven’t tried XYZ, how do you know you won’t like it?”

Because it f*cking hurts, that’s why.

Because my body does not bend that way.

Because I prefer a soft touch and to be treated like a woman rather than a disposable doll.

I am truly in fear for my children’s future involving intimacy as we have become so disposable—online and in the bedroom.

I was at a doctor’s appointment yesterday watching elderly husbands and wives push their partner’s wheelchairs into elevators, and I thought to myself, “With all this divorce, disposing of, and discard, who will be pushing this generation into elevators? Do we, as women or men, need to lose all sense of self-respect to keep and maintain a partner?”

I ended up joining a support group where the outcry is loud from women and men who feel they were used and put on a shelf because they could not please their partners. And I decided to write this as it has become overlooked in this patriarchal society.

This piece will not stop society from slithering down the endless sexual rabbit hole, but perhaps encourage those in compromising situations to know they are seen, heard, and felt. And perhaps create awareness—a new movement toward real and raw intimacy.

What does that look like? I have no idea; I have given up on searching.

But I have slowly built up the self-respect to say, “No,” and keep my soul intact. 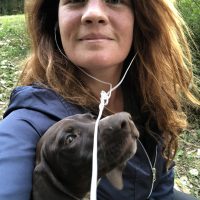 Quenby Schuyler is a writer, professional chef, and mother. Her goal is to bring the real and raw awareness that we often suppress, to the light and help people to step outsid… Read full bio

Marry a Man with these 8 Must-Have Qualities. 5 Ways to Get Intimate that Don’t Involve Having Sex. Dear Man who says he Wants Intimacy: Listen Up.
See relevant Elephant Video