Hope Begins in the Dark: Instructions on Life & Sobriety from Anne Lamott. 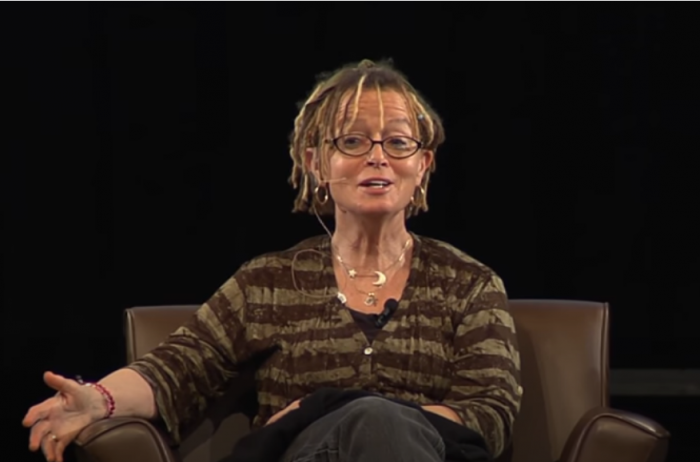 “I didn’t want to get sober, I didn’t like being around people who were,” said Anne Lamott in an interview with the New York Times.

“I knew I had a dark, secret life out there in the world, doing really weird stuff, and it was taking its toll on my soul.”

It was her best selling book, Bird by Bird, that first introduced me to the wildly popular Anne Lamott—it was given as a gift after I started writing about my issues resulting from codependency and being an Adult Child of an Alcoholic (ACA). Her mastery of the art of saying the unsayable paired with a singular wit immediately endeared her to me—and that was before I learned of her painful journey from alcoholism to sobriety.

She struggled at first, teaching tennis and cleaning houses to make a living—but was able to turn her writing career into a critical success.

But like so many of us, success wasn’t enough to hold off her demons.

At 32 years old, despite having three published books and a Guggenheim Fellowship to her name, she was drunk every day, broke, and struggling with an eating disorder.

“I was deteriorating faster than I could lower my standards. I was getting to the point where I was living in a way that involved waking up sick and with a lot of shame.”

She knew she needed help, and finally called a friend and asked, “What do I do?” Her friend, a recovering alcoholic, showed up 30 minutes later for a moment of courage that would change the direction of her life.

Her journey is filled with such authenticity and grace that it’s no surprise her vulnerable way of sharing her story has helped so many learn not only about recovery but about life as well:

“Lighthouses don’t go running all over an island looking for boats to save; they just stand there shining.”

“I think perfectionism is based on the obsessive belief that if you run carefully enough, hitting each stepping-stone just right, you won’t have to die. The truth is that you will die anyway and that a lot of people who aren’t even looking at their feet are going to do a whole lot better than you, and have a lot more fun while they’re doing it.”

“You own everything that happened to you. Tell your stories. If people wanted you to write warmly about them, they should have behaved better.”

“I do not understand the mystery of grace—only that it meets us where we are and does not leave us where it found us.”

“E.L. Doctorow said once said that ‘Writing a novel is like driving a car at night. You can see only as far as your headlights, but you can make the whole trip that way.’ You don’t have to see where you’re going, you don’t have to see your destination or everything you will pass along the way. You just have to see two or three feet ahead of you. This is right up there with the best advice on writing, or life, I have ever heard.”

“If your wife locks you out of the house, you don’t have a problem with your door.”

“Clutter and mess show us that life is being lived…Tidiness makes me think of held breath, of suspended animation…Perfectionism is a mean, frozen form of idealism, while messes are the artist’s true friend. What people somehow forgot to mention when we were children was that we need to make messes in order to find out who we are and why we are here.”

“Not forgiving is like drinking rat poison and then waiting for the rat to die.”

“If you want to make God laugh, tell her your plans.”

“Hope is not about proving anything. It’s about choosing to believe this one thing, that love is bigger than any grim, bleak shit anyone can throw at us.”

“’No’ is a complete sentence.”

“Thirty years ago my older brother, who was 10 years old at the time, was trying to get a report written on birds that he’d had three months to write, which was due the next day. We were out at our family cabin in Bolinas, and he was at the kitchen table close to tears, surrounded by binder paper and pencils and unopened books about birds, immobilized by the hugeness of the task ahead. Then my father sat down beside him put his arm around my brother’s shoulder, and said, ‘Bird by bird, buddy. Just take it bird by bird.’”

“Almost everything will work again if you unplug it for a few minutes, including you.”

”Hope begins in the dark, the stubborn hope that if you just show up and try to do the right thing, the dawn will come. You wait and watch work: you don’t give up.”

Bonus: Hanging Out with Anne Lamott

Alcoholism isn’t about Drinking too much: Alcoholism is about Pain. 11 Rumi Quotes for our Tired & Restless Souls. I wasn’t a “Problem Drinker” but Spontaneous Sobriety still Saved my Life.
See relevant Elephant Video