If Trump Remains in Power. 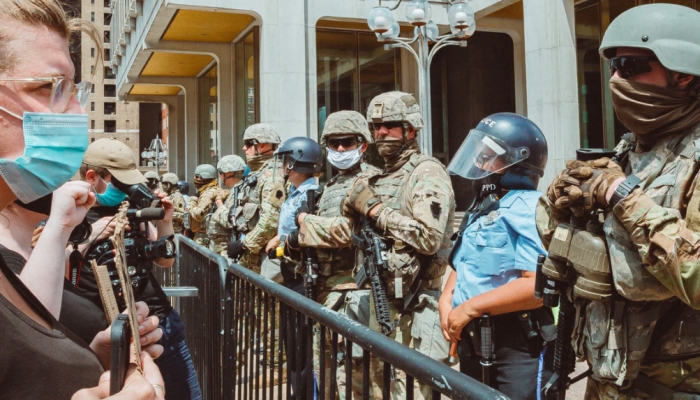 He will consolidate control at an increasing pace.

If Trump remains in power, the state will be increasingly modeled in his own image. Trump inherited a state apparatus staffed by bureaucrats, trained to operate under democratic institutions. Like most Americans, they believed in democracy, and they were resistant to authoritarianism. Many of his first team of advisors and cabinet officials also believed in democracy, and they resisted his most authoritarian commands. They resisted carrying out orders initiated through tweets and racist policies that offended their sensibilities. And when they resisted, they were supported by an array of prominent Republicans like Senators’ John McCain, Jeff Flake, and Bob Corker.

However, resistance within the Republican Party has almost wholly disappeared. Republicans who resisted were run from office, and they were attacked on social media and by friends, family, and business acquaintances. If you were not with Trump, Trump was against you, and so were his countless well-armed supporters, who would stop at little to ruin your life. If Trump has consolidated control, it is because he has been ruthless toward disloyal members of his own party, and this willingness to destroy internal dissent is characteristic of fascists everywhere.

When Trump first came to power, many argued he was not a fascist, for he was not opposed to democracy. Yet, since entering office, he has repeatedly lied about election results and the efficacy of voting by mail. He appointed a top-donor to run the postal service, which is essential to the next election, and supported him in slowing its services and removing its top administrators. He encouraged his supporters to vote twice, he has unconstitutionally called on law enforcement officials to guard polling places. And he has encouraged two rival states to interfere in our elections on his behalf while trying to coerce a third into falsifying charges against his leading opponent, for which he was impeached. Meanwhile, he has lauded virtually every major autocrat the world over, and he has attacked virtually every leader of a stable democracy, while repeatedly speaking about unconstitutionally staying in office for life.

If Trump respects democratic institutions, he has failed to demonstrate it in any way whatsoever.

People also said he was not a fascist because he did not engage in extralegal violence. This was not true, as he was telling his supporters at the time that he would pay their legal fees if they beat up protesters. He also made veiled threats of an insurrection if the general election was stolen while lying about the millions of undocumented Mexicans who voted illegally. Since being elected, he has praised white nationalists in Charlotte, one of which killed a protester, and defended the Kenosha killer after he murdered two protesters. He has encouraged well-armed protesters to storm the legislatures of several swing states. He has created his own private army out of the most sadistic border patrol agencies and used them to occupy a major city against the strong protestations of its elected officials. And he has declared through the sharing of a video that “the only good Democrat’s a dead Democrat.”

If Trump has not done more to undermine democratic institutions and employ extralegal violence, it is because he has encountered so much resistance. Yet, if Trump remains in power, as we have seen, we should expect the resistance to dissipate at an ever-faster rate. But since many of his supporters want nothing more than to bully others, we should also expect his followers to become more abusive as they become more powerful. And as his followers become more abusive, as he ignores Congress and the courts, and as his private militia grows larger, we may see the flowering of a fully fascist state.

America is not yet a fascist state. Rather, we have a fascist leader with a fascist following, who has taken over an increasingly fascist party, while presiding over a largely fascist administration. But administrations change with elections, so the state itself remains largely democratic. While Trump has succeeded in putting loyalists at the head of several agencies, the government itself possesses over 1.5 million employees. Fascist Germany and Italy were smaller and less wealthy, and states at the time were nowhere near the size of states today. This made it easier to consolidate control, but it was also easier because they had weaker democratic traditions.

America possesses one of the largest states ever in the history of the world because of its wealth and population, and it is the oldest democratic state in the world. It will be hard to find loyalists to staff its bureaus, and it will take time to impact the minutiae of their regulations. Thus, the economist Tyler Cowen suggests, in an ironic retort to libertarians, that it is precisely the vastness of the government that will preserve our freedoms.

And if the number of former officials who have written memoirs blasting Trump is any indication, there are countless supporters just waiting for the chance to hang him by a lamppost, as the Italians did to Mussolini. Hence, if his approval ratings ever dip below around 36 percent, critics will begin to crawl out of the woodworks, and at that point, his favorability ratings are likely to plunge downward and never recover.

So, while Trump might consolidate power at an ever-faster rate if he remains in office, it does not mean all hope is lost, only that resistance will become ever-more dependent on the stalling tactics of bureaucrats and the disillusionment of his supporters. This might be helped along by general strikes and social discord, quite possibly civil war. But if Trump remains in power, there is no telling how long he will remain, and the likely end will be social collapse.

Perhaps there are no more ways left to say you should vote like your life depends on it and do everything in your power to defend the integrity of our elections, but if Trump remains in power, we will no doubt wonder why we did not do more to prevent it.