Trump’s Supreme Court Nominee Must be Stopped—By Any Means Necessary. 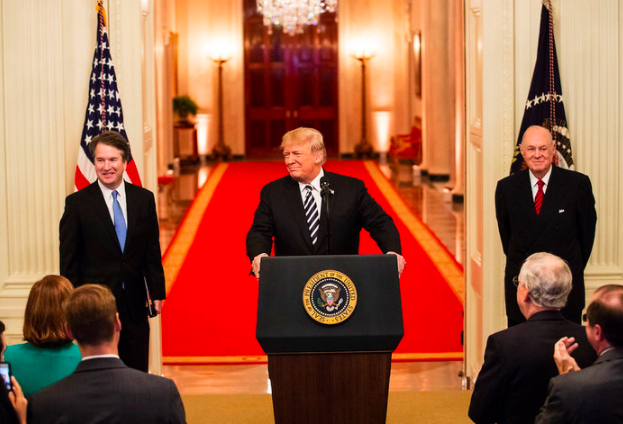 Trump’s appointee must be stopped by any means necessary.

Former Secretary of State John Kerry reports in his autobiography that on election night 2004, the Democratic Party leadership got together and agreed the presidency was being stolen in the pivotal swing state of Ohio. Voters reported that polling machines were switching their votes from Kerry to Bush. There were endless waits at polling places in Democratic districts, with many closing early and several thousand not being able to vote. Meanwhile, exit polls placed Kerry tens of thousands of votes ahead of Bush in Ohio. However, the leadership decided not to contest the election, according to Kerry, because it would divide the country, and the Supreme Court would just decide in favor of Bush in another partisan decision.

The question of whether the election was actually stolen remains controversial. At a minimum, there were multiple and significant irregularities. But the dilemma of the Democratic Party leadership, and the fact that so many Americans know nothing about it, highlights how easy it would be for Trump to steal the election. Republicans need only limit access to key polling places in swing states they control. They can also tamper with voting machines, allow Russian hackers to do it for them, send armed supporters to minority districts to intimidate voters, refuse to count ballots that arrive after Trump has declared victory on election night, or throw up roadblocks to voting by mail. All told, there are countless ways to steal an election, most of which are hard to prove.

Most recently, we have seen Republicans strategizing about using the electoral college to steal the presidency. Most states allow parties to choose their electors at their national conventions, assuring that if their candidate wins, the electors they have chosen will vote for them. But the Trump administration is considering pressuring swing state legislatures, most of which are Republican, to retroactively change their laws, allowing them to send Trump loyalists to the electoral convention regardless of who wins. Democrat governors might try to do the same in response, but this would simply send it to the Supreme Court—and no one should expect them to defend democracy.

After watching Republican-appointed justices refuse to allow a recount of ballots in Florida in the presidential election in 2000—which would have included ballots where the intention of voters was clear, thereby handing the presidency to Gore—the Democratic leadership, according to Kerry, saw no hope that the court would arbitrate fairly in 2004. And yet, the Republican-appointed justices in 2004 were a model of judicial restraint and decency compared with those who sit on the court today. Three of them are likely to have been appointed by arguably the most authoritarian president in American history. And not a single one of them has voiced reservations about the theft of a seat that is occurring before our eyes.

The problem is not simply with the questionable legitimacy of their seats on the bench but their assault on democracy as well.

The American political system changed overnight in 2011, when Republican-appointed justices voted to strike down the McCain-Feingold campaign finance reform law in Citizens United, thereby opening elections to a flood of cash. While their decision may not have benefitted Republicans over Democrats, most commentators at the time expected it to, and it transformed a weak democracy into what all too often now appears an oligarchy. It bolstered the chances of candidates like Michael Bloomberg and Donald Trump by removing limits on personal spending in campaigns, and it led both parties to cater ever more to their wealthiest donors.

The court struck down the 1965 Voting Rights Act in 2013, leading to a string of cases in which Republican-controlled states threw up roadblocks to voting in minority districts and disenfranchised many millions of people of color. Yet the court also made it easier to gerrymander districts, a method of engineering safe congressional seats practiced by both parties but far more egregiously by Republicans. The Brennan Center for Justice has concluded that gerrymandering has allowed Republicans to pick up at least 16 extra seats in the House of Representatives. Together, the voter suppression and gerrymandering facilitated by the court has quite possibly contributed to dozens of extra Republican seats in the House.

The court’s history of shaping an electoral environment favorable to Republicans, while subverting democracy, raises the question of why we don’t simply declare it a clear and present danger to the constitution. Republican appointees to the bench have played a leading role in subverting democracy in every major branch of government, and with such a large majority as they are likely to see after Justice Ginsburg is replaced, it will only get worse.

It is time we stopped treating the court as a hallowed institution protecting democracy and begin instead to speak of it as a partisan weapon. We can begin by ostracizing the justices who have been assaulting our democratic institutions. And we can establish a principle that when their decisions subvert democracy, whenever possible they will not be respected. We should explore impeaching at least one of them and if that is not possible expanding the court by at least one seat.

In the meantime, we need to stop the seating of Trump’s nominee by any means necessary, if only to demonstrate the fight we will put up when they try to steal the election.

If Trump Remains in Power. The Spirit of Democracy Can Save This Country. So many good quotes in Joe Biden’s speech on The Supreme Court & Justice RBG, today.
See relevant Elephant Video