To the Woman who is Being Abused: You are Strong.

He hits you, but you don’t say anything.

He calls you names and belittles you, but you don’t say anything.

He keeps you from the things and the people you love, but you don’t say anything.

He tells you what to wear and how long to keep your hair and won’t let you have any money of your own or put on makeup, but you don’t say anything.

You think that someday he’ll stop.

You think that someday things will be better—when the kids are older and aren’t so needy, when money isn’t so tight, or when his job isn’t so demanding.

He just gets overwhelmed—he is just stressed.

These are the things you tell yourself as you hide the bruises. This is what you tell yourself at night when everyone else is asleep, and you lie awake wondering what has become of the love that has brought you to where you are now.

You wonder where is the woman you used to be—the strong, independent woman who took no sh*t from anyone. She has disappeared, and now a meek and quiet woman who does as she is told has replaced her.

What if one day your son’s girlfriend or wife comes to you and tells you he beat the sh*t out of her.

What if one day your daughter stops coming to see you or stops calling you, and you find out the guy she’s with won’t bring her over, or he won’t let her have a phone?

What if your children grow up to think that this is the norm?

You think that he’s just doing it to you. He only hits you, and he only yells at you. It doesn’t affect anyone else, and someday, he’ll stop being so mean and things will be good again—you’ll laugh and joke like you used to, and he’ll do nice things for you again.

First off, what he does to you absolutely affects everyone around you.

Your parents, friends, and other loved ones see the change in you. Your children see how he treats you—or how he doesn’t. Those kids see and hear everything, even if you don’t know it. They take it all in. It shapes them into the adults they will become.

Most importantly, money and circumstances will not change a damn thing. I hate to be the bearer of bad news, but nothing is going to change. No matter where he works, how much money you have, or if the kids are grown, he is still going to treat you the way that he has been.

And I get it. I’m not judging you for where you are in life right now because I’ve been there, too.

It creeps up, doesn’t it? The little changes in how he treats you creep in slowly. At first, it comes off as concern.

He worries about you if you go out without him.

You should stay home with the kids instead of working to save money.

Are you trying to look good for someone else by dressing nice or taking time to look presentable?

And when he hits you for the first time, you barely even notice because it’s been building up to this. He has brought your confidence down so much that it’s not even that big of a deal.

Suddenly though, you realize that he isn’t concerned about your well-being—you are being controlled. He doesn’t love you; someone who loves you would never hit you and call you names.

You sit there wondering what in the actual f*ck happened. You wonder how you could allow someone to treat you the way he does. Never in your life did you think that you would be where you are now.

But here you are, and how exactly do you get out?

You have kids, you don’t have any money, and my God, what will people say?

So instead of getting out, you deal with it. Because maybe—just maybe—someday he’ll stop.

Or even worse, you think you deserve to be treated the way that he treats you. Maybe he’s brainwashed you to think you are not worthy of being treated well.

I can put myself in your shoes because I have been there. Everyone says, “Why didn’t she just leave?”

It’s not easy to walk away. He has dragged you down so far that you don’t know how to get out of where you are—mentally, emotionally, and physically. It is a feat that takes a great deal of strength.

I’m not here to tell you that you are weak or that you are less because this has happened to you. You would be surprised to know how many women have been, or even currently are, where you are right now, thinking that they can’t survive without him and that they aren’t worth a damn.

I am here to tell you that I believe in you.

I am here to tell you that you absolutely can get out of the situation you are in.

You are beautiful and valuable beyond measure.

And my beautiful and valuable friend, you are strong as f*ck.

You can do this. 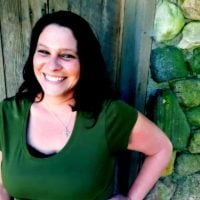 Amber Elizardo is a full time working single mother of two boys, blog and content writer in her spare time, and on occasion has time to explore other hobbies—reading, garden… Read full bio