It is Time to Start Naming Trump’s Crimes. 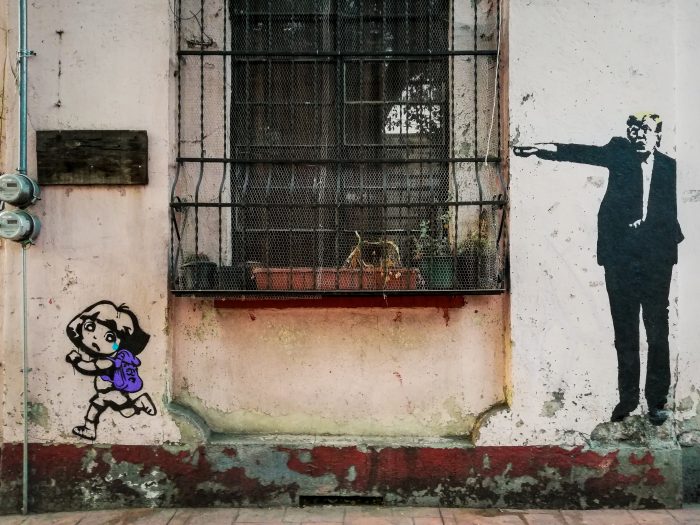 ~ Excerpted from The Fascism This Time: and the Global Future of Democracy

And drop the euphemisms we used to make life bearable under a tyrant.

There is a lot that we failed to name over the past four years. We might have called the border patrol agents attacking protesters in Portland a private army of the president and their deployment against the wishes of local elected leaders an occupation. We might have called the “child separations” engaged in at their facilities crimes against humanity and the mass hysterectomies carried out at one of their facilities an act of genocide. Yet, time and again we failed to call them by their true names.

We pretended things were not so bad in order to get on with our lives, but the more salient language also sounded extreme. Liberals worried about losing the center, but they were also shying away from a fight. So, journalistic standards of fairness and political norms of propriety conspired to flood us with a vacuous stream of euphemisms. We called lies “misstatements of fact,” concentration camps “holding facilities,” and the starvation of millions in Yemen “war crimes,” instead of the more chilling and descriptive genocide.

With all of the talk of liberals suffering from “Trump Derangement Syndrome,” we somehow failed to recognize that the things we were seeing were not just uncivil but often deranged. In our failure to face reality, we minimized the horrors and downplayed the threats. The result was an endless sense of astonishment and a queasy feeling of alienation.

We were surprised because we had been telling ourselves things were not so bad, alienated because we had been living a lie. And at times the veil we drew was so thick we were simply blinded. How else to explain the virtual silence over a president bragging about making billions in arms sales to a Saudi regime that was deliberately using them to starve millions of children?

The process started many years ago when liberals began cultivating a smug sense of self-satisfaction in the face of right-wing hate. No need to debate them on social media, because “haters gonna hate”; no need to worry about the movement claiming your Black president is a foreign-born Muslim, for no one will take them seriously. We convinced ourselves that anger cannot bring about change, so the haters were wasting their breath, and our indignation and resistance were therefore intemperate.

So, when they stole the Supreme Court in their unprecedented refusal to even grant Merrick Garland a hearing, we simply let it go. And we did the same when they filibustered legislation, gerrymandered districts, and talked about assassinating our leaders. We let it go because we had convinced ourselves that reason and truth always win over anger and lies; and we let it go because we told ourselves things weren’t so bad. Still, the problem was not simply that we were not calling things by their true names, for even when we did the language we used tended to inspire inaction.

A “deliberate misstatement of facts” is the exact same thing as a lie, but lies are universally condemned as immoral. And “hate speech” might be the same as racial incitement, but incitement is cause for alarm and punishable by law. And when the words are set in a moral framework, calling things by their true names not only inspires action but is an action in itself, like the boy who disrobes the emperor by saying he is wearing no clothes.

The linguistic philosopher J.L. Austin identified a strange species of what he called performative statements, which are highly relevant in this regard. Making a vow or committing to marriage cannot be verified as true or false, for instance; rather, the declarations themselves are actions, for in making the declaration, the action is completed. Austin limited this class of statements to those with clear consequences, but it can also be applied more broadly, as in the case of the congresswoman calling for impeachment. In calling for impeachment, she is both making a statement and initiating a process. In this sense, speaking truth to power is no mere intellectual exercise, but it is all the more powerful when implicit in the truth-speaking is the call to act and do what’s right.

This sort of thing tends to make liberals uncomfortable. The linguist George Lakoff suggests that liberals tend to speak the language of the enlightenment, laying out the facts in neutral terms—but conservatives speak the language of marketing, moving listeners to act. Liberals tend to believe that in speaking objectively, they can initiate a debate in which reason will win. Yet, it is seldom like that in real life, where words always tell emotional stories, which move our hearts and guide our actions.

Consider what it means to describe Trump as a tyrant. Everyone knows how tyrants behave and the damage they can do because we have seen what happens when they head up nations and families. Tyrants try to control others but are not in control of themselves. As a result, their projects tend to end in disaster. Hence, by calling Trump a tyrant, we are not just describing his character but pointing the way to what needs to be done.

It is much the same when we call him a bully. Everyone knows how bullies behave because most of us have been bullied. We know they play dirty and make things up, and they tend to be weak inside and fall apart when stood up to. This is because their strength is based on an illusion. Hence, in labeling Trump a bully, we are not just describing him but implying what to do. And what can be said of tyrants and bullies might also be said of liars and cheats.

The tyrant and bully labels describe Trump accurately but they also suggest a course of action. Labeling him a fascist who is putting kids in concentration camps, while starving millions more in Yemen, tells a story about the devastation to which his administration is heading. If the labels are not right, the narrative will not make sense; if the narrative doesn’t make sense, the inspiration to action will fail to materialize; if the inspiration to action fails to materialize, the cause will be lost and ruin will ensue.

But right now, it is important that we each make a single statement through the performative speech of voting. Through the simple act of voting, we can say no to all of it, and in so doing we can begin to reestablish the common basis of truth through which democratic societies debate their future. And what a relief it will be to transform a constant fight over lies and hate into a reasoned discussion over what matters most.

Progressives have a lot to say on the matter, as do moderates and conservatives. And what a relief it would be to remove the tyrant so we can get down to the simple act of talking it out.

If you liked this article, please check out the book from which it is a revised excerpt, The Fascism This Time: and the Global Future of Democracy ~ Theo Horesh

Every Vote is a Celebration of Freedom. America’s Shadow: The 2020 Presidential Election. The Last Gasp of a Drowning Man.
See relevant Elephant Video