The Astonishing Relief of a Decisive Blue Tsunami. 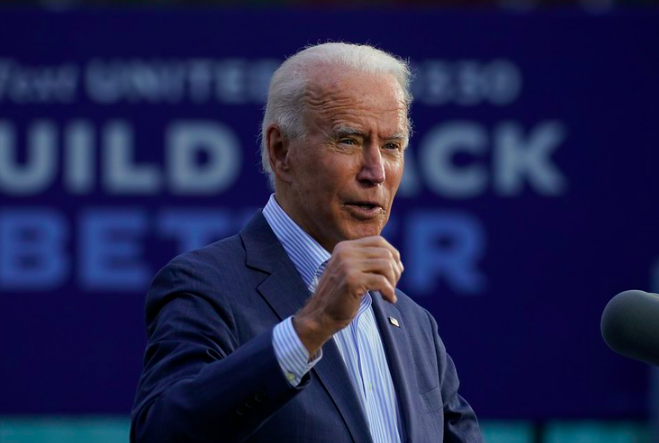 Biden’s victory would allow everyone to finally take a breather.

Imagine an entire country and much of the world breathing a great collective sigh of relief. It is almost certainly what hundreds of millions, if not billions, of people the world over, will do if Joseph Biden Jr. is decisively elected president of the most powerful state in the world, with a clear majority in congress and the senate—but it is astonishing how seldom it is discussed.

Setting aside the relief it would bring to liberals and minorities, who have been under assault for the past four years, his election would end the daily drama, reduce the polarization, restore a sense of order and national historic continuity, and pull the country back from the brink of civil war.

The most dedicated Trump supporters would stop having to justify his lies to friends and family and could finally get back to living a normal life. The most dedicated resisters could finally take a vacation, expand their horizons, and start to work on the great global challenges of the 21st century. And the people in the middle whose political engagement ends when they drop their vote in the ballot box could finally escape the social and political maelstrom. The last four years have been chaotic, intense, and exhausting—for everyone. They have seen families torn apart, communities ripped asunder, national institutions disparaged, and unprecedented threats to democracy.

But the sense of relief that many imagine occurring upon Biden’s decisive victory goes much deeper than mere quietude.

Biden would enter the presidency having spent more time in elected office than any first-term president since James Buchanan in 1856. Hence, he would bring to the presidency a deeper appreciation for the norms and institutions required to make democracy work. And he would bring a realistic sense of what is needed to get things done along with a lifetime of experience working with the people who know how to do it. Thus, we could relax in knowing that the daily minutiae of keeping a nation of over three hundred million people functioning are being tended to by experts.

Since government pervades our lives, its effective management impacts us more deeply than we tend to imagine. It impacts the healthcare we receive, the cost of our energy, the livability of our cities, the safety of our cars, the wages of our work, our access to nature, and the way our children are educated. Many of these functions involve moral choices made in the process of crafting laws that few citizens have thought about. Many simply require expert management. Yet, in both cases, it is easier to relax when the people in charge are decent, competent, and experienced.

Biden is a moderate who has made countless compromises in order to remain in office and make incremental changes on the issues he deems important. Hence, it is no surprise that progressives would be disappointed by his nomination or that an electorate ready to tear each other apart would find him uninspiring. In complex societies in which multiple visions of the good life compete for attention, moderation is usually needed to pass major legislation, maintain social harmony, and preserve democratic institutions—but it is often quite messy.

While Biden appears increasingly sensitized to the perennial challenge of racial discrimination, he has not taken many stands for justice over the course of his career. And he lacks the brilliance of President Obama, so we should not expect him to dazzle us with his subtle reasoning and soaring prose. But his platform commits him to curtail inequality through a $15 an hour minimum wage, expand access to health care for the poor, and provide two years free tuition at community colleges. He is committed to spending over a trillion dollars in the fight against climate change. And he is a committed defender of democratic institutions and the international alliance of democracies, which are essential to our freedom and the future of civilization.

Progressives who are skeptical of the good he might accomplish should take a look at his platform and consider that the same forces that got him to take up these positions could challenge him to implement them as well. It is an extraordinarily progressive wish list that is all more incredible for its ability to maintain the support of more conservative allies. Trump’s abuses of power, coupled with rising inequality, have led many of them to reconsider everything. Dismissing their support when so many of their views have been shaken to the core would be a major strategic blunder.

In addition to his time as Vice President, Biden spent decades on the Senate Foreign Relations Committee. Hence, he knows our allies well, is versed in foreign affairs, and would bring to the job a desperately needed dedication to democracy and international institutions. Anyone who prefers to live in a world in which tyranny and human rights abuses are shunned and developed democracies work together to solve big global challenges like climate change could finally rest assured.

Like most presidents, Biden’s support for democracy and human rights would not be perfect, and his support for Israeli human rights abuses has been shameful. But good leadership is often as much the result of pressure from below as it is wisdom from above. It is hard to imagine Biden leading the country into a major war when the other party wants to sabotage his agenda and his own refuse to support it.

Biden would make improvements on all these fronts, quietly, through technocratic management of government bureaucracies, democratically, through the only major party left that respects our institutions, and incrementally, as he moderates between two highly moral forces of change—Republicans who refuse to support the fascism of their own party and progressives who refuse to countenance the corporatism of their own.

It is an alliance that was always bound to be rambunctious in a country torn apart at its seams, but while Biden may inspire few passions, he possesses the qualities and experience to muddle through with decency, empathy, tolerance, and if we are lucky, and we play our cards right, maybe just a little grace. His decisive victory, riding a blue tsunami, which sets legal challenges to rest, would bring an astonishing sense of relief.

As for the rest—we will live to fight another day.