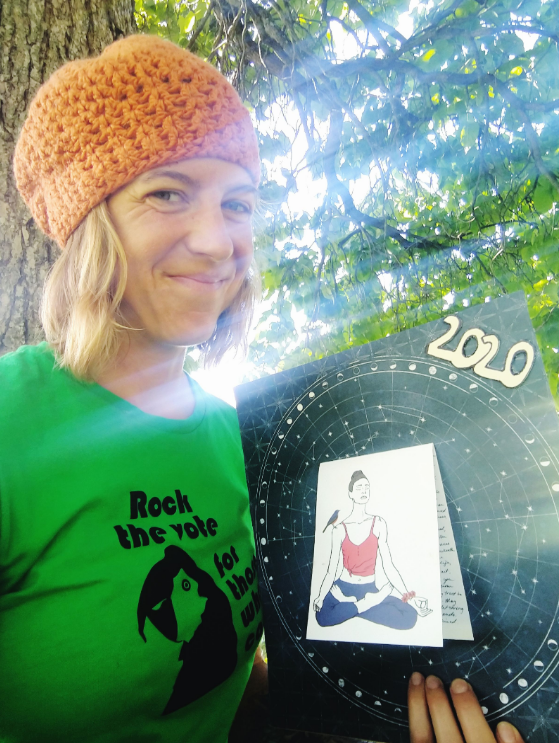 That’s how I ended the manifesto I wrote at the end of 2019—my vision, not for how 2020 would go so much as the spirit of how I wanted to embrace whatever came.

For who among us could foresee what this year would bring to our homes, communities, businesses, schools, relationships, economies, governments, and Earth herself?

It’s been a year of fire, pandemic, isolation, death, white supremacists, police brutality, economic depression, storms, political circus acts and an ever-worsening climate crisis, to name a few. We’ve all felt this collectively, even as we weather it all on our own private islands.

I reread my manifesto recently and sat stunned by the things I wrote that, in a circuitous way, are now coming to pass.

“If ever there has been a year to dig in, root down and hang on—this will be it. The winds are coming, the Earth’s tremors rumbling, the seas rising; but I, also, am blowing, tremoring, rising.

This year, I continue in my employ of the Earth, honing my focus, watering and tending my seeds of intention, open to new opportunities and abundance, stepping beyond my comfort zone and limiting beliefs.”

When I wrote these words, I imagined myself where I was at the time—in the farthest northern corner of Washington, married, finally finding my place within a local community of activists, and hopefully employed in outdoor conservation work.

If someone would have told me then that this would be the year I leave my marriage, move to New York in the midst of a pandemic with a near stranger, go through a second breakup a few months later, and find my way to a farm sanctuary in Vermont and work as a duck caretaker, I would have choked.

It’s best not to know ahead of time, right?

It’s been a year of some of the hardest goodbyes I’ve ever said; a year of liberating myself and learning on a deeper level what I’m made of.

It’s been a year of seeing that I’m no longer willing to remain in unequal relationships where my needs are neglected; a year of no longer taking bullsh*t from people who claim to love me; a year of staring down my fears, limiting beliefs, and running straight toward them; a year of being more physically alone than I’ve ever been, yet beautifully accompanied from a distance by a host of friends.

It’s been a year of watching in wonder as provision comes rolling in, in generous waves.

Instead of being married, I’m single for the first time in over a decade, getting to know myself anew.

Instead of  living where I used to live, surrounded by all that is familiar, I’m living on 1,300 acres of mostly wild land in one of the most stunning states in the country.

My “employ of the Earth” is learning to be a steward of this land and a good neighbor of the wild ones we share it with, including caring for a flock of rescued ducks who are working partners on the farm.

My “community of people” are a tiny sanctuary team of dedicated vegans and animal advocates who live their activism in a hundred different, daily gestures.

For a good chunk of this year, I had to shake my head and concede that I did not travel in the direction I had envisioned with my seeds of intention. Little did I know, it was a twisty trail that would eventually lead me somewhere those seeds could begin to crack open.

We never know when we embark on one path how it might branch off, segue, or dump us into another path we couldn’t see from where we began. We never know how one ending may reveal a door to a place we’ve only dreamed of.

I had to pass through heartbreak—several times—to get here. And here may not be a destination necessarily but a respite and a classroom along the way.

The story is forever unfolding.

I had to choose listening to my inner knowing above the voices of everyone else. I had to be willing to take huge risks—to fall in a spectacular fashion if need be—to forge my own path. I had to believe in my worthiness and the worthiness of my heart’s freedom, in order to keep going. I had to trust that there was abundance and provision when I could see none for miles.

I had to refuse to turn back.

If there’s anything I can impart to you on your own island, finishing out this difficult year, it’s this: you never know when you ask for something how it may come to you, packaged so differently than you ever imagined.

I’m beginning to believe that life bends toward us when we dare to ask for and imagine the impossible. Things will not often be handed to us, but there will be openings that surprise us when we persist, and we will find ourselves accompanied in ways that feed our spirits and send us out into the world.

But don’t take my word for it—test it for yourself.

May you, too, find yourself at some point on a path, stunned by what has opened to you and how far you were willing to travel to get there.

Happiness Is A Journey, Not A Destination. If You don’t Ask for What You Want—You’ll Never get It. 8 Quotes to Inspire New Beginnings.
See relevant Elephant Video