I Gave up Christmas for a Month of Solstice & This is What Happened. 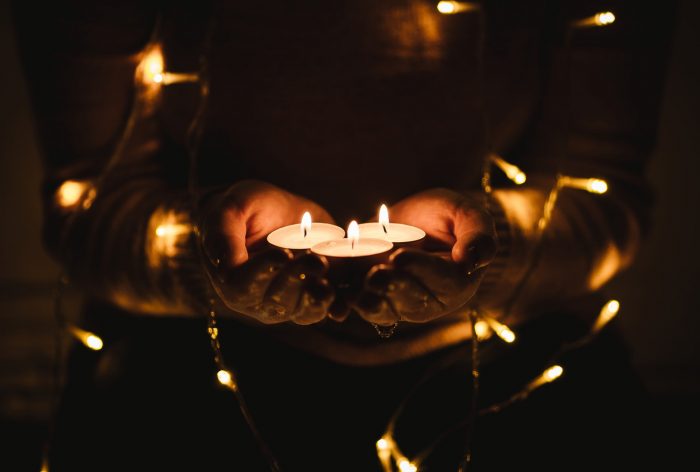 What are your thoughts about Christmas, especially this year?

In speaking with friends and family, it’s been sort of like this…

“I’m done with it! It’s depressing and I’m always broke in December.”

“Not doing it…wish there was another way. I love the lights and the tree and the family but not the commercialism.”

Well, there is another way! I gave up Christmas for Solstice and it’s completely satisfying my urge for all those nourishing things Christmas promises.

I come from a Catholic family, so you may be able to imagine the importance placed on Christmas day. Celebrating the birth of Jesus ranked lower in my child’s mind than say…celebrating mine. I also wondered how the whole world seemed to participate in a Christian holiday no matter their culture or religion. There were loads of pestering questions for my parents.

What I appreciated about Christmas then was the implied mystery, the baking, the colors, picking out the perfect tree, decorating the house. I realized later that it was ritual that appealed to me.

Now, having defected through personal revolution to more pagan ways, I find a deep sensory connection to all those same things, but enjoy it over a “Winter Solstice Season.”

Why not celebrate all the good things for a month, instead of a few frantic days? Who can possibly get all those shenanigans into less than a month, I ask? Is November 22nd when the sun migrates into the sign of Sagittarius too soon to begin? I think not! From then to Winter Solstice, marks the month of my preparations and observations.

Winter Solstice, or Alban, for Pagans of Celtic/Druidic ancestry and anyone practicing earth-based spirituality, is the rebirth of light and hope, as December 21st is the shortest and darkest day of the year—after which the next three days are generally the focus of festive revelries.

At this time, we leave old issues behind and resolve to face the lengthening days, having turned our face to the sun.

Celts (in case you’re wondering whether that may have ancestrally included your folk) were Indo-European-Anatolian tribes who shared similar culture and beliefs and later spread to areas such as Britain, Spain, and Switzerland. The biggest misconception is that the Celtic tribes originated in Ireland, Scotland, or Wales. What is true, and thankfully so, is that the language and culture of the Celts managed to survive in the British Isles after Roman rule, and domination pushed Celtic spiritual beliefs underground there and everywhere else. Dig around a bit in your roots, you may find some Celtic cultural and spiritual treasures that you never knew existed.

My tribe/clan comes from Poland, a place of many witches, ironically, even though Catholicism is practiced by approximately 87 percent of the population. Roman conquerors notwithstanding, there survived a strong tradition of mysticism. And that’s what my adult heart rediscovered when exploring earth-based spirituality.

Getting back to our cultural roots is more important than ever—to decolonize our belief systems. We’re all from somewhere, belong to some ancient tribe; we all have strong traditions that belong to us.

What I love about earth-based spirituality is that it honors natural cycles, the earth, woman, and a balance of masculine and feminine energies. I can be one with myself, with my environment, and others because everything and the every day is sacred.

Solstice season brings us close to the shadows of our psyche and soul, as darker days inspire us to turn inward. Introspective, we can slow down, then slow down some more.

The mad rush of Christmas is an unnatural energy when the soul is looking to burrow and surrender. A “season” allows for unfolding, enjoying, and absorbing.

When I began this practice of observing the descent into darkness, I found myself at peace with the season. I looked forward to the unhurried rituals of decorating, baking, and planning get-togethers—because I had days and days, and they did not culminate in Boxing Day let-down. The three days of December 21st through the 24th became a container for sensing intuitively into the change of light upon the land. I was brought into balance with myself, as once more, I expanded.

Put up a Solstice Tree.

A Solstice tree can be indoors or out. If outdoors, and you happen to have a tree in your garden, it can be festooned with all kinds of treats for birds and squirrels. (If you begin feeding in the winter, please continue until spring, while the temperatures and food stores are at their lowest.)

A Solstice tree is a celebration of you, your family, natural elements, and whimsical decorations.

A few years ago, I opted for an artificial tree to save one from being cut down, but missing the scent and beauty of fresh fir, I cut branches closer to Solstice and put up in vases and on the mantle.

My tree stays up until the second week of January, just because I love my wizards and mice so much!

In a world of fast everything, email and text, it is delicious to send and receive an actual card or letter in the mail, with handwritten sentiments. This is one time of the year to spend an evening with our thoughts and a hot cup of something, writing our honest words to someone we love. Try it. It’s actually magical.

2020 has been the year of baking! I even learned how to bake gluten-free sourdough bread, and it’s not mealy or dry either! Why not take a few evenings to bake deliciousness for the body and soul? It’s a meditation, really, to pick out ingredients, compose a recipe, wait for the finished cookies and cakes. This year I’m trying Stollen!

Remember those long evenings of crafting? A lot of that time, which used to be for decompressing from a days work, is now allotted to Netflix, or, we just keep on working in some fashion. I think that allowing ourselves the time to participate in something creative in the evenings is incredibly calming for the mind. So whatever calls to you, painting, knitting, writing stories, making decorations for your tree, beading, sewing—this is the season! My newest (old) pastime is to put on the radio (erm, podcast), and craft while I listen. I know it sounds terribly old-fashioned, but by bedtime, my brain has completely decompressed; I’ve learned something while my hands have been rhythmically creating.

Create an altar with these elements, and light when meditating, praying, or connecting with ancestors.

The rituals at Solstice are meant for releasing and banishing, attracting abundance for the year ahead, for supporting the elders in the family, and looking forward to increased sunshine.

Spend plenty of time in the wilderness, such as you can find near you, or a day trip away. If you have a little cauldron, or in a bonfire, burn oak, holly, pine and rosemary; embrace the fragrance and think of one you hold dear to your heart.

As Solstice eve approaches, light a wide candle and burn herbs or small threads in it, representing all you wish to let go of. After sunset, light a golden taper from the dark candle. Extinguish the dark one. Make wishes for the lengthening days.

Wild Ones, enjoy the season, whether it’s Solstice or Christmas, according to your beliefs, may it be full of the stuff that feeds the soul.

What is your tradition? I’d love to know.