Trump didn’t Start your Problems, Biden Won’t Solve them & Not Everyone Agrees with You. 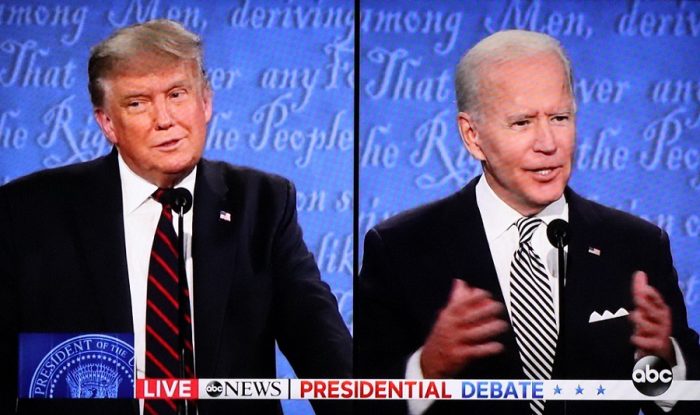 The polls are in and Joseph Biden will be America’s 46th President.

The race was tight. But the most intriguing thing about it was the nastiness I witnessed from both sides as they anxiously waited four days for the votes to be tallied.

Those who voted for Donald Trump have been posting that the other side hates America, and everyone who voted for Biden is crying as if they ended a truly fascist regime.

What is fascism, anyway? We keep hearing that word a lot—especially in reference to the current president.

Fascism was a philosophy coined by Giovanni Gentile. It is the idea of a large government that places everything inside of the state and has no distinction between private and public interests. Fascists tell everyone how to think and what to do, and the only identity they have is nationalistic; because being an individual, to them, is selfish.

Benito Mussolini formed the Fascist Party in 1919 based off of this philosophy. The fascist movement proclaimed opposition to social class discrimination and supported nationalist sentiments. Mussolini was influenced by Hitler himself, and he declared himself dictator of Italy in 1925. Mussolini is a true example of a fascist leader.

In 2016, I was beside myself when Donald Trump ran for president of the United States. I did not vote for him, and I could not believe that he won. But I got over it.

America is a country founded for and by the people. We fought the American Revolution against the British in order to get rid of our overlords. The president is not meant to be our overlord. And for all of you who cried as if you escaped Mussolini’s reign when the presidency was announced for Biden—you are being dishonest with yourself.

You have not tried to understand why Donald Trump won in the first place. You probably have not read the Constitution since high school. You may be taking for granted that, if you were born after 1980 in the United States of America, you are one of the most privileged people to walk this earth.

I grew up in a family of blue-collar workers. Every dollar I have is something I have made through hard labor myself, and I do not raise my fists at it. It has shown me courage, strength, and true independence. This is America. It’s a country where you can start a business out of your car without a college degree.

True fascists would jail you for your tweets, your Facebook updates, and any documented writings. True fascists would take that hard earned business you started from your car and give it up to the state. True fascists would not allow a site like Elephant Journal to be on the internet. Half of America refuses to agree with the other half, but the good news is that we live in a country where we can think freely and educate ourselves.

I constantly see Biden supporters calling Trump supporters fascist, but the irony of this is that Republicans focus on a small government and Democrats wish to expand it. Fascism only works in a top-down government when nothing is outside of the state. It was only in 2012 that the Democratic National Convention said in a speech that, “The government’s the only thing that we all belong to,” but people wish to focus on “the Orange Man” in office four years later and his “redneck supporters” instead of the real divide.

So why did Trump get elected in the first place?

After spending four years trying to understand this instead of bashing him on social media, as I see many of my friends constantly do, I have a few hints. People were sick of their tax dollars being wasted in war, as many politicians before him were warmongers. We see that Trump may not have the best poise and the greatest speeches, but he opened up to the American people, more than any other president in my lifetime, about his view of the media bias and how corrupt it can be. This is what ultimately landed him the job.

One of the first federal measures he signed was the “Right-to-Try” law, which allows patients with terminal illnesses to have access to drugs that have passed phase one of clinical trials but haven’t been approved by the Food and Drug Administration.

He also began to reform prisons, when many politicians before him seemed to put more people in prison for lesser crimes and longer sentences. (Check out a side-by-side view of both Biden and Trump’s justice reform policies. ~ Ed.)

When the coronavirus pandemic hit America, Trump left it up to each state to decide what is best to do during these unprecedented times. This meant that states could function as the Constitution intended the states to function, but many overlooked this and claimed that he did not do enough.

When the 2020 election came around, many people just wanted to see Trump out of office. I saw many people voting for Biden as a stab against Trump, but overlooking some of Biden and Kamala Harris’s policies in the mean time. Biden promised one thing, and that was to get Trump out—but what else will he do for us?

I’ve read articles and posts that claim the world will be at peace with our new president, but this all seems pretty unrealistic. Issues will not magically be solved by one president. Being peaceful because you like one candidate over the other and continuing to claim that one party is ultimately racist, homophobic, and evil without looking at programs and policies is gaslighting.

Posting about Republicans being racist, weeding out your Trump supporter friends, and acting as if Biden will save you from something you still can’t define is actually strengthening the divide in this country. Biden did not save you from fascism, but as a country we still have a lot of work to do. This means being tolerant on both sides, and not expecting magical transformation on Inauguration Day.

In 2016, Trump proved that our president is truly elected by the people. In 2020, the American people voted him out. And if you live in the United States of America, I hope you are proud of that.