Words from Oscar Wilde on Fearlessness, Authenticity & Ignoring the Critics.

Three ways to practice being yourself.

“Be yourself. Everyone else is already taken.” ~ Oscar Wilde

Oscar Wilde is perhaps one of the most misunderstood writers and most persecuted in history.

Known today primarily for The Picture of Dorian Gray, the story of a man who trades his soul for eternal youth and beauty, many of us overlook a central theme of his works and his life (“be yourself“) as we go about our day to day lives.

(Sidenote: Wilde is also known for the popular play-comedy The Importance of Being Ernest, which is quite a hilarious movie.)

Many of us still face persecution for the color of our skin, our sexual orientation, our political affiliation, and even with whom we’re associated. Oscar Wilde famously ended up imprisoned after allegations of his homosexual activity emerged during a libel case in Europe during the much less tolerant times of the 1800s.

While Oscar Wilde might have regretted his decision to initiate the libel case in the first place (attacking his lover’s father), which led to the digging into his own life and baggage, he likely never regretted being himself. (Though the libel case he himself initiated does point to another moral and principle of looking into the mirror first before judging others.)

Wilde also believed in a controversial principle called Aestheticism, which highlighted sensation and beauty as the key to leading an authentic life and is a key theme and moral from The Picture of Dorian Gray.

While we may disagree with this highly controversial view of how to live an “authentic life,” we could learn from Wilde’s own attempt to be himself despite the persecution he faced in his day.

If Oscar Wilde was willing to be imprisoned for two years for that, is it really too much for us to be ourselves and stay authentic to who we are throughout our daily lives?

Plenty of people will judge us no matter what we say or do, particularly in the digital age where people only have time to process half-truths and oftentimes believe outright lies based on things they’ve read or heard.

Mother Theresa likely has (or had) critics. Taylor Swift has plenty of critics. Justin Bieber has critics (as well as many fans, though I’ve yet to meet one, ha!)

If we look at any political figure (current day or any historical period), it’s highly likely that at least half the country (or world) dislikes or disliked that particular person.

As long as we’re not harming others, why not attempt to live life to the fullest by simply being ourselves through embracing our personal passions, interests, and desires regardless of what others think?

1. Embrace a new job that may be different than what others expect from us.

Perhaps the job is in a new city or a new country, and we might even feel afraid that we won’t be accepted.

At a minimum, we’d learn a lot about the new region and may even find ourselves enjoying the new city and culture even more than our previous home. After being released from hard labor in prison, Oscar Wilde left Ireland and Britain and found happiness in France.

Vacation to Paris, anyone?

2. Go on that date we’re hesitant about.

After all, the only thing we have to lose is an hour of time. We could gain a lifelong friend or partner. We might even use Bumble to find friends and business connections.

Time is working against all of us, and one of the many lessons from 2020 might be to “not wait for tomorrow what can be done today” since the future is always uncertain.

Another quote I’ll leave with is a wise line from the late genius and one of America’s greatest writers, David Foster Wallace (DFW).

“You will become way less concerned with what other people think of you when you realize how seldom they do.” 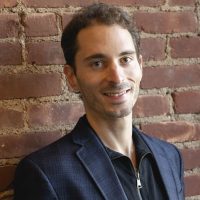