My wife and I were both working full time. I was going to graduate school, we were renovating an 80-year-old house (picture gutted rooms, plaster dust, and unpredictable plumbing), and our first child was less than a year old.

It was the spring of 1991, and we all sat in our homes and watched Rodney King being beaten by the police. An unarmed Rodney King. This was the first time that I, and most white Americans, had ever seen such a thing. Many of us had some vague intellectual understanding that such a thing existed, but it was easy to believe it was a rare and unusual thing whenever it crossed our minds.

Most of us believed it was something that was largely relegated to both history and the South. Those were comfortable beliefs. I remember that there was outrage and, among white people who cared about justice, a naïve belief that the officers would be punished.

I understand the aphasia that comes with having privilege, and I also understand the cognitive dissonance that comes with seeing the truth. Privilege is not a unitary thing, and there is, certainly, a continuum of privilege. Life can be difficult and even tragic for all of us, and we can all point to people who look like us who seem to have it much easier.

However, one of the most important truths about white male privilege is that any circumstance, no matter how difficult, would be worse without it. Any challenge would be more difficult without it.

I didn’t ask for it; I didn’t earn it, and I am responsible for what I do with the truth of it.

I am a privileged, middle-aged, white male. I’m also a psychologist. As a psychologist, I’ve had lots of training in understanding diversity. It’s impossible to do good therapy without a willingness to understand and work within a client’s worldview and experiences. Everything begins with actively working to hear and understand the client’s experience. Every action I take as a therapist has to be guided by the client’s needs and goals.

Therapy is not about my goals and my experiences. It’s not about me; it’s about the client. I’m not there to give advice or tell people what they should do. I tell new clients that my expertise is in the process of therapy and the client’s expertise is the client. I’ve had a lot of experience working within the scope of others’ worldviews, and I have had a lot of experience working with diversity. Even 25 to 30 years ago, when I was in graduate school, we received lots of training in understanding diversity, and it’s a continuing education requirement for psychologists.

I have always loved people and their stories, so understanding and valuing diversity came easily for me. I spent 1st through 4th grade living in married student housing at Purdue University, where I lived with children who were, literally, from all over the world. I spent two years of my early adolescence in India, where everyone and everything was so different—until it wasn’t.

I was fascinated by the many different ways of seeing life (some vastly better than what we did back home) and, over time, I was in awe of how, at the core, we are all so similar. I am still in awe. I am in awe of the strength, the courage, the ability to endure, grow, and transcend. I am in awe of the human spirit and the human heart.

So, yes, understanding and working with diversity came easily. I was an emotional, empathic, and artistic boy in the 60s when “big boys didn’t cry.” I was a foreigner in India, and when I got back from India and moved to a small town in Missouri, I was “that weird kid from India.” I have some understanding of being the “other,” the “odd one,” and “the lesser than.” That understanding has at times been a strength, but it has also, at times, been in my way. In some ways, I have overestimated how much I understand.

I have never felt part of the mainstream of white-male-America, and I never felt like I was part of the privileged white guy network. No one ever asked me to join, and I never signed up. That’s exactly how privilege works. That’s how institutional and structural racism work. It’s so insidious and so seamlessly built into the system that it’s easy to miss, but only if you have it.

Let me just recap a couple of points before turning the next corner: I’m good with diversity. In fact, I love diversity. For me, diversity is more stories, more points of view, more color, more texture, more threads in this tapestry that, quite frankly, leaves me awestruck. I’ve worked hard at confronting and understanding individual racism. I believed that I had more than an intellectual understanding of institutional and structural racism. I truly thought I was one of the good guys because I wasn’t one of “those” people—the loud, angry, hateful white guys. It’s fair and accurate to say that, in many, many ways, I’m not one of those racists.

However, what I have failed to grasp and understand adequately is the depth and breadth of the impact of racism. I have failed to adequately understand my privilege as a white male and my role in perpetuating racism. I have been too comfortable in my belief that there was a vast gulf between me and the “real” racists when the truth is that there is a vast gulf between where I am and social justice.

Privilege is like a thief who brings us gifts. Just as the eye cannot see itself, privilege can only be seen when reflected in the truths of those who do not have it. It is easy and comfortable to assume everyone has it or that we’ve earned it and anyone else could earn it too.

Does the degree of my racism matter? Does it matter how great the gap between me and those who openly embrace racism? At some point and to some degree, yes, it matters; however, to parse questions of my guilt and responsibility is itself an exercise in privilege.

The most important questions begin with the impact. Where does my shadow land? Are my neighbors’ children hungry? Are they safe? When, where, who, and how much does my shadow, my racism impact someone else? What actions do I need to take?

I am not responsible for my ancestors’ actions, and no one has ever told me that I am. However, I am absolutely, wholly, and unequivocally responsible for any choice, decision, action, or non-action I take. I am responsible for all of the times and places that I am knowingly or unknowingly complicit in racism of any kind—regardless of if it’s individual, institutional, or structural.

I am now actively looking for my shadow. I am now working harder to shut up and listen. No one is responsible for teaching me. It is my responsibility to see, hear, and learn. The only way that someone of privilege can hope to understand racism is to learn from those who experience it.

It is also my responsibility to, then, take action. Real action that is guided, directed, and driven by the needs of those without privilege.

May we now fight to claim all of our family. 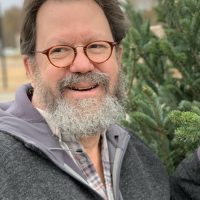 Dr. Michael Davidson is a psychologist, writer, and poet with more than 25 years of experience helping people navigate life with all of its difficulties and joys.  His work h… Read full bio