The recent kidnapping and murder of a young woman as she was walking home from a friend’s house has evoked a massive reaction from women in the United Kingdom.

They are using all the channels available to them to express their frustration and sadness that the streets of this country, and most other public places, are still potentially dangerous places for women.

(A planned street protest they wanted to organise was banned because of COVID-19 social distancing laws).

Much like the “MeToo” movement in the United States, there has been a spontaneous flood of responses from thousands of women all over Britain describing the repeated incidences of sexual harassment and abuse of all kinds that they’ve experienced since an early age.

They describe the tragic reality that everyday sexism, public abuse, and assaults from men are a normal, expected, and predictable part of life for most women. And the situation has been much the same for the past 50 years.

It’s understood that “not all men” engage in this kind of behaviour, but there also has to be the recognition that far too many men do. 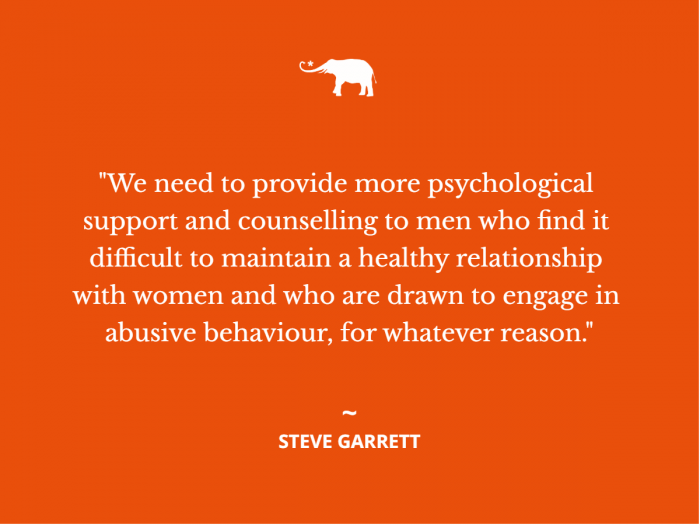 Until quite recently, I was blissfully unaware of the scale of this problem, even though it had not been at all unusual for a girlfriend to tell me of at least one experience of assault of some kind. Somehow, it never really hit home with me how common this kind of assault is, even though women have been shouting about it for long enough.

Perhaps there’s been an unconscious looking away on my part, rooted in the shame that I have felt about it as a man, and in not knowing what I could do about it.

There is huge and understandable frustration on the part of women that our government has not taken effective steps to remedy this appalling situation.

On a recent radio phone-in show, I heard a number of women of different ages and professions describing what they felt needed to be done, as well as several men asking what they could do to support change, and help women feel safer.

End gender-based violence: 6 steps needed in the next 5 years for women to begin feeling safe.

Use as many ways as possible to make sure that more men are aware of the huge scale of sexual harassment and abuse so that the majority who don’t feel the need to publicly demean and threaten women can be seen by women as allies in reducing this kind of behaviour.

Amongst other things, men can help by becoming “active bystanders” who call-out, and even step in, when they see a man being abusive to a woman or expressing the kind of sexist views and attitudes which in any way condone that.

There is already a successful campaign in the United Kingdom and elsewhere known as “White Ribbon,” which invites men to make a pledge to do exactly this. If the government better promoted the actual statistics relating to the levels of domestic abuse, sexual harassment, and gender violence in this country, I believe more men will want to be actively involved in change, and be more vocal in making clear the feeling amongst the majority of men that this kind of behaviour is disgusting.

The laws have to be strengthened so that even low-level threats against women such as verbal abuse in the street and kerb-crawling are illegal, and being caught will result in the naming and shaming of perpetrators as well as (at the absolute least) a fine, and, for repeat offenders, a prison sentence. Women have to feel confident that the police will take their complaints seriously and act on them.

3. Educate at the school level.

We need much more focus at both junior and secondary school level on teaching about all aspects of relationships; especially reassuring girls that they do not have to, and should not be expected to, allow themselves to be threatened or abused by boys; at the same time to make it clear to boys that not only is such behaviour illegal and immoral, but it is also demeaning to themselves and harmful to the girls that they are picking on.

This process might be aided by some high-profile male role models speaking out about why they think gender abuse is an embarrassment and a disgrace and should be a source of shame to the men involved. The Good Lad Initiative is a British organisation that runs workshops with secondary school boys to help them question sexist attitudes and behaviours they may have adopted without thinking, and much more of this is needed.

Make resources available for the research needed to gain a better understanding of the psychological and social roots of this misogynistic behaviour, including what harm is caused by easy access by males of all ages to violent and degrading pornography. As one woman on the radio remarked: there seem to be a lot of angry women-hating men out there, but what are they so angry about? In comparison with the resources that are poured into trying to find a cure for cancer, there is much less investment in trying to find a “cure” for gender-based violence, even though the numbers of women harmed by it are of a similar scale.

We need to provide more psychological support and counselling to men who find it difficult to maintain a healthy relationship with women and who are drawn to engage in abusive behaviour, for whatever reason. There are a number of perpetrator programmes with varying degrees of effectiveness operating in the United Kingdom, and lessons can be learned from them so as to better understand the leverage points which will encourage and enable abusive men to change so that adequate and effective programmes can be rolled out across the country.

It’s time for a national education programme of the same scale used to discourage people from smoking or from drink driving. Let’s make it clear to everyone to whom it isn’t already obvious why all-male harassment and violence towards women is wrong. Let’s do this by describing the lasting harm that is done to women as a result, as well as affirming that perpetrators have a realistic chance of being arrested and convicted of a crime.

This campaign needs to be designed for maximum impact, showing women as daughters, mothers, sisters, and grandmothers who explain how this kind of male behaviour makes them feel in a way that the men watching can hopefully relate to and empathise with. Men need to understand how deeply demoralising and depressing it is to feel unsafe going out in a public place because another human is likely to assault you.

The overall intention must be to bring this everyday abuse of women out of the shadows and into the sunlight of public awareness and attention to expand public will for the actions described above to be taken, and enough resources provided in order to bring about change as soon as possible.

For the women of Britain, and of the world, this change is long overdue, and I vow to do whatever I can as a man to help move it forward.

Be part of the solution: