A post shared by Annie Grace & This Naked Mind (@thisnakedmind)

Now that we have been dealing with the pandemic for over a year, it seems like all anyone can talk about is going back to normal.

We’re making strides to finally get a leg up on the virus, but one fact remains—we’re never going back to normal.

This pandemic and the ensuing changes it has brought about have shifted lives and society so drastically that getting back to normal isn’t even a possibility. Things will change again and we’ll resume doing things we did before, but we aren’t going back to what was.

In fact, as restrictions begin to ease, we will probably see things get worse before they get better. We’ve been changed. We’ve been hurt. Some of us haven’t coped well.

This pandemic forced us to drop one of the things that is most vital to humans and to our mental health—connection.

Johann Hari states that human connection is the opposite of addiction. During a year where all of our stress, fears, and anxieties were amplified, we could not turn to the very thing we needed the most—human connection. Oh, the irony.

So many turned to comfort and solace another way. We’ve long been told that alcohol can’t let us down. After all, isn’t it there to soothe and take away the things that hurt us? Alcohol is the oldest known sedative, having been used in ancient Mesopotamia. In 2020, it once again became the numbing agent of choice.

That is why things are going to get worse before they get better as we emerge from this pandemic. We are going to be dealing with a myriad of new issues. Resuming “normal” activities will begin to shed light on just how not normal our coping mechanisms have been. You can’t hide wine in your coffee cup once you’re back in the office. Hangovers are really a b*tch when you can no longer just roll out of bed and commute to your couch.

Most of all, we’re going to have to face the depression, the anxiety, and the other issues that have made normal seem like it is a word that no longer exists in our vocabulary.

So, no. We’re not going back to life as it was. That is a given. It’s also not a bad thing.

Life, as it was before, wasn’t sustainable. It wasn’t normal. It was out of control. One of the reasons these restrictions hit us as hard as they did is because we were living life at such a fast pace that we never had time to slow down, regroup, and just sit with our feelings. Even if we were dealing with depression, anxiety, relationship issues, or other problems before, we could ignore them as long as we kept the bullet train known as life going.

Many of us did what we’d always done. Avoid it. Unable to outrun it, we numbed ourselves. A drink here and there just so we could forget for a minute that we were sad, lonely, anxious, hurt. Except now all those feelings were sitting on the couch with us and avoiding them kept getting harder. So, we’d have another drink or two. 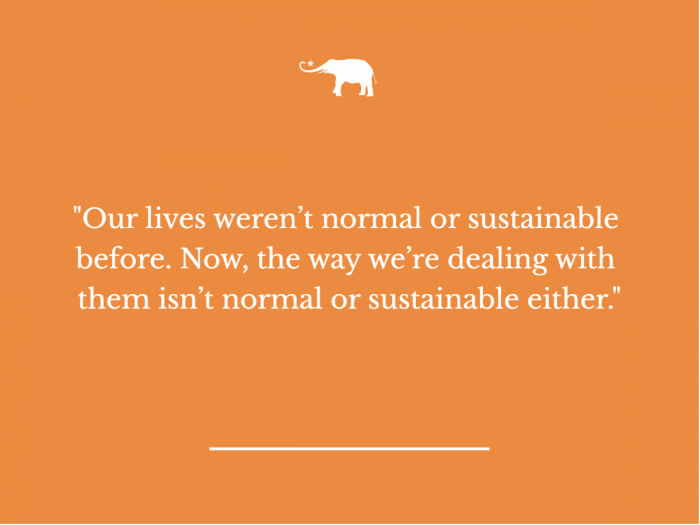 The greatest blessing I could think of is that I was already a non-drinker when the pandemic hit. Had I still been drinking, had I still had any desire for alcohol, I might not have even survived the past year. Thank goodness that wasn’t the case. When that train came to a screeching halt for me last year, I only had my carry-on bag with me.

I’d already sorted through all that messy baggage. I would never want to go back to what I considered normal while I was still carrying all that baggage with me. Even in the midst of what has been the most turbulent year globally, I’ve been able to find joy, to find peace, and to feel alive, because not only am I free from the baggage, but I am also not numbing anymore.

There is hope ahead. That hope is in the fact that we aren’t going back to normal. We’re going to go forward to something better. People will struggle, but ultimately they will also find such amazing freedom. Freedom from numbing. Freedom from addiction. Freedom from the burden of carrying around the heavy emotions, the shame, the guilt, the loneliness, and the isolation.

We’re never going back to normal again because we deserve better. We deserve more. We deserve freedom, happiness, and a chance to hit pause anytime we need to.

Want to move past normal and into a better life? Join us in The Alcohol Experiment. You will receive encouraging and mindset-shifting daily videos and emails and an incredible community of 220,000+ people also experimenting with their alcohol intake. It is completely free (and always will be) at The Alcohol Experiment.