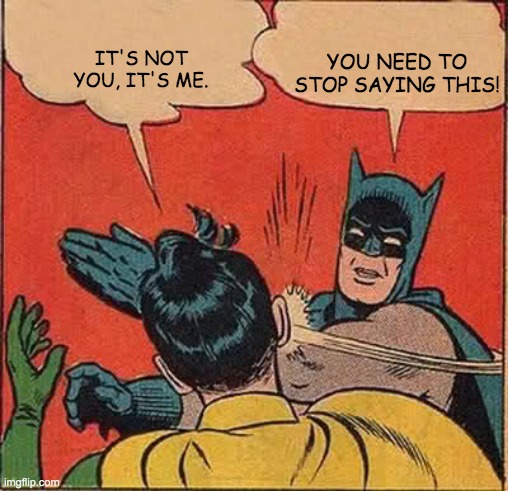 A breakup feels like an enormous slap in the face.

We’ve all been there, so we’ve all heard (and said) all kinds of different breakup lines.

Breakups come in different shapes, but I believe they fall into three categories:

Rude breakups, like ghosting, are…well, rude. We disappear on that person without leaving them any guidelines or hints for how to proceed. Fake breakups are a bunch of lies that we tell the other person so we can feel less guilty and less responsible. The genuine ones (you guessed that right) are authentic and leave no room for assumptions or expectations.

Today, we will talk about the fake breakups. The ones that make us believe a false reality. The ones that leave us feeling confused and rattled. Sadly, we’ve been seeing more and more of them.

Now I know that not all of us know how to efficiently communicate our feelings, but I think we all know at least how to be genuine. Pulling cliché lines to break up with someone is easy. But taking a short trip within to give a compassionate and viable explanation is hard; we just don’t do that.

I understand that we need to be careful with the wording because any wrong, hasty word could cause long-term emotional damage. So we throw random breakup lines around like confetti, thinking that since it’s over, why bother and give a proper explanation. You’re probably never seeing that person ever again, so why be honest about the reason?

When I was younger, I used to fall for cliché lines. But many years later, I acknowledged the enormous emotional damage that fake breakups foster. When we are left with nothing but lies, we end up living a false reality. Instead of doing the necessary inner work and learning from what happened, we become more confident and drown deeper in the traumas and flaws, which our ex didn’t bother informing us about.

Do you use these lines? Please ditch them right now:

I heard this line so many times that eventually I realized it was me. But no one bothered to tell me where I went wrong, what I could have done better, or how I could have improved. We think that taking the blame is easier than telling the other person about their flaws. But by addressing our issues, we help the other person to work on themselves and heal their traumas.

Now, of course, I don’t mean we should boldly say to our partner, “You’re too needy, and this is why I’m breaking up with you,” but there is a better way to go. We could say, “I don’t think we are compatible,” “I don’t see myself happy in this relationship in the long-term.” “We could be happier, but I feel we have different ways of being in a relationship.” Saying this surely leads to having an honest and open conversation about what went wrong and why it won’t work out.

2. “Relationships are just not for me.”

If I had a dollar for every time someone said this to me, I would have been a millionaire by now. Let’s clear this one up. Relationships are for everyone. Who doesn’t like the warm touch of someone, to love, or to feel loved? We all do. But no one has the guts to tell their partner that they don’t want a relationship with them. So we make it a generalized statement and let the other person believe that we’re off to isolate ourselves on a faraway island and never see anyone ever again.

Don’t freak out just yet. You don’t have to tell the other person, “Hey, listen, I just don’t want a relationship with you.” But we could definitely say, “I feel we are different; I think it’s not going to work out.” “I can see that we don’t bring out the best in each other.” “We’re not on the same page when it comes to values.”

3. “You deserve someone better.”

If you ever hear this, know that this person is telling you that they are not ready to (or don’t want to) make an effort to take your relationship to the next level. So instead of coming clean, they idolize us; we shed tears of joy because they’re so sweet to know our worth. If you’re the one saying this, know it’s okay not to be ready, but it’s not okay to lie about it.

“I think it’s better if we move on because I don’t feel ready to put in the necessary effort to make this work.” “I’m currently learning how to deal with my own insecurities and traumas, so I don’t feel good enough now to be in a relationship.” These are two alternatives that sound more genuine than “you deserve someone better.”

At the end of the day, we all have different experiences, belief systems, and communication styles. But no matter why you’re leaving your partner, remember that you’re dealing with another person—another human being with emotions. While honesty might sound terrifying at first, the other person will definitely thank you for it in the future.