Dear Uterus: There are a Few Things I’d like to Tell You. 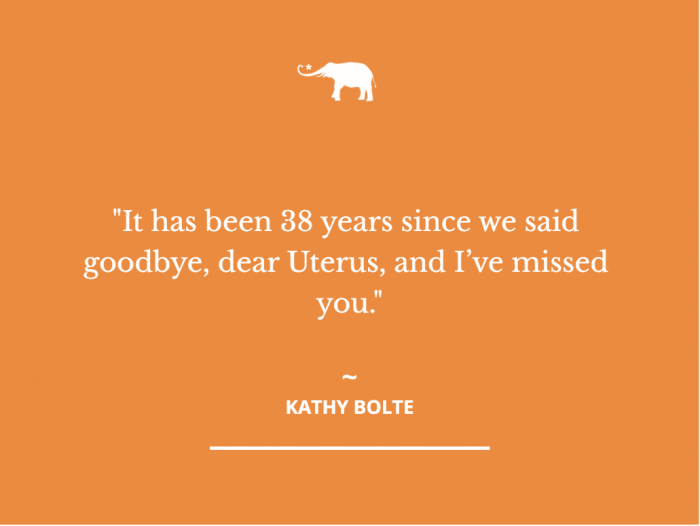 I was raised in a generation of kids whose parents didn’t talk with them about sex.

In fact, I don’t remember anyone talking to me about what to expect from my body. No one told me the vital part you would play in my life. I had some vague understanding that there would be change, but it all remained mysterious.

The summer of my 13th year, as I wiped myself after peeing, I noticed blood on the toilet paper. I knew a little something about this because I had seen my older sister’s used sanitary napkins neatly wrapped and placed in the trash can next to the toilet.

I opened one once to unveil the mystery and found dried blood on the Kotex. I had no explanation as to why this happened, or that this blood actually came from you. And, of course, I would have never asked.

The sight of my own blood quickened the pace of my heart that day. I called my mom at work to tell her of my discovery. Even then, she didn’t explain what was happening. She just instructed me to look under the sink to find a sanitary belt and pads.

As my body matured over the next few years, I experienced the flutterings of my changing hormones. I felt excited when I slow danced with the boys. I had my first cautious kiss at a swim party when I was 14. I started getting noticed and feeling desirable at 15. At 16, I got my first boyfriend and soon, we started having sex—secretly, in the backseat of his car.

Believe me, dear Uterus, when I tell you that sex was not a fully conscious decision I made. I was what they call a “people pleaser” and, honestly, I had sex because my boyfriend wanted to. We were doing something that was risqué and racy, and something only we knew about. I knew that sex could somehow lead to pregnancy, but I didn’t put two and two together to realize that I could actually become pregnant.

In February of my senior year of high school, I learned that I was pregnant. I was 17. We got married in March and I gave birth to my daughter in October. It was 1968. The marriage only lasted a year and a half, but motherhood would last a lifetime.

If I were a more gifted writer, I would write a book to tell you how I had to lift my chin and continue to attend classes through a sense of deep shame and morning sickness. I could tell you how awful it was to have a belly that was six months pregnant at my graduation ceremony.

You should know how grateful I was when my girlfriends gave me a baby shower and how the look in their mothers’ eyes was that of profound relief that I was not their daughter.

I was never invited to sit in The Red Tent with wise women who would take me into their embrace and usher me into womanhood. No, I was the one who sat on the periphery. I was the one who wore The Scarlet Letter.

I could tell you how daunting the task of being a child while raising a child was. You know how I had to put my dream of becoming a professional dancer away and learn, instead, to navigate my stark new life as wife and mother.

That was the first time you radically changed the trajectory of my life.

Let me tell you about the second time, my friend.

It was 1983. I had just turned 33 that July. In August, I met the man who would ultimately become my forever beloved. In September, we started dating. In October we had sex, sex, sex, and more sex. This time I wanted it. I loved it. I craved it. This time it was fully reciprocal. This time it caused you to start to bleed.

In November, I began to experience unexplained bleeding between my periods. It was just a little blood on the tissue. Very subtle, and yet, there it was. In late November, I learned that the blood was a sign that I had cervical cancer.

Several diagnostic procedures later, I learned that the cancer was not contained in my cervix but had invaded you, dear Uterus. You were filled with cancer and had to be removed right away, to save my life.

I wondered what would become of my beloved. We had only been together for three short months. This would surely give him license to run. What man would take on a single mother of two with a possible death sentence?

As it turned out, this precious man stayed fast by my side through doctor’s appointments and surgeries, through treatment, and through my recovery. He took care of my children. He cooked and vacuumed my floors. He cleaned my toilets, and he made certain I knew that I was deeply loved. Even today, he is still showing me that I am loved.

It has been 38 years since we said goodbye, dear Uterus, and I’ve missed you. There have been grandchildren to celebrate, parents to mourn, achievements to honor, menopause to endure.

I’m the elder woman in my family now. I’m the matriarch, trying to hold the wisdom pearls for my daughters and granddaughters. You are my womb, dearest friend. You are the place from which this wisdom has been birthed. You are the place where it is so tenderly held.

Even though you are no longer physically with me, your creative energy and your nurturing container will always be a part of me. When I feel my life fall into chaos, you are where I land. Your woman-wisdom will always give me comfort.