You know it’s time to Reclaim your Power when “Should” Becomes a Lifestyle.

I learned a long time ago that I shouldn’t “should” all over myself.

For most of my life, I’ve held myself to high, unreasonable standards that didn’t apply to anyone else. Comparing myself to others—to their achievements, lifestyle, talents, creativity, anything really—was a habit I indulged in often, using to feed my sense of unworthiness.

Eventually, I became aware that I constantly used the word “should.” My well-fed inner critic loved to use this little word to pressure me into action. It used it to inform me of all the things I should and shouldn’t be doing, based on its expectations of how I should be.

Honestly, I didn’t know how to write that sentence without the word should!

The English language is filled with traps that limit our mindset, and “should” is perhaps the most insidious. This one word has the power of transforming us from creators and choosers of our lives to powerless victims. When we say we should do something, we trick ourselves into believing that we don’t have a legitimate choice not to. If we end up doing the thing, it’s only because we were supposed to, not because we wanted to. If we don’t do it, we have to accept guilt as punishment for our rebellion.

Eventually, I became aware of my shoulds and made an effort to remove the word from my vocabulary. I changed the way I spoke to myself by using more compassionate language and replacing the word should with “want” or “get to.” Even so, I continued to experience the familiar resistance, overwhelm, and shame that kept me stuck in a rut.

What started to become apparent was that my shoulds never went away—they simply became stealthy. No longer was I overtly “shoulding” myself; rather, “should” had become a shadow framework exerting influence below my conscious awareness.

When I came across the term “should consciousness,” it clicked: everything was a should for me. All I had to do was scratch below the surface to see that I used it to feel bad about myself for a million different reasons. I used it to feel like I wasn’t doing things right, wasn’t good enough, and wasn’t fully in control of my choices.

The should trap extended to other people as well. I got to feel righteous indignation when people didn’t act according to my expectations and moral code. I got to feel victimized by other people’s choices, solely based on my opinion that they should be doing something differently.

Should consciousness pulls us out of our power through the judgement that we, the other person, or the situation, are not acceptable as is. “The present needs to be different!” should persuades us. “But don’t worry, I know what to do, no need to panic. If you do this, they stop doing that, and the situation changes as such, everyone gets to relax and be happy.”

Should exerts judgement on everything instead of looking at situations as a composition of facts, which they are. You can either go to the gym or not—this is a fact. The weather is cold and wet—this is a fact. That person is speaking loudly, impacting your ability to hear what your friend is saying—this is a fact. The idea that anything should be different than it is, is merely that—an idea. An opinion.

When we start to acknowledge the reality that we get to choose how to respond to our environment and that nothing can make us feel a certain way, should consciousness is replaced by empowerment. With it, we begin to feel peace, as the internal battle we’ve been fighting loses ammunition.

We start doing things because we want to, because we’re motivated by positive aspirations, such as health, wellness, and fulfilment. When someone does something we don’t approve of, we respond from a place of choice rather than react from a place of victimhood. 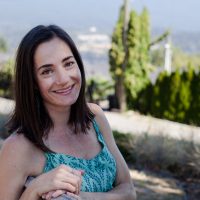 Shannon Janette is a life coach who helps people navigate personal transformation and life transitions with ease, grace and humour. She believes fiercely in the transformative… Read full bio