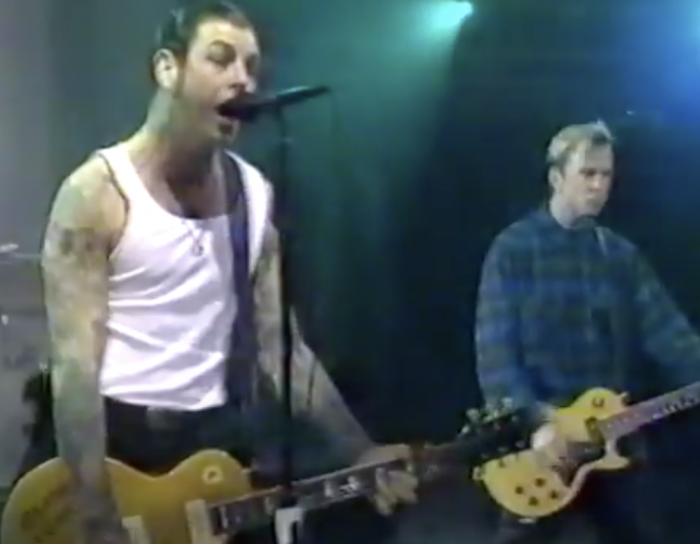 What happens when a generation of men grows up without a father?

I am not saying that the absence of a father figure automatically leads to toxic masculinity, but I can tell from my own experience that there is a connection between the two.

My dad died in front of my eyes when I was 16. He had cancer. It was a rough time.

Up to that point, I looked up to my father, who was a successful entrepreneur, but after he passed, my life slowly shifted in a different direction. A few years later, I had to go to therapy because of substance abuse, depression, and lots of anger issues—I was diagnosed with PTSD.

I was angry in my early 20s—angry at the world without knowing why.

At that time, my passion for punk rock music started. The lyrics and vibes of these songs totally resonated with angry Robert.

“It was me against the world, I was sure that I’d win.
The world fought back, punished me for my sins,
and they tried to warn me of my evil ways,
but I couldn’t hear what they had to say.” ~ Mike Ness, Social Distortion

Without even noticing, I started to look for new role models. I always had a good connection with my mother, who did her best, but of course, she wasn’t able to replace my father.

When I studied politics and sociology, I read the books of a German psychoanalyst called Alexander Mitscherlich. One of his books described the post-WW2 situation in Germany as a fatherless society. He described how the absence of role models for young men could lead to a lack of discipline, moral decline, and mental health issues.

Looking at German men of the so-called Boomer Generation kind of proved his point. These children who grew up without fathers turned into the fathers of my generation. My dad never even knew who his dad was, as he was born in 1943. Today, we have a new generation of children growing up with fathers, which is not caused by wars, but by skyrocketing divorce rates and men running away from their families—different cause, same problem.

As children, we learn from what we see. The relationships, power dynamics, and ethics we witness shape our view of the world. If someone has an abusive parent, there is a high chance of them acting in similar ways as an adult—often without even noticing.

“And I think about my loves, well I’ve had a few.
I’m sorry that I hurt them, did I hurt you too?
I took what I wanted, put my heart on the shelf.
Now how can you love me when you don’t love yourself.” ~ Mike Ness, Social Distortion

Growing up without parents has a huge influence on our personalities as adults. At the same time, we have to be aware of our own power to make choices in life. When my dad died, everyone was tolerating my outbursts and misbehaviors—but that didn’t solve any problems.

It was when I hit rock bottom and went to therapy that I slowly started understanding that everything I considered as “normal” might have been a misperception of reality. I had no idea how to be an adult man, but I tried to fill the empty role of the man in the house. I remember threatening our neighbor with violence because he made fun of my mom—I wanted to be a good boy.

I was full of toxic masculinity as a young man—and I feel for all the lost male souls who are also struggling to find their role in society. But from my own experience, I can only suggest one thing: accept to be wrong about things.

Insisting on being right not only doesn’t help in the actual situation, but it also prevents us from learning our lessons. Learning from our mistakes is not a weakness. Admitting our mistakes is actually a strength many of us do not have.

I have heard stories from friends who had serious disagreements with their dads when growing up. Some of them didn’t even talk to their fathers for years. But usually, around the time when they got married or had kids, something quite interesting happened: their dads reached out to them and advised their sons on how to raise a child—which included laughing about their own mistakes. These dudes became amazing fathers.

I will never have that experience, just as all the other dudes without fathers. It’s rough, but it is not an excuse to act like an idiot for the rest of our lives. I get it; others have it better, and we are angry—but it’s not the fault of the woman we are dating that we don’t have a father.

Admitting that the absence of a father is not easy for men, but it is necessary. It is a trauma we carry, and there is no need to deny it. Realizing that we made mistakes out of that suppressed anger is our challenge for life.

Once we are willing to face these internal struggles, we can let go of the toxic masculinity that is covering up our fragility.

And for all the women reading this: if you notice toxic masculinity in men, please take a moment and ask yourself what might have been the reasons for that specific man to act out the way he did. It doesn’t apologize for any misbehavior, but it might be the key to overcoming these patterns—and after all, isn’t that our main goal?

And here is the song that belongs to the two quotes in this article. One of my all-time favorite bands Social Distortion and their song “I was wrong.”