The Selfishness of People Pleasing (& 10 Ways to Stop). 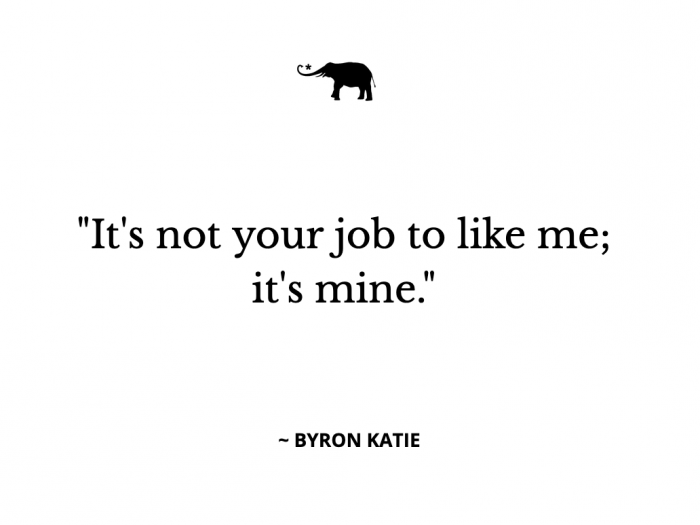 “We are a mix of nature and nurture.”

This is the pedestrian explanation that most social scientists bandy about when they try to explain how people’s characters develop into adulthood.

Personally, I’ve always believed that it can mostly be traced back to the dinner table. I had an eldest brother who came out of the womb in a bad mood and an older brother who rivaled him by learning to be as exasperating to my parents as humanly possible.

As working-class young people with three children, most of my parents’ energy was spent trying to discipline the difficult one and cheer up the moody one. Somehow, in my underdeveloped mind, I reasoned it out that my only shot at attention was to do everything right, talk about how much I loved school (my first elaborate lie), and promise them—at eight years old, no less—I had every intention of growing up to be a brain surgeon.

Granted, none of this was as traumatic as, say, the childhood of a Lebanese boy growing up in Beirut in the 90s, but at the very least, it did manage to send me neatly into adulthood as a people pleaser. I can promise you, if you’ve ever asked me to do something I didn’t want to do, you would’ve received a 45-minute speech in lieu of the one-syllable word that those of my ilk find it so taxing to say—no.

Because simply saying no and walking away usually opens the doors to all of the worst nightmares a people pleaser possesses. We imagine that within minutes, an aggressive campaign begins, and its sole purpose is to make sure the entire world is aware of how sh*tty we are.

And therein lies what makes people pleasing one of the most selfish acts a person can engage in. Generally, people-pleasing behavior has nothing to do with the person you were trying to please. It is all about you—the people pleaser. It’s how you feel about yourself that is the first priority.

Having first-hand experience with this issue, I will admit that it is simply not possible to just stop people pleasing. These are deeply ingrained behaviors, and the only way to change them is to continually work on them over time.

That being said, here are 10 ways we can begin to go about it:

A lot of times, we have a tendency to answer people quickly and then get angry at ourselves later. As a matter of fact, this may be so deep-seated, we may not even realize we are doing it. Slow it down and think about how you really feel about what you are being asked and don’t agree unless you really want to.

Don’t leave commitments open-ended. If someone wants your time and you have an hour to spare, make sure you express that—and for God’s sake, stick to it.

Like playing the guitar or changing a diaper, the only way to learn is by continual practice. Pick something that won’t be terribly earth-shattering and simply say, “No.” Then stop. Fight against the urge to explain yourself for 20 minutes. In the wise words of Nancy Reagan, “Just say no.”

If a person knows how to manipulate you, they oftentimes will. Usually, it’s not malicious, but that doesn’t make it any less damaging. Watch out for stuff like, “You’re such a great artist. Will you paint a mural of Prince in my living room?” I mean, if you’d find it inspiring and wonderful, go right ahead. Anything less than that, don’t let yourself be tricked by your ego.

It’s totally appropriate to apologize for things that are your fault, but before you start doing that, ask yourself if it really is. You will find that most of the time, it isn’t. You are just trying to soften the blow you think you are dealing. This goes back to that fear of seeming like a crappy friend. This is not a good enough reason to do something you don’t want to do.

There is nothing wrong with being there for a friend when they are going through a painful breakup, but have you ever had one of those friends who calls you every day for weeks and incessantly repeats the same things over and over? I know I have. It’s not easy setting boundaries with someone in this state, but it’s necessary. I know this from experience. You can start by letting every other call go to voicemail. Believe it or not, the person will survive.

7. Accept That You Are Not Wonder Woman (or Superman)

I probably don’t know you personally, but I can practically guarantee that you were not put on this Earth to save the day whenever someone is in trouble. It’s okay. That doesn’t mean you are worthless.

Most of these suggestions are easier to employ with a little positive self-talk. Remind yourself, as often as possible, that people are not going to hate you for setting boundaries or saying “no.” Quite often, people will respect you more.

9. Detach From Other People’s Opinions About You

As you may have noticed, I have saved the really hard ones for the end, but this is something that needs to be worked on. Some people have spent lifetimes seeking validation from others. That is truly a waste of this precious resource that we often refer to as, well, our lifetime. There’s an expression in 12-step programs: “What other people think of you is none of your business.” The sooner you embrace that, the sooner you will be in possession of your own life.

10. Become Your Own Best Friend

Not one thing outside of ourselves will make us happy—no set of circumstances and no other person. We need to make that our priority.

If you do a little bit in this direction every day, you will set yourself up for success.