23 Million Women Miscarried Last Year—I was 1 of them.

My own story of miscarriage is a lot like so many other women.

Falling pregnant and carrying a baby to term is not as easy as we were told at school.

Looking back at myself ten months ago, I would say that I was blissfully naive and unaware.

My partner and I decided to test the waters—not expecting it to happen immediately the first time around. I remember calling the gynaecologist’s office and speaking to her secretary to make an appointment just after she had gotten the referral from my G.P. that we were trying, her reaction being in shock, “That was quick, huh.”

My partner and I are fit and active people; weeks had passed with what seemed like a healthy pregnancy and no indicators that anything was wrong. Finally, my first gynaecologist appointment came when I was eight weeks pregnant and she wanted to do a quick doppler check. Not hearing a heartbeat, she insisted I go downstairs for an ultrasound.

My gut instinct told me something was off, and sure enough, the ultrasound technician confirmed there was no heartbeat—I had a missed miscarriage?

“Don’t worry,” the gynaecologist told me, “you are perfectly fit and healthy, and will go on to have a successful pregnancy next time around.” I believed her; I accepted it. “It wasn’t the right time,” I thought. I was admitted to the hospital to have a dilation and curettage (D&C). If that wasn’t hard enough, I was told that I had a bicornuate uterus and would need to go back in to have a second one done a few days later, as they hadn’t been able to remove all the tissue.

Fast forward a few months, we began trying again. This time around I told myself I would be better prepared, take prenatal vitamins, avoid coffee—I would try to do all the right things. Again we fell pregnant fairly quickly—anxiety consumed me.

I had a bicornuate uterus but was reassured that there was no reason to be alarmed, especially if I made it past 12 weeks. I began having some heavy bleeding at eight weeks and feared the worst. Would the same thing happen to me again?

I went back for regular check-ups and was told that everything was okay with bubs, but there were two fairly large subchorionic hemorrhages (accumulations of blood between the uterine lining and the chorion) that needed monitoring. They present complications in early pregnancy where they can fractionally tear away the developing placenta from its site of attachment.

Twelve weeks came and went, and we allowed ourselves to get more excited. We held a gender reveal for my birthday and found out we were having a little girl—we named her Hope.

Unfortunately, the bleeding was getting out of hand. Forced to take to bed rest in anticipation that things would improve, I began doing my research and trying everything from increasing my vitamin C and vitamin K intake, to drinking water to excess.

I was in my 18th week of pregnancy and getting closer to the important 20-week mark. I was told that most subchorionic hematomas resolved themselves after this point and was prescribed progesterone.

Unfortunately, by this stage, it was too late. In the middle of the night, in excruciating pain, I was passing a lot of blood—to the point where I was fainting. My partner had to carry me into the emergency unit at the public hospital. It was extremely busy, and despite begging and pleading with nursing staff to be seen, they could do nothing for us. I ended up miscarrying in the emergency waiting room in the early hours of the morning the next day.

I can honestly say that I felt like I was having an out-of-body experience, watching over myself whilst all of this chaos was unfolding, completely numb and in shock—sucker-punched. My partner was distraught that we had lost our precious baby girl.

Having this happen to us again, I suddenly felt like I had joined some club that I didn’t ask to be a part of, and I’d dragged my partner into it too.

It felt like everybody else around me was going on to have smooth, successful pregnancies.

We give huge thanks to all our family and friends who supported us. They have driven us to be more vocal about this seemingly common occurrence for women, reducing any stigma, and talking about miscarriages and early losses.

The impact—emotional and physical—is something that has become foreign to so many people, because we have a preconceived “hush-hush” stance on losses. Needless to say, everyone grieves in their own way, but education and knowing where and what support is available is absolutely critical.

Do your own research before trying to get pregnant, take blood tests, get ultrasounds done—it could save you a lot of heartache. I wish somebody had given me this advice—instead, I accepted the information I was given at hand.

Big love to everyone—in support and memory for all those lost angels!

Note from the author:

In support of all those one in three women (and their partners/families), who have suffered through miscarriage or early pregnancy loss, my partner and I would like to raise awareness and donations for sands and red nose grief and loss, who have provided us with free counselling, resources, and helped many like us through this challenging journey. As a symbol of recognition, support, and healing, both physically and mentally, we are committing to running the Nike Half Marathon in Melbourne, Australia, on October 10th, 2021. You can donate to our fundraising campaign by clicking the link in my bio.

We will remain vocal advocates for the ongoing growth of support for women and men who have suffered through miscarriages and early pregnancy losses. 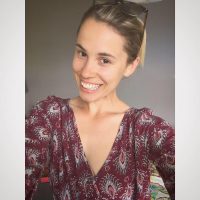 Ash Marita is an Aussie from Mornington Peninsula Melbourne. She loves creativity, learning about Buddhism, and how to be a better contributor to society. She traveled, taught… Read full bio