How to Face our Fears & Go for our Dreams. (Even when we’re Scared Sh*tless).

Ten years ago I was in a job I had a love-hate relationship with.

I loved what I did but hated the company, the culture, and pretty much everything else. Besides, I was bitten by a bug, one I had been squatting away for a long time.

I wanted to write a book. A novel. I even had a story in my head.

So, I did it! I decided to take a sabbatical and put in my resignation. My husband was getting transferred to another country, the United States of America, and it was the perfect opportunity to follow my passion.

It seemed like it was precisely what the universe wanted me to do. Why else would it send me to another country on a paid vacation?

I am meant to be an author, I told myself as I packed my bags for New York.

I cracked open my eight-year-old HP laptop as soon as the horrible jet lag went away and sat down to write.

But don’t all writers use a MacBook?

Of course, they do, I thought.

I got a brand new MacBook.

But everyone knows you aren’t a writer if you don’t spend hours sipping a Grande Medium Roast in front of your shiny new MacBook, and a Moleskine notebook.

I spent my days at Starbucks to get those creative juices flowing.

I told everyone who would listen that I am writing a book. I beamed, “I can’t tell you what it’s about, but it will be awesome.”

I wasn’t lying. Maybe I exaggerated a little bit on my writing speed, but day after day I was churning out chapter after chapter.

After countless visits to Starbucks and New York Public Library, I managed to finish the first draft. Okay, almost the first draft. I had a beginning, a middle, and an end with some parts missing.

And then I got pregnant with my first child.

Somewhere in between nausea, visits to obstetrician-gynecologist, and wolfing down chocolate cake for breakfast, I stopped writing. But I didn’t stop talking.

Long after my baby was born, I kept saying I am writing a book and then it became I was writing a book, but I got pregnant, or my husband traveled a lot, but it’s still there on my laptop. “What’s that? Yes, yes, I should get back to it sometime. I definitely will. Of course, I will finish it!”

The fact was I was not finishing the book. I had not even opened the manuscript in years.

A decade and two kids later, I was talking to a fellow entrepreneur (yep, I didn’t become a writer but somehow became an entrepreneur) about my brief stint in “becoming an author,” and I repeated the same thing: life got in the way, kids got in the way, totally happens.

And then it struck me. It hit me what a big fat lie it was.

Life did not get in my way of writing a book. My pregnancy did not stop me from becoming a published author. Neither did my kids, my husband, my neighbor, or anyone else.

I did! I was in my way the whole freakin’ time!

Right from the time when I finished my first draft and typed on Google “how to publish a book,” something happened. A fierce force, so strong, it physically stopped me from writing another word.

Steven Pressfield calls it resistance. Gay Hendricks calls it your upper limit in the book, The Big Leap. But there is a plain and simple word for it. The one we feel every day, without even realizing it.

Fear of rejection. Fear of failure. Fear of what others think about you. Fear of “what if?”

Fear has killed many dreams.

It continues to do so every day.

I never contacted a publisher because I feared they would reject me.

I never told anyone what my book was about because I feared their opinion about me and my writing.

I feared failure and by not doing something, it felt safe, because you can’t fail on something you haven’t done, can you?

The omnipresent inner dialogue, the voice of my inner demon would say, “Who the hell do you think you are to write a book?”

My fear failed me, even before I gave the world a chance to decide if my book would be any good.

Years later, I faced this demon again when I decided to launch my own business.

This time it was different though, I told myself I would face this mother f*cker head-on. I decided I would not let fear piss on my dreams one more time.

Was I scared? Oh, so freakin’ much! At every step.

The night before my website went live, I was terrified. I almost wrote an email to my designer to call the whole thing off.

The day I got my biggest client, I stuffed my mouth with brownies instead of signing the contract.

When I launched my first online program, I was so scared I became sick. My throat hurt, I had stomach cramps like I was in labor. I thought there was seriously something wrong with me. Gay Hendricks says this is your upper limit at play.

But here’s what many years of making excuses taught me.

I can either let fear stop me in my tracks and spend my life fearing fear or I can come into agreement with it and say “Okay fear, you can scare the sh*t out of me every time I do something new but you ain’t stopping me.” I decided to go for the latter.

I decided to leap into the fire, pissing my pants. Each time, every time.

I decided to do it scared.

If you ever find yourself in a similar situation (if you are being completely honest with yourself, you will see you already are), then I suggest you make a deal with the devil.

And then, you hunker down, put your blinders on and keep going. It’s going to scare the sh*t out of you, and you will have a tiny voice inside saying, “Who the hell do you think you are to do this?” But tell that little sh*t to shut the f*ck up and keep going.

Do it scared. But do it!

P.S I was scared AF when I was writing this article, but I decided to do it anyway! 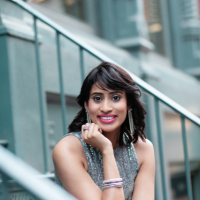 Deepshikha Sairam is a Business Mentor and Sales Strategist who helps thriving CEO’s leverage their energetic gifts for supersized results. In addition to mentoring her cl… Read full bio