The Key to the Treasure in Loneliness is Not what I Expected.

During the past year, amongst all that I had lost, were my community and friends.

Life, up until this point, had been spent trying to please others because I thought that was the kind thing to do and would keep people in my life. Sometimes my personality would take over, reminding people that I was an individual with certain opinions and my own perspective.

This led me to hiding myself even more in order to avoid rejection. It was a cruel dance because I now know that all they wanted was my complete allegiance to their cause, their cause being their life in general, and how they could use me for their own benefit. The more I hid and pleased people, the more I attracted the ones of the same sort in my life.

Anyone who is or has been a people pleaser will know what I’m talking about.

You see, once you set a certain standard for your life and people get used to that standard, any changes you start to make will have them turn their backs on you and running for the hills. Well, eventually, I had to make some changes, and they just so happened to coincide with the pandemic.

And boy did people run!

I grew up an introvert. With all its accompanying traits, I was a walking target for bullies. Refusing to be anything but myself, I was a big disappointment for others. My family didn’t do sensitive.

“Introversion—along with its cousins sensitivity, seriousness, and shyness—is now a second-class personality trait, somewhere between a disappointment and a pathology. Introverts living under the Extrovert Ideal are like women in a man’s world, discounted because of a trait that goes to the core of who they are. Extroversion is an enormously appealing personality style, but we’ve turned it into an oppressive standard to which most of us feel we must conform.”

Being abused both at home and school, I would resort to people pleasing. It is a kind of survival mechanism and a way to keep people in my life.

Over the years, this has led to codependency and the forced silencing of my truth. But with time, there was a building pressure within for my true self to be free and to fully express myself. I say fully because, with time, I began to express my truth in ways that made me feel safe.

I expressed myself through what I loved to do: art via my YouTube channel.

It is automatically assumed that if you are on YouTube, making content, you are naturally an extrovert. Thus, you must possess a popular and pleasing personality. This should result in friends and a community.

I carefully rode this wave, constantly maintaining the balance of just enough confidence to be able to ride the wave, while secretly withdrawing inward when no one was looking.

One day, the pressure to fully express myself and be free came to a head.

I decided to post a video on my YouTube channel about this and called it “My Spiritual Deconstruction.”

It was like my coming out. I was terrified!

You see, there was a lot at stake. My husband comes from a religious family, and my curious mind clashed with their ideology. The video received mixed feedback. It was different, and humankind’s track record with different isn’t great.

For the most part, the feedback was positive. However, I did receive messages from religious people who tried to convince me to be a good girl and go back into their box…or else.

Then my world fell apart.

My husband saw the video, and, in short, he lost it.

I lost my beautiful cabin where I created my videos, and worst of all, people dropped like flies out of my life. Thinking things couldn’t possibly get any worse, those who did remain in my life—I soon discovered—never had my best interests at heart.

In my vulnerability, they saw opportunity.

This left me completely alone, yet it was the best thing that could have happened for me.

During this time of solitude, I reached out to people. Even though they were aware of my situation, they did not know about the acute loneliness I was feeling. Soon, even they would start disappearing into the horizon, busy with their own lives and oblivious to my pain.

I had been pretty busy, at the time, on both myself and the projects I have always wanted to do.  A lot of painful yet rewarding undoing and unlearning was going on. I was being deprogrammed from the programming that happens to us all when we’re children.

And as painful as not having people in my life was, it was for the best. 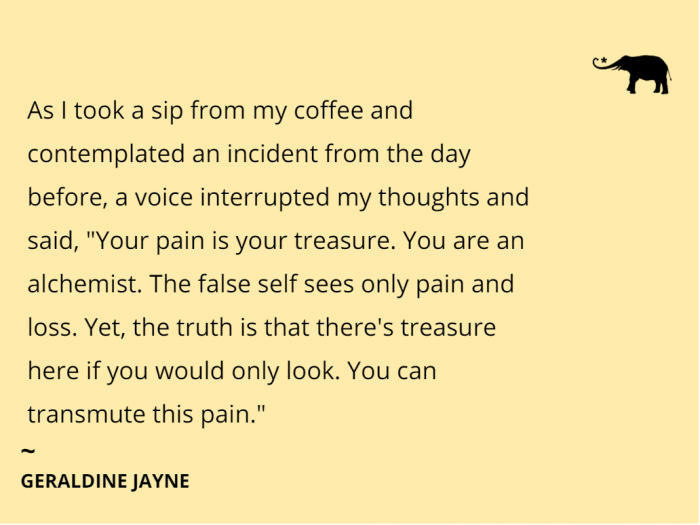 As I took a sip from my coffee and contemplated an incident from the day before, a voice interrupted my thoughts and said, “Your pain is your treasure. You are an alchemist. The false self sees only pain and loss. Yet, the truth is that there’s treasure here if you would only look. You can transmute this pain.”

Then I saw clearly that I had been pushing away my greatest gift. I needed to start embracing it!

As I began to embrace it in my mind, at that moment, my heart followed, and I saw images of just some of this treasure. In receiving these gifts, they will be shared, and in sharing, the right people will come into my life.

The key to the treasure in loneliness is in embracing it.

Don’t view it through scarcity and lack. See it as a key. Sit with this idea until you see what loneliness wants to bring you.

For example, as I embrace it and stop thinking about whom I have left to reach out to, who will hear me, and how I can stop feeling sorry for myself, I would think what can I do instead? Where can I channel my energy?

This is when the ideas come. Write them down. Follow the trail. Start to draw your treasure map. Then set off, following the leads.

On that journey you will begin to meet new people and characters you wouldn’t have normally thought of approaching before.

So, like Dorothy and her Ruby slippers, I had the power all along to bring me home. 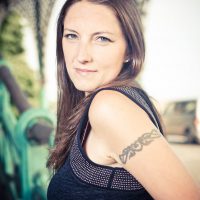 Geraldine Jayne is a professional dreamer, artist, seer, writer, wonderer, and wanderer! She sees the magic and wonder in life, and her passion is to awaken this magic in o… Read full bio