Oh Meditation Gap, I see you’ve Been with me All Along. 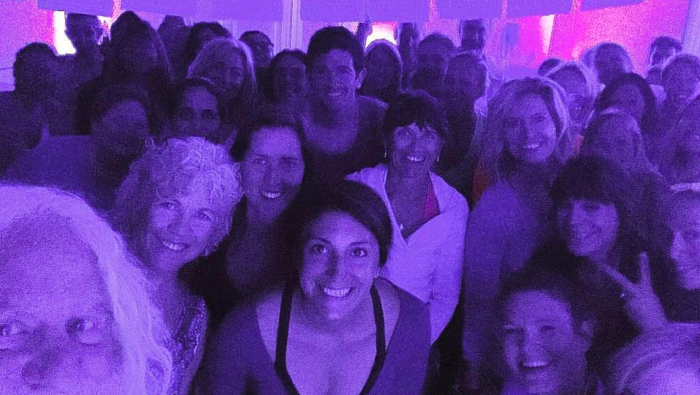 The gap from meditation? Pure presence.

How little I knew that magic and simplicity were always there for me.

I first learned about the gap when I began to practice with meditation teacher, Davidji. I stumbled upon him while building my schedule for a Wanderlust Festival in 2017, in Whistler, BC.

It was a turning point year when I was experiencing too many emotional and physical injuries that I couldn’t ignore any longer. I had to give myself a more introspective, healing experience and schedule classes I knew I needed instead of the ones I wanted.

Davidji’s photo on the Wanderlust schedule intrigued me, with his long, platinum curly hair, a black T-shirt, smiling, and posing with a mudra I wasn’t familiar with. I barely knew what a mudra was then. I read that his life took a big turn from working long hours in finance in the Twin Towers in New York, suffering from burnout, to post 9/11, studying under Deepak Chopra and becoming the first Dean of Chopra University for 10 years, training thousands of people in meditation before going on his own teaching path.

For some reason, I felt intimidated but knew his experience could help me. I decided my schedule would mostly be a meditation immersion. My first experience doing so. I registered for all seven classes he would teach, along with several yin and restorative yoga classes to allow myself to reset.

I made it to the first class at 8 a.m., early for me after a restless night, and I sat on a meditation cushion at the end of the first row at the Westin Hotel, where all of his classes were held. Davidji entered the room, with low, glowing lighting and a lovely altar decorated with candles, books, a Buddha, and several yogic symbols. He had a big smile and was funny, making us laugh and feel at ease. We settled in for our meditation practice, and his voice was strong but reassuring.

He began with having us ask ourselves why we were there, followed by other thoughts to consider what we needed to allow in and what was needed to be released. He asked if we were crisis meditators (me) or had a consistent practice. Then we meditated in total silence. Afterwards, the class was casually chatting, and then we began again with a practice of breathing techniques and another meditation.

The image of this article is after that first class when Davidji gathered us for a class selfie. I felt so much better than the broken mess I was feeling when I walked in just an hour before. The shift in mood of the room is evident in the photo. I didn’t realize this was a few minutes in the gap.

After the third day of six meditation classes (that included balancing our chakras, forgiveness, stress release, intention setting, along with daily yin and restorative sessions), I had slept through most of the night in my hotel room. It had been years since I had been able to sleep that long without waking.

The following day and last class with Davidji, he said we were going to get “kooky,” and I learned quickly that we would be leaving our comfort zone. With his guidance, we went deep into our vulnerability and had to open up with a classmate about what we discovered and needed to heal. We spoke of our truest heart’s intention, or sankalpa. We meditated afterwards, and at the end, there were many mixed emotions of tears, joy, and relief. As we walked out, he thanked us and said he’d see us in the gap.

I stood outside of the Westin Hotel where a tall waterfall, built into a corner of large rocks, was flowing to my right. The sound of the water’s soft roar splashing into the green pool was all I noticed. Everything felt and looked different. At first, I felt disoriented and thought something was wrong with me. I felt so shifted and realized then that I was in the gap for real. A much deeper and longer lasting level than I had ever experienced.

I was fully in the present moment as I walked through Whistler Village and watched tourists from all over the world. I listened to the hum of their voices, the sounds of mountain bikers and their equipment as they walked their bikes to the chair lifts. I noticed a child behaving in a way that would normally irritate me, but I didn’t feel that. I just watched her being alive and her parents working with her. It felt like I was only living through what my eyes and ears were showing me.

The Olympic Rings in the Olympic Village are rarely standing alone to take a photograph. I saw a line of people waiting to have their picture taken and many yogis doing poses in the rings. Even that bothered me in the past because of my want to take a photograph of the rings alone. That afternoon, I didn’t even take out my phone. I just watched, listened, walked with a straighter posture, and not moving in my regular rushing state with my thoughts flying.

For a while, even my heartbreak was gone, along with exhaustion and unease. I remember thinking of a word to describe it for it to make sense to me. There was only one word that came to mind—it was love. A universal, soul kind of love.

I thought of the man who I was in an emotionally unhealthy relationship with, one that I knew I had to leave. In that moment, I felt some peace about him, that we both had our stuff to be responsible for. I didn’t resent him or hate myself for being in it. I saw that, in pure presence, there is no fear, anxiety, or resentment.

It took four days to unexpectedly experience the gap as deep as I did. I learned the power of meditation and having a good teacher. Although I fall into old patterns and get stressed out, I know that if I can make the commitment to meditate regularly, I can find that presence and retain it longer. 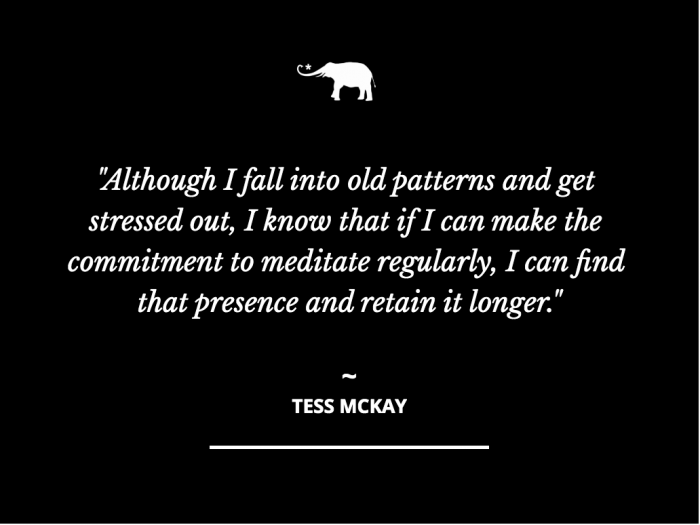 Even as I write this, or think about the gap experience, I can go into the present moment because the memory is so strong. But with a regular meditation practice, it is possible for that state to be more consistent. I learned that summer at Wanderlust is the best way for me to clear my head and to live in the only place life can be lived.

I’ve read several times that people say they don’t have time to meditate, but that meditation gives them more time. I would sit and feel anxious about wanting to or feeling like I should be doing something else and would stop. I was missing the whole point of sitting in stillness with the restlessness, anxiety, and disinterest. It wasn’t until I learned through my immersion how necessary it is to sit with those feelings and arrive at the other end in stillness, into the present moment.

I understand the words now, how meditation can give you more time. We can waste time living in our heads filled with self-doubt, ruminations, anguish, and worry that stop us from doing the many things we are born to do.

To quote Davidji again, “What will you do with this sacred, precious, present moment?” 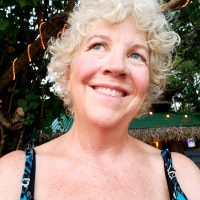 Yogi, seeker, reader, and traveler (currently in the Yucatan Peninsula and soon in Costa Rica). I am also interested in nature and cultural photography. I was inspired by the … Read full bio