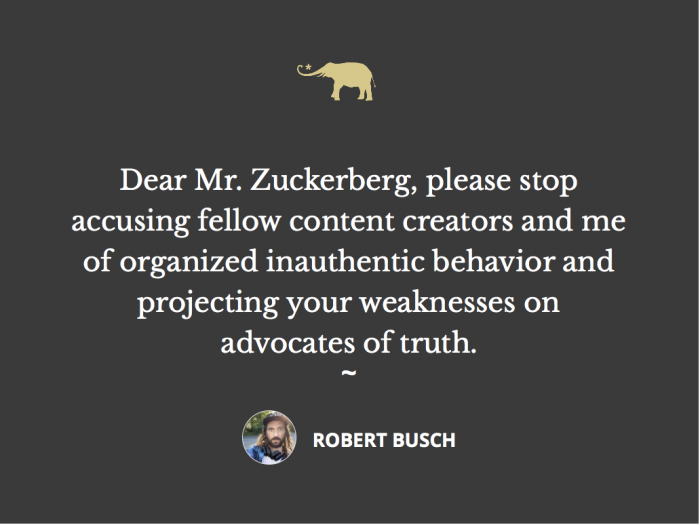 What’s the difference between networks intentionally spreading misinformation and an author who is trying to share his voice with the world?

Apparently, there is no difference between the two—if you ask Mark Zuckerberg.

Facebook had been under fire lately. It’s all over the news. Frances Haugen blew the whistle, I wrote about it—but algorithms were not on my side.

Anyone is welcome to criticize my writing, but calling my behavior inauthentic is an offense.

But that’s exactly what Facebook does. After writing an article, I always try to share it with as many readers as possible. I am sharing links, images, and quotes to drive attention toward my work. And I am by far not the only one doing that.

Unfortunately, I have to be careful not to share my links too often because algorithms might stop distributing these links to my friends and audience. If I am not careful enough, Facebook might even ban me from posting for a few days (which happened to me earlier this year).

How come Facebook is able to stop me from oversharing my articles on various topics but not able to stop political campaigns during elections in my home country Germany?

After the Green party nominated Annalena Baerbock as their frontrunner, it looked as if her party had a chance of winning the election. Shortly after that, folks on social media started bashing her. There was a campaign financed by a think tank called “INSM.” The main message was that the Green party would take away our cars, ruin the economy, and force everyone to stop eating meat.

Many Germans fell for that narrative and started sharing these perspectives—and they did that in an authentic way.

At some point, the anti-Green movement started to join forces with the so-called Querdenken movement, which is basically the German version of QAnon. These folks were annoyed by lockdowns, rejected vaccines, and started linking these topics with the efforts to combat climate change.

After these folks built a network of 268,000 followers, Facebook decided to block them 10 days before the actual election—but it was already too late.

Talking points of the Querdenken movement already spread all over the German internet, one of their leaders jumped on stage and ended up in an advertisement for the Conservative party, and I kept seeing these narratives on my feed shared by folks who really believed in these perspectives.

Zuckerberg didn’t stop them because their behavior was considered authentic.

But the main point is that nobody outside of Germany even cared about any of that. And that’s exactly how folks in India, Myanmar, Bolivia, and other countries feel when social media interferes with their elections.

If you think that Facebook is messing up American politics imagine what they are causing abroad.

Mark Zuckerberg spent a lot of money to look as if he was trying to be mindful about the effects of his platform on American politics—and he failed at that. But that failure is a little hiccup compared to what Facebook causes abroad.

It’s not easy to draw the line between freedom of speech and stopping fake news—but Facebook failed in the worst way possible.

Just as the American public, they don’t care much about politics in foreign countries. But 90 percent of all Facebook users are outside of the United States—that’s where they make most of their money.

It is undeniable that Facebook has a huge influence on public debates outside the United States. But who cares, right?

The root of all these problems is algorithms that decide what kind of content is showing up on our feeds.

By now, these algorithms should know that I am a quite liberal person leaning to the left—so, why do I keep seeing all these posts from friends with whom I completely disagree? Why are the first comments on my articles always from angry Conservatives, while my Liberal friends tell me that they never see my posts on their feed?

Frances Haugen recently explained that phenomenon: Facebook wants us to get angry, so we spend more time arguing with each other.

Mark Zuckerberg is probably much smarter than I am. There is no reason to believe that he is not aware of everything I just wrote. It’s just that he doesn’t feel like doing anything about it. He is doing what every businessman would do: trying to navigate legalities in order to keep his business going.

I don’t believe for a single minute that Zuckerberg even cares about me, my home country, or any other users on his platform. But he tries to present himself as the man who is working hard to fix what he broke—we are still talking about the “move fast and break things” entrepreneur who is accused of putting our mental health and democracy at risk to make money.

And there is only one way to describe this behavior: organized inauthentic behavior.

Dear Mr. Zuckerberg, please stop accusing fellow content creators and me of organized inauthentic behavior and projecting your weaknesses on advocates of truth.